On 17th March 2012, a global people’s march was called to commemorate the first anniversary of the Syrian Revolution with a demand to ‘an end the slaughter & carnage of innocent people by a barbaric regime.’ A video featuring conversations with Mohammed, the son of a Syrian Muslim Brotherhood member and a demonstrator, the procession and speeches from the day can be viewed here - 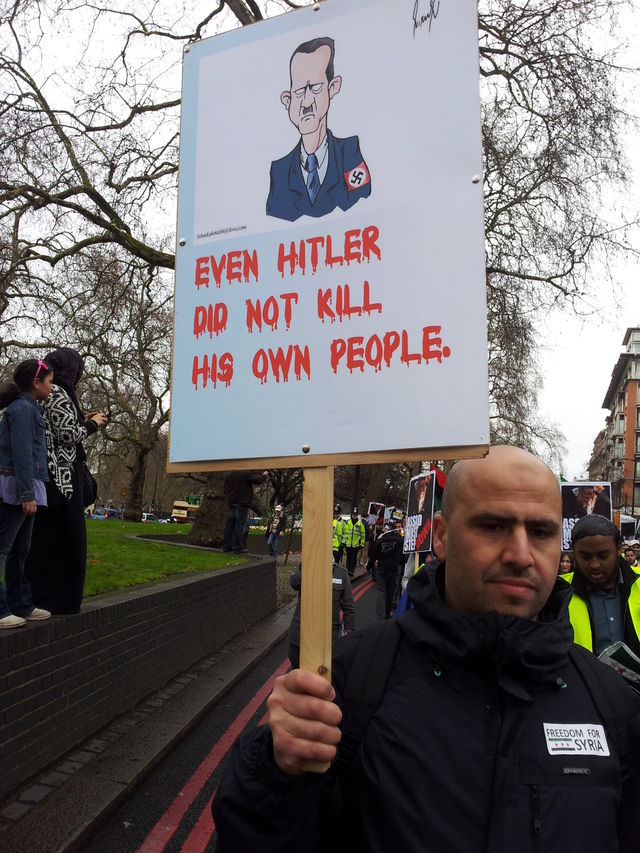 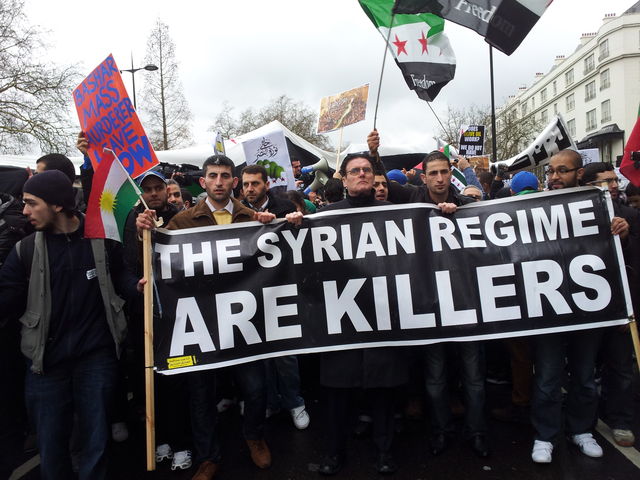 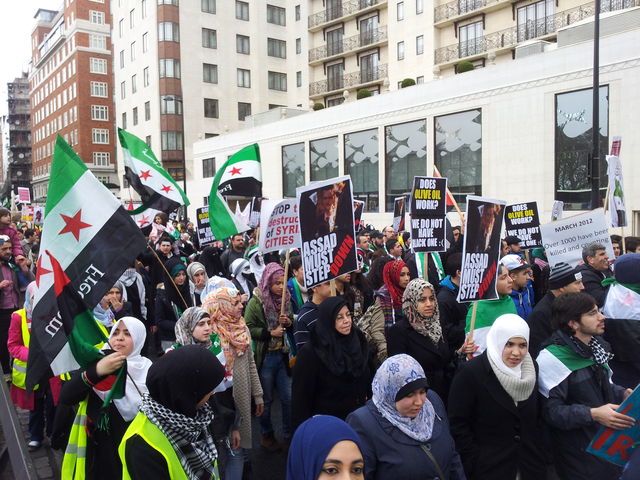 A global people’s march was called to commemorate the first anniversary of the Syrian Revolution. A video featuring conversations with Mohammed, the son of a Syrian Muslim Brotherhood member and a demonstrator, the procession and speeches from the day can be viewed here -

The London ‘Syria Global March’ proceeded from Paddington Green towards the Syrian Embassy in Belgrave Square, where speeches in English & Arabic were heard.

A demonstrator said, “I am here to send a message to the world & the Syrian people that I stand in solidarity with the Syrian people against the brutal suppression & oppression that their dictator Bashar Al-Assad has unleashed upon them, given the uprisings in Syria.” He explained that the uprisings were triggered by school boys writing anti-regime graffiti on the walls of a school, as a consequence their parents held a demonstration after their sons were tortured and from there the uprising spread across Syria.

Mohammed, a 21 year old British citizen, spoke of his father who has been sentenced to execution by the Bashar Al-Assad regime as, he is a member of the Muslim Brotherhood. His father has been unable to return to his homeland for over 30 years. He explained this sentence was passed by the Bashar Al-Assad regime in response to a movement vocalised by the Muslim Brotherhood in Hama. “Basically it was going to be a movement like this. It was going to be a revolution. The regime has been there for 40 years. The Muslim Brotherhood started the revolution in 1982.” “About 40,000 people were killed in Hama, my dad left the 1982 massacre, he was one of the people that were jailed and tortured.” “In approximately 1983, the regime passed a sentence that anyone who is related or part of the Muslim brotherhood has to be executed if he enters Syria”.

Mohammed suggested that only 10% of the Syrian population within Syria benefit from the Al-Assad regime. They are those largely related to or with links to the Al-Assad family or merchants and people with money and connections. Some of Mohammed’s family have left Syria due to “the poorness of the living life in Syria, due to the regime stealing all the money, life has been just terrible for the past 50 years of the Al-Assad regime in power in Syria.”

A demonstrator in reference to the current Syrian uprising said, “The movement essentially started as a peaceful movement calling for changes to be made to the way things happen in Syria, the way things are run, changes to the oppression & suppression of descent, the one party state, brutal dictatorship; the current dictator inherited it essentially from his father.” The Syrian authorities and regime responded, “They shot at, they killed peaceful demonstrators. I think after a while people realised that just peaceful demonstration wasn’t going to achieve their aims. After that with some army defections, soldiers defecting from the Syrian army refusing orders to kill women, children and innocent civilians, some defected with their weapons and now you see the emergence of organisations like the Free Syrian army.”

When asked whether he knows if there is a majority opinion in Syria on whether people want al-Assad to stay or go, he replied, “It is very hard to get an accurate representation of what people think from within Syria…it’s not an easy place to get accurate information out of but some people want Bashar Al-Assad to go, some people think that a negotiated settlement, maybe something similar to how Yemen was handled where the president relatively quietly stepped down and there will be people who want the president to stay.”

When questioned about his views on Hamas, in relation to the Middle East uprisings, he replied, “Hamas are a political movement within Palestine, they were based in Damascus, they have now come out against the Assad regime. There was a supposition that…the Bashar Al-Assad regime were somehow supporting Palestinian rights & how this revolution was somehow endangering Palestinian rights; quite the opposite. Quite early on in the conflict Syrian State forces shelled a Palestinian refugee camp within Syria and also let’s not forget that the Syrian regime has been in discussions with Israel about normalising relations and forming a peace treaty similar to that of Jordan. Let’s not pretend that the Ba’athist regime in Syria is a friend of the Palestinians.”

As an estimated 3,000 demonstrators of the ‘Syria Global March’ proceeded along Park Lane, an alternative procession of an estimated 200 demonstrators could be seen marching in the opposite direction. I believe their march was called the ‘Global March for Syria’. A YouTube page called ‘theliberatedzone’ provides the objective of their march was to, ‘mark one year of the Syrian people's resistance to the imperialist conspiracy to topple the government of President Bashar al-Assad and to say: "End the intervention in Syria - Don't Attack Iran - Defend Palestine". The demonstrators also paid tribute to the martyrs of the twin car bombs in Damascus today that claimed the lives of many civilians and members of the Syrian security forces.’

Carlos Martinez, a speaker at the ‘Global March for Syria’ rally said, “I have no personal or family connections with the Syrian State, so why do I defend Syria? …Because Syria is a key crucial component of the global resistance to imperialism and to Zionism, because Syria is an independent, socialist orientated, Arab nationalist, pro-Palestinian State that deserves to be defended. Because Syria is the country where Palestinian refugees can live with dignity and respect as equal citizens, because Syria is the only Middle Eastern country which provides financial military and practical support to Hezbollah which we all know is the most effective military resistance movement against Zionism…I defend Syria…Because of the people who oppose it…countries that appose Syria is Britain, the USA, Israel, Saudi Arabia, Qatar, Kuwait, Jordan”. Carlos’ full speech can be viewed here -

Mohammed is calling on the world to intervene, “It’s been a year now, our brothers have demanded for them to be protected by anyone in the whole world. They asked for a no fly zone; they weren’t given it. They asked for a buffer zone; they weren’t given it. There is no other solution but to say we want intervention…because that’s the only way to be protected. If not intervention, then give the Free Syrian Army who are protecting our brothers there in Syria, give them the weapons” to protect themselves. “The Syrian regime is simply criminal; it doesn’t know anything else other than blood, killing, slaughtering and torture.” He also explained that whilst the Al-Assad regime say they do not want any foreign interference and “the whole world says leave Syrian alone, don’t interfere, don’t give any weapons to the Free Syrian Army, the Assad regime are being supported by Iran, China, by Hezbollah in Lebanon, they are being given artillery, men, we have heard about two ships that came from Iran & Russian ships. Iran & Russia we understand say, ‘leave Syria alone…don’t interfere’; they are literally killing our brothers daily with their weapons”.

Jonathan Steele (former Chief Correspondent at the Guardian) wrote in his article ‘Diary’ on 22nd March 2012, ‘Some in the opposition still believe that dialogue with the regime is possible. Louai Hussein, a writer and journalist who spent seven years in prison in the 1980s without being put on trial and was briefly detained again last March, is the founder of an unlicensed NGO called Building the Syrian State. He not only rejects the idea of foreign governments sending weapons to the Free Syrian Army but believes that the FSA and local defence committees should not have taken up arms at all. The struggle against the regime should be carried out peacefully with demonstrations, strikes and civil disobedience. He wants a dialogue that would be more like a negotiation between equals than anything that has taken place so far. ‘The regime expects a dialogue in which it is the presiding power while we are nothing more than complainants or petitioners. They treat the crisis as a small problem. We reject that kind of dialogue. We only accept dialogue if it’s about transferring power and not if it’s led by the regime.’

Mohammed fears the future of Syria, “Bashar al-Assad now is getting his son ready to take behind him, just like his dad left the power for him. The whole world is silent because they want the Assad regime to continue protecting Israel, protecting the borders with Israel. America is silent, UK is silent. We know they are actually backing the regime, all they do is go on TV, talk, we don’t see anything done.” He also provided, “All the Arab countries have been actually standing with Israel rather than with Palestine. We have got Tunis, we’ve got Libya now, we’ve got Yemen. If Syria which borders with Palestine gets free, the Syrian people and the whole Bashar al-Assad regime knows that, Israel, America knows that; that if Syria is free, the next country for the Syrian people is Palestine.”

Mohammad explained that the Muslim Brotherhoods objectives now are much as they were in 1982, “they went out like now, asking for freedom, pure elections that the human in Syria can actually elect who he wants…the Muslim Brotherhood now have no power because the regime killed them literally. They are like any other Syrian now. They are just demanding what the Syrians in Syria want; the people who are dying every day want. Freedom, changing the regime, having our Syria back as it was before the Assad regime took it, pure simply, inshallah”.

In Islam there is a hadith, ‘None of you is a believer until he loves for his brother what he loves from himself.’ (Sahih Muslim).

It’s clear, all want an end to the bloodshed. I have not lived in Syria and spent my life under the conditions that Syrians have. I see some view this Syrian conflict as to how changes in the Syrian regime will affect the Middle East as a whole. For me, this is about Syrians, their lives, what they have endured, what they can no longer endure and their needs and rights.

Assalamu alaikum, Peace be upon you