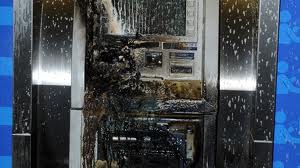 When we talk about solidarity, we cannot ignore $hile. Far away from the clashes there, we find ourselves in the same war against identical adversaries, just like our Chilean comrades.

The situation there drove us to carry out an attack on a target for which Tortuga will be dragged to court.

Last night (19-3/2012) in Berlin, on Bützowstraße (street in the locality of Prenzlauer Berg), we destroyed an ATM by fire. Actions against these machines are increasing over these last few years in Berlin too; in different contexts, they are identified as a suitable target and either torched or smashed with hammers.

Attacks on ATMs usually get gagging order in Berlin; so great is the fear of the rulers that this form of action will develop into a popular sport such as torching cars.

Freedom for Tortuga!
Freedom for all prisoners!
Solidarity with the anarchist struggle in Chile!