Spontaneous demo against privitisation of NHS

You know when you read a headline that just trips the world from under you? For those of us who'd been trying not to pay attention, there was a certain vertigo that came from seeing that last night they rubber stamped the privitisation of the NHS. You know, the NHS. That system that has saved the lives of probably at least half a dozen people you love. That remarkable outcome of struggle for a better world in our strange little country. The service that used to be about saying- making money out of illness is wrong. That free universal healthcare is too important to leave to buisness. They're selling it off. 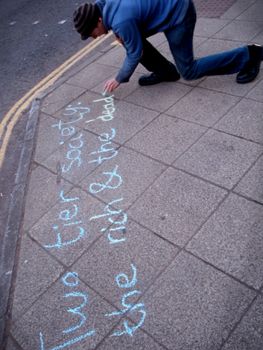 And within 40 minutes of a shout going out 20 or so folk had gathered outside the Bristol Royal Infirmary, to show solidarity with the people whose vocations and lives are threatened, and to get some commuter traffic honking, so that we can hear each others grief and defiance. I was a bit worried the car horns might bother patients, but the ambulance drivers were some of the most enthusiastic participants. It was great to just speak to people about it, to have banter with patients and staff and create a bit of space outside that wasn't about buisness as usual.

There's another one tomorrow at 4pm for a couple hours. See you on the streets.