An over eager Police officer has tried to use a law from Australia to prosecute a shopkeeper in Bargoed, South Wales. Rather than check his own Police manual, the dozy copper Googled the law on selling bongs and didn't notice that he had stumbled into the laws from New South Wales, Australia. 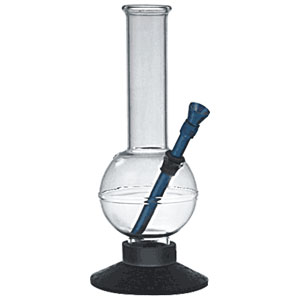 The shopkeeper in Bargoed, South Wales sells a wide variety of stock including pipes & bongs. These are entirely legal to sell in the UK; however it is an offence to sell these items if they are going to be used to take illegal drugs.

At midday on Thursday 22nd March 2012 the shop keeper had a visit from a uniformed copper who informed the shopkeeper that he was trading in illegal goods and that he must cease. He told him that if he failed to do so he would be arrested.

To back up this assertion the PC produced a document titled ‘MISUSE OF DRUGS AND TRAFFICKING ACT 1985 and drew the shop keepers’ attention to Section 11A of the act;

‘It is an offence to sell, supply or display for sale a bong or ice pipe, or the component parts of a bong or pipe, whether or not the bong or pipe was intended to be used to administer a prohibited drug.’

The copper refused to leave a copy of the act with the shop keeper. The shop keeper then called his wholesalers who have been trading pipes and bongs all over the UK since 1992.

A spokesperson for the wholesalers said 'We had never heard of this act and so searched online. We found the act on the Australian government website. The legislation was from

Shortly after the visit the shop keeper, who was shocked & intimidated by the visit, decided to visit the police station himself to seek clarification. The cop was not available but he managed to speak to a female police officer who backed up his version of the law. We await eagerly to see how this pans out. Will we all have to abide by laws made on the far side of the planet by Governments we haven't elected?