“No-one will want to listen to me after that!” 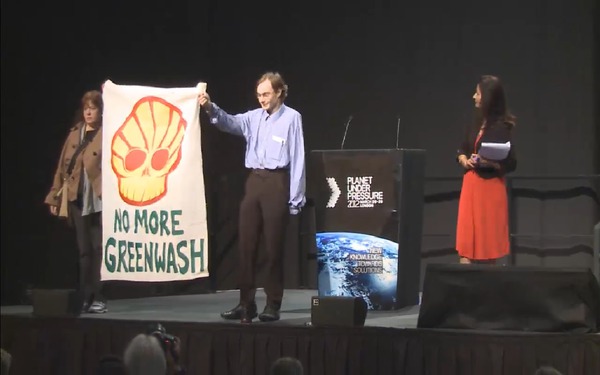 During a panel discussion entitled “The planet in 2050”, at the exact moment that Shell's senior energy advisor Martin Haigh was about to speak the two protesters walked calmly across the stage, banner in hand, and were greeted with a loud, spontaneous round of applause from hundreds of people in the audience. As the protesters left the auditorium they were rewarded with hand shakes, thumbs up and another round of applause. Haigh was flustered and responded with words along the lines of “No-one will want to listen to me after that!”

London Rising Tide are asking why Shell were ever allowed to take part in this conference in the first place, given their record of environmental and human rights atrocities in Nigeria, Ireland, and Canada to name but a few places, and their investments in carbon-intensive fossil fuels such as oil from tar sands and shale gas, while abandoning funding for renewable energies.

The action got a lot of support on Twitter: