Bristol anti-militarists paste a message on a billboard in St Werburghs, the day after the Pakistan President called for an end to US drone strikes and week before a planned protest at the Bristol drone conference. 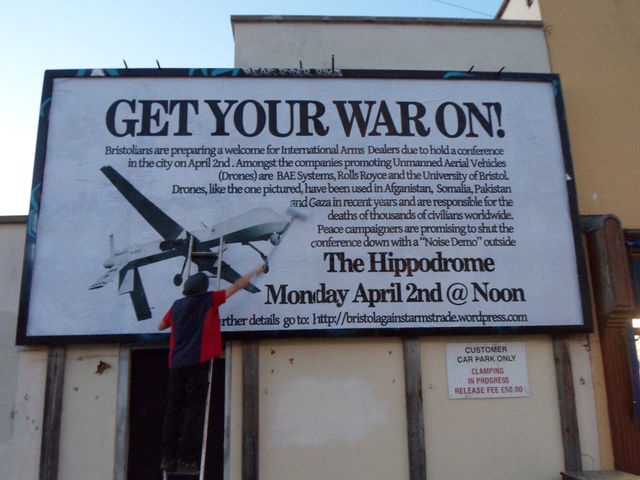 In a statement delivered yesterday  Pakistani President Asif Ali Zardari expressed support for parliament’s recent positions on the Pakistani-US relationship, saying they were a sign of “democracy taking roots in Pakistan.” Zardari’s statement even went on to directly address the most controversial aspect of US relations, the ongoing US drone strikes against Pakistan’s tribal areas. Zardari said that the strikes violated Pakistan’s sovereignty and were counterproductive.

Drones or unmanned aerial vehicles are pilotless planes which are used around the globe in armed conflicts. Civilians are the main victims.  Based on extensive research, the Bureau of Investigative Journalism (london) found that in Pakistan between 391 – 780 civilians were killed out of a total of between 1,658 and 2,597 and that 160 children are reported among the deaths. Pakistani reports claim the civilian death toll is far higher.

There isn’t a war in Pakistan but the death toll from drones is in the thousands. Legal experts and human rights organisations have condemned the rise in targeted extra-judicial killing enabled by the use of drones.

Monday 2nd April 12pm Meet At The Fountains – Opposite The Hippodrome  For a noise demo. A few folk will be starting out at 8am at the entrance to Telephone Avenue.
The Conference is being held at Armada House, Telephone Avenue. (off Baldwin St)