Ed Greens, 21 year old musical artist & poet from Camden Town, London performed at the Hackney Picture House yesterday. The show premiered the music video to ‘Screaming Revolution’ by Empdy x Ed Greens. I caught up with brother Ed to ask a few questions, particularly, how he came to start making ‘active’ music and why Palestine is a common thread in his music. 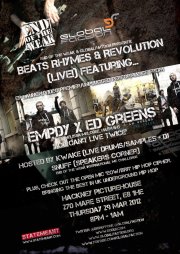 The show premiered the music video to ‘Screaming Revolution’ by Empdy x Ed Greens. The video, shot on the streets of London, sends out clear messages, including to ‘Boycott Israeli Goods, Stop Israel’s War Crimes in GAZA, this is our time, we are the people and unite together’.

I have been following Ed’s music for a while and find it refreshing & inspiring that he speaks from his heart about messages which include reality, struggle, deception and change. I caught up with brother Ed to ask a few questions, particularly, how he came to start making ‘active’ music and why Palestine is a common thread in his music.

What’s ‘Screaming Revolution’ about & what’s the message you are trying to get across?

“Basically, best way to describe it, it’s an expression of how we feel in the system we are living under. The message is, in order to change the terrible situation of the world, that a revolution is needed. That doesn’t necessarily entail a violent event.”
“We try to make music that highlights our situation here and abroad, to try and relate to a global struggle and what we want to see as a global revolution.”

What do you mean when you use the word ‘revolution’?

“For me a revolution is complete systematic change, whereby the structure of the system &/or the people at the top, are completely changed, to enable full equality amongst the people.”

How do references to Palestine & the ‘Boycott of Israeli goods’ in your video, fit into your song ‘Screaming Revolution’?

“In terms of empire and western imperialism, I would say the Zionist state is a modern neo-colonial project and acts as a military extension of the West into North Africa & Western Asia. Therefore, as people standing against empire we must continue to support the Palestinian struggle.”

What are your views on the ‘Occupy Movement’ in London and do you feel it’s a step towards achieving a revolution?

“As a human being, I perceive the word occupy as an adjective; not a noun or a brand name. Therefore, I do not associate myself with ‘Occupy London’ or any other group or organisation for that matter but I will use occupation to achieve anti-empire, anti-imperialist, pro people and pro equality political aims and therefore, I engage and support blockades like ‘Save our Leyton Marsh’.”

Have you visited Palestine & are you planning any trips there?

“I am going for 3 months to Palestine with the Camden Abu Dis Friendship Association (CADFA) to further their linking programme that links Camden with Abu dis. I will be working on a drama/film project, as well as maybe poetry and music with the children in Abu dis. This is my first time to Palestine. I am hoping to have time away from London, to be in another environment Inshallah, to get further on my deen and be of some use or encouragement to the Palestinian people. Twinning allows Palestinians to further feel the support of the international community by connecting with them.”

When did you start making music?

“I started freestyle rapping with friends at 16, messing around and then at around 17 I started to write stuff. I then added music to it and began to write full songs instead of freestyling to a beat.”

Does any particular artist or music inspire you?

“Definitely, like Skinnyman, Taskforce, Lowkey, Logic, Peoples Army, The Roots, Talib Kweli, De La Soul, Immortal technique, like… I could go on all day. I am a fan of all good music, including hip hop with good content that makes people think about their surroundings and their impact on it.”

Was there a first main political event which motivated you towards activism & if so, what was it?

“For me, the thing I kind of remember is 911 to a certain extent. I recall when I was younger, when I was first told about what happened I had an uncle in New York. When I heard that towers had fallen down I got worried for him because I thought from a physics & scientific perspective. I thought of a tower falling on its side and not on its footprint. Basically, I didn’t get politically active then as at such a young age. After watching documentaries and further research, the ‘official conspiracy theory’ that the mainstream media and government supported, I felt didn’t add up and on further investigation and reading of the ‘Official 911 commission report’, obvious we were not being told the truth. This led me onto researching different areas that we are often lied to by mainstream media or the government. This led me to understand that the world we live in is hugely influenced by a very small amount of families and individuals who maintain power over people and their resources. When I started to look at the colonisation of Palestine, it made me have a more urgent sense of action.”

What’s your message to people generally?

“Let’s come together and build for equality, Inshallah.”

One of my favourite songs by Ed, is 2 by 2 where he sings: “so we’ll try for that one and only means, doesn’t mean that we don’t have the right to self-defend, if you come with a tank running over my fence, doesn’t mean that I can’t still defend. What’s that? I might just throw a rock back but what’s that? I might just throw a rock back but really what’s that? Dedication, to the little kids in Palestine, throwing rocks, never stop. So I try, to stick to the righteous, cause I know together we can fight this, cause the revolution is inside us, literally and metaphysically, so they divide us, you’ve been taken for a ride bruv, no matter how they hide or disguise us, even if they use violence, we are never staying silent. Victory to the Intifada, Inshallah, peace, love, respect, unity.”

A discussion with Abdul Wahab, a Palestinian CADFA coordinator and a Palestinian student from Al Quds University (who both reside in Abu Dis) took place recently when they visited London as part of the CADFA exchange project. They shared their experiences, difficulties and struggles of living under apartheid Israel. Videos of these discussion can be viewed here:

Assalam alaikum, peace be upon you.