As part of a national day of action against workfare, Swindon Anarchists called a demo targetting local workfare using companies. 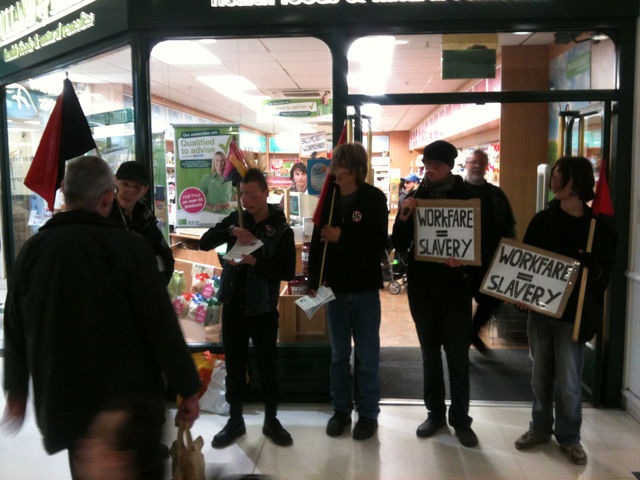 Outside Holland and Barrett 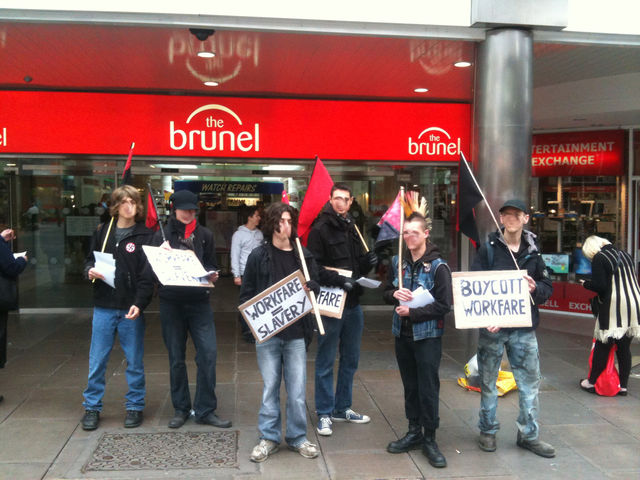 Along with radicals in around 25 other towns or cities, Swindon Anarchists held a protest on Saturday March 31st as part of a national day of action against workfare.
10 people turned up to the demo, which started off outside the local Holland and Barrett. While some activists leafletted outside, other entered the store, leafletting customers and workers and making a bit of noise.
Security from the privatley owned shopping centre turned up fairly quickly, but after being unable to prove that they were agents of the landowners, stood back and watched (some were pretty supportive, others not so!), waiting for the cops to arrive.
After 15 minutes or so, the demo moved to the front of the shopping centre where around 700 leaflets were given out to the overwhelmingly supportive public.
After the hassle that Swindon Anarchists have had from the local cops lately, we were suprised to find the one that turned up was happy to let us get on with it - not even bothering with the customary trawl for names and addresses.
After a couple of hours, we called it a day, moving off respectivley to the pub and footie.
Solidarity to all other anti-workfare demos on the day - especially Bristol (we hope your numbers weren't too low without us!).

To find out more about the workfare and the campaign against it, check out www.boycottworkfare.org or

To get involved in the swindon Anarchists group, drop an email to