A commemoration event at Abney Park Cemetery marked the 200th anniversary of the birth of Welsh peace-maker Henry Richard. Bruce Kent, who had re-discovered Henry Richard's grave in the overgrown Stoke Newington graveyard in north London was Master of Ceremonies. About 100 were in attendance, a big increase on a similar event some years ago. Many of those present came from Wales, some from Richard's birthplace, Tregaron in Dyfed. 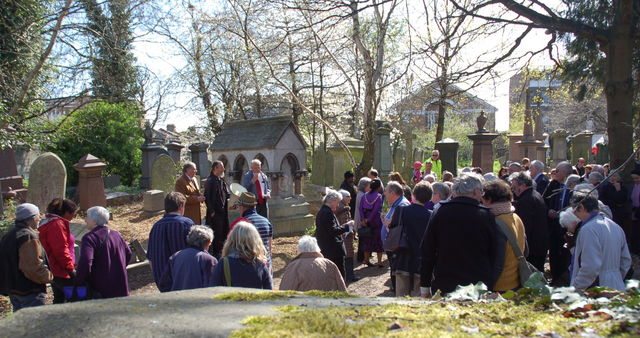 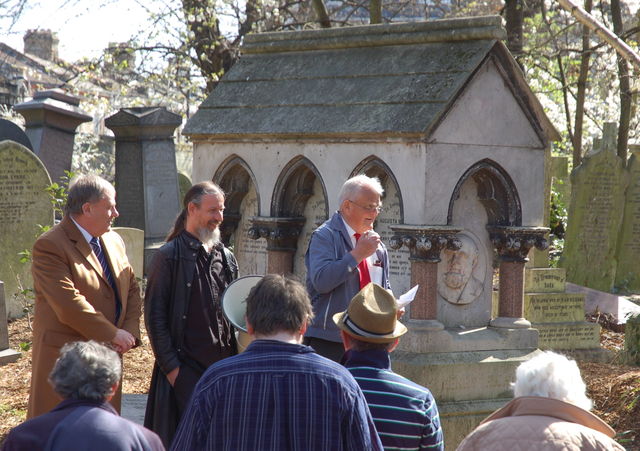 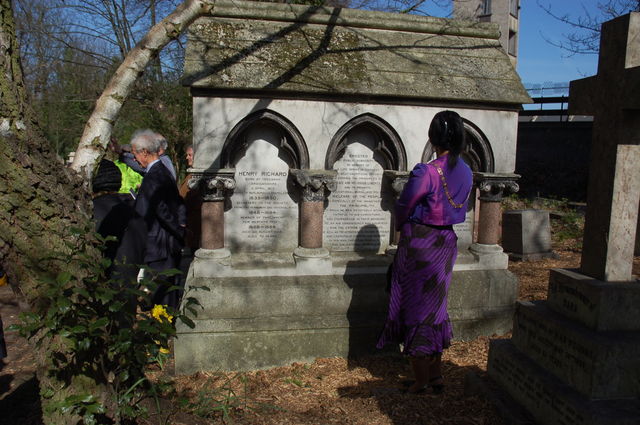 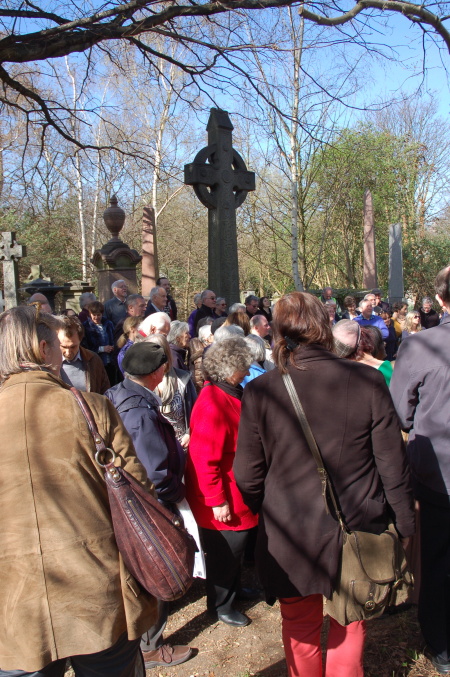 Bruce Kent introduced Councillor Susan Fajana Thomas, Hackney's Speaker, who didn't speak (unless I missed it) then handed over to Diane Abbott, MP, who said that many of the things Henry Richard campaigned for are as relevant today as they were 200 years ago. Her examples included Richard's interpretation of the causes of the Welsh 'Rebecca Riots' which the English government wanted to dismiss as 'mere criminality'; also his commitment to universal free education. Amazingly, the audience refrained from heckling Abbott at this point.

Welsh academic Kenneth Morgan spoke about Henry Richard as a man of peace and a citizen of the world. He was a Welshman and, while not a nationalist, he created the modern idea of Welsh identity. He spoke up for people who were thrown off their land by Conservative landowners if they voted Liberal; he was a great Democrat; he voted for women's suffrage and took up working class causes in south Wales. Morgan commented that Richard had helped create the free council schools and the first Welsh university. He was secretary of the Peace Society for many years and was an opponent of the Crimean War. He was known in Wales as Yr Apostl Heddwch (The Apostle of Peace). Morgan described Henry Richard as 'the valiant prophet of a better world'.

Afterwards, Bruce Kent observed that it is crucial to remember and celebrate the lives of people of peace because all too often they are forgotten, while those who wage war are remembered. He suggested that a statue of Henry Richard should occupy the fourth plinth in Trafalgar Square in recognition of his important work for peace. Henry Richard worked closely with Richard Cobden whose statue stands near Mornington Crescent station on causes including peace between Britain and France.

Abney Park Cemetery is run by a Trust. Someone from the Trust explained that this body had been set up in 1991 to take over the management of the cemetery, now designated a nature reserve. He mentioned another Welsh grave in Abney Park, that of Betsi Cadwaladr. Its exact whereabouts in the cemetery isn't known as she was buried in a pauper's grave with a number of others, but a headstone has now been erected in her memory. Cadwaladr worked as a nurse in the Crimea and the North Wales NHS Trust is named after her.

Finally, Bruce Kent said that although he doesn't sing, he was sure that the Welsh folk present would rise to the occasion, at which point they spontaneously burst into song (both in time and in tune!), choosing a traditional Welsh song 'Calon Lân': 'O Brave Heart'.

After the ceremony, refreshments were provided in St Mary's Parish Church further along Church Street.

This was one of a number of events, most of which are being held in Wales, to mark the bicentenary of Henry Richard's birth. See the latest 'Abolish War' newsletter for more details:

Another report on the day

Issued by one of the organisers, Hilary Evans:

Over 100 people gathered in the sunshine at the grave of Henry Richard in Abney Park Cemetery, Stoke Newington yesterday to hear Diane Abbott MP, eminent historian Lord Kenneth Morgan and Bruce Kent lead tributes to a great Victorian leader of the peace movement, Minister in the Congregational Church and Member of Parliament who once had an international reputation as The Apostle of Peace and campaigned tirelessly for a league of nations and a permanent system of arbitration to solve disputes between nations.  Speaker of Hackney Council, Councillor Susan Fajana-Thomas was also present.

Diane Abbott was proud that the celebration was taking place in ‘the best London Borough’ and pointed out that many of the things Henry Richard campaigned on are as relevant today as they were in the 19th century: for improved educational opportunities for all, against misleading press reporting and for better ways of resolving international disputes.

Lord Morgan described Henry Richard as a man of peace and a citizen of the world, while remaining a proud Welshman and creating the modern idea of Welsh identity. In addition to his great work for peace and education, he championed women’s suffrage. Lord Morgan called Henry Richard 'the valiant prophet of a better world'.

Daffodils were placed on the grave by Rhian Medi Roberts of the Plaid Cymru Parliamentary Office, assisted by 4 year old Hazel, daughter of Abney Trust Chair David Solman, then the Revd Peter Dewi Richards introduced two minutes of silence for people to reflect on Henry Richard’s life and work in whatever way each felt appropriate.

Afterwards, Bruce Kent observed that it is crucial to remember and celebrate the lives of people of peace because all too often they are forgotten, while those who wage war are remembered. He suggested that a statue of Henry Richard should occupy the fourth plinth in Trafalgar Square in recognition of his important work for peace.

The Trustees of Abney Park were thanked for their hospitality and the excellent work they do. John Baldock spoke about the work of the Trust and mentioned another Welsh grave on the site - that of Betsi Cadwaladr, a nurse in the Crimea, buried in a pauper’s grave.

Finally, Bruce Kent invited the Welsh folk present to sing something suitable to the occasion and they rose magnificently to the challenge, giving a wonderful spontaneous rendition of the traditional Welsh song Calon Lan sung in full harmony: very appropriate, referring as it does, to a true and steadfast heart – Henry Richard was well honoured!

Following the ceremony, the party continued with tea and cakes in St Mary’s Church hall.