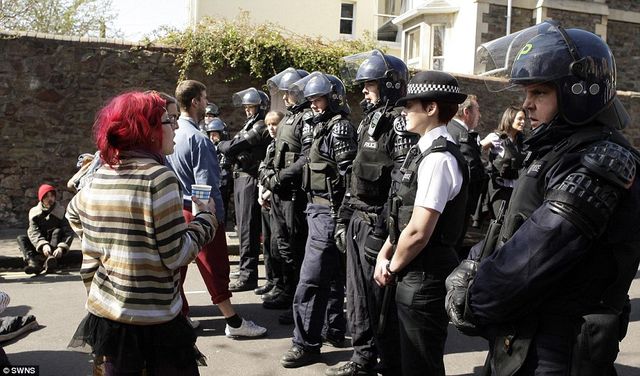 1st April: Squatters face up to riot police after the illegal morning eviction 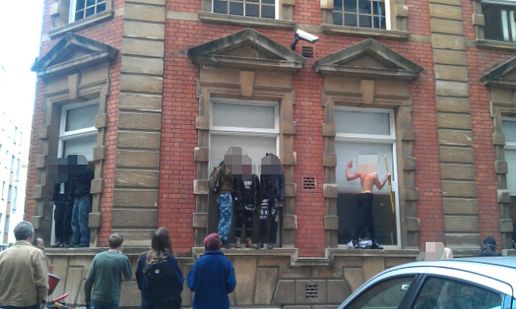 After losing to a possession order in court from the Bank of Scotland, squatters held another party at Clifton Wood House that ended with 11 arrests. At about 6am, police gained entry to the £3 million mansion under the Criminal Justice Act due to noise complaints, where they were met by a crowd of 35 angry ravers. The party goers then successfully resisted attempts to shut down the party by charging the cops to remove them from the building. Police responded by calling backup involving 50 officers, who closed off Clifton Wood Road, and proceeded to illegally evict the squatters from their home and seize sound equipment.

This led to a series of arrests from public order to assault pc as individuals attempted to resist the police led eviction. The video (

http://www.liveleak.com/view?i=04c_1333336265) shows someone bleading from the nose during arrest and being threatened with a taser, followed by another person being dragged off in a neck lock by an officer defending himself armed with CS spray. Currently five people ranging from 17-19 years old have now been charged; two with assault pc (one who also has resisting arrest) and another two with section 5 offenses.

The next day in the centre a noise demo outside the 27th International Bristol Drone Conference consequently led to more arrests. Starting at around 9am on Telephone Avenue, by about midday around 80 people were making a loud racket with a sound system, pots and pans and a live band. Members of Palestine Solidarity Campaign, Bristol Against Arms Trade, Smash EDO and Bristol Amnesty took part in the action in solidarity with those facing drone attacks abroad in state warfare. Drone attacks have led to thousands of civilian casualties in conflict areas, and are often referred to as “remote killing machines”.

A Palestinian flag was promptly hung at Armada House where the conference was taking place as people stood on windows frames banging windows to cause maximum disruption, while several arms dealers relied on the cops to leave due to the attention given by activists who pursued the warmongers around town. In response police arrived at 2pm with 5 support vans, initially seizing the sound system, then blocking off Marsh Rd before advancing from Baldwin Street towards Telephone Avenue after also blocking the road. They began attacking the demonstration, who strongly resisted being moved, leading to 7 people being arrested/detained on various different charges. These included public nuisance, public order, breah of the peace, obstruct pc and assault pc, as well as someone re-arrested in relation to the Clifton eviction.

Four out of the seven people arrested were eventually taken to to trinity road police station, after which activists held a solidarity demonstration outside the main entrance. The demo was lively with music and a fire place made from a washing machine drum to keep themselves warm. When police came out to demand that the fire be extinguished, protesters simply picked up the drum and moved it across to the roundabout much to the annoyance of the police who were having to carry a bucket of water. This happened again a few moments later when the fire was moved back to it’s original place and the police came out in larger numbers with an idle threat to call the fire service. By the end of this rather humorous game the police went inside to ‘research’ laws on contained public fires.

Eventually three out of four of the people arrested were released on bail with ridiculous conditions, for example a suspect was not allowed to congregate with 3 or more persons at a time. A bit weird, but it is the Avon and Somerset police we’re talking about here. The remaining person in custody was held overnight and was due in court the following morning. Additionally 3 people waited outside Southmead police station where others were taken, as nervously paranoid police covered up numbers plates on exiting the compound – concerned an anarchist database was being created!

As a result of the protest two activists are fighting the cases in court, while one person has been fined £150 for a section 5 offence (causing ‘alarm, harassment or distress’), someone accepting a caution, and another bound over for breach of the peace but charged with vandalizing a police cell.

It goes without saying Bristol Defendant Solidarity, Bristol Anarchist Black Cross and Bristol Anarchist Federation express full solidarity with all those arrested, charged and otherwise violently repressed by the police over these two days. While other groups may keep their distance, we will continue to support individuals through the courts and with their fines.

A benefit gig has already been organised to support the anti-drone and clifton defendants (full details to be announced very soon) while squatters and activists aim to legally oppose the eviction and police response to the noise demo, which were both caught on camera. Furthermore there is a march in solidarity with squatters facing evictions, charges & additionally threatened with homeless through the criminalisation of squatting.