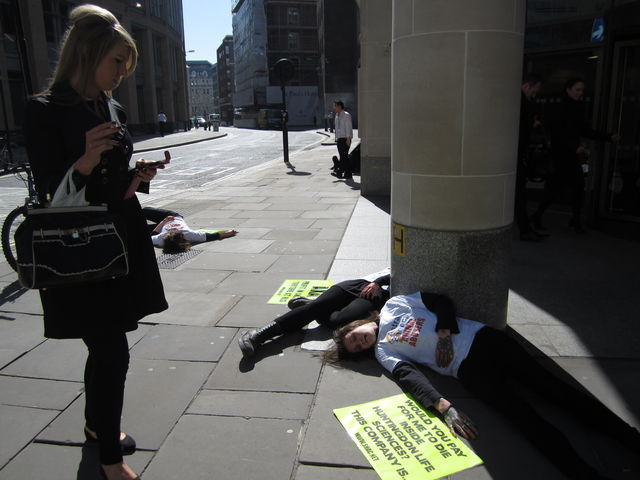 A few activists wearing t-shirts with the AZ logo and the words “AstraZeneca animal abusers” on them and fake blood smeared across their faces, made their way to the first target of the day; BlackRock, alongside a giant ‘injured rabbit’.
As they walked up the paved area in front of the UK HQ, the activists and rabbit began to collapse, one by one.
Within a minute or so, there was a trail of ‘corpses’ leading up to the entrance doors.
As the BlackRock staff became aware of what was happening outside their building, they looked on with a mixture of bemusement, intrigue and shock.
However, upon closer inspection the staff (and members of the public walking past) were able to read the placards that were laid out near the bodies, explaining BlackRock and AstraZeneca’s involvement in the bloody vivisection industry at HLS.
After activists were sure that there was no doubt as to why they were there, or what their ‘deaths’ related to, they moved on to the next location.

The second target of the day was Legal & General, another shareholder of AstraZeneca.
This time, activists surrounded the pavement outside the main entrance, with the injured humans slouched against the nearby bollards and the rabbit sprawled across the entrance.
With this area being a busy thoroughfare, there were many City workers walking past the demonstration, many of which stopped to read the placards, look at the activists ‘injuries’ and take photos of the gory scene that had unfolded outside of L&G’s office.
As the stunt was taking place outside the windowed front of Legal & General’s reception, the staff and visitors inside could be seen staring out at the protest, clearly distracted by the company’s dirty secrets being highlighted so visually.

A while later, the demo moved onto Axa’s Investment Managers office (activists thought they’d appreciate being surprised at a different office to usual).
Once there, the dying humans let out screams of pain, before collapsing just in front of the building.
However, the rabbit struggled through long enough to attempt to hop towards the doorway and beseech the staff for help, but before they had chance, their injuries overcame them and they too fell to the floor.
After a few minutes of fitting and yelping, the rabbit finally laid motionless like the humans.
This location had a lot of tourists wandering past, along with the City workers and staff from Axa itself.
Dozens of people stopped to look and take photos of the bodies and placards.
Eventually, a confused copper arrived on the scene, but after ambling around for a few minutes looking from the activists, to the Axa sign above the entrance and then back to the activists again, he finally decided to stand across the road contemplating the situation (or when his next tea break would be…).

Sometime later, after making sure the stunts had the intended impact upon the staff and public, the activists finished the actions for the day.

AstraZeneca can be certain that there will be plenty more future stunt actions against them however, whilst they continue to contract work to HLS.
While AZ continue to keep the scummy vivisectors inside Huntingdon Life Sciences in business, SHAC will continue to highlight their bloody involvement.

Video of the stunt:

...I genuinely do, I think the work it has done does loads to highlight the suffering and murder and torture that HLS is involved in and SHAC also works to show up the companies involved in funding and supporting HLS - all that is to be supported and congratulated.

However, it is my personal opinion (troll disclaimer: 'my personal opinion') that the only way to make HLS suffer, and ultimately to lead to their demise, is to hit them where it hurts: kill their profits. Unless an action intends to hurt their profits, then it will only be a symbolic gesture to the animal lib movement, a way of saying 'we did this to say we're still here' and to get some more public on side. like i said, those actions are still needed, so im not taking anything away, rather im saying HLS need to be killed off, starved of profits, their profit channels killed and destroyed. I'm using these words on purpose, as they are the words that best describe what is needed.

If I could, I'd wipe HLS off the planet....but I do not have the means (and these days for various reasons, also lack the true motivation) to do it, so until that day comes when they can be closed forever, well done to all involved, although hand on heart, i wish the ALF/affiliated comrades would fuck them off for good......

Here's some figures from HLS'own accounts:

Profit for the year

HLS are struggling with the recession, time to finish them off. Get out into the streets and into the night...