Pull up the GM wheat, or we will, say growers

Bakers, retailers, growers and grassroots food campaigners threw down the gauntlet today over the controversial trialling of Genetically Modified wheat in the open air this spring. Campaginers under a enormous banner made of toast, delivered an ultimatum to DEFRA (the government department responsible for the release of GM crops) 'pull up the GM wheat or we will'. This wheat is a massive contamination risk we will not allow it to flower! 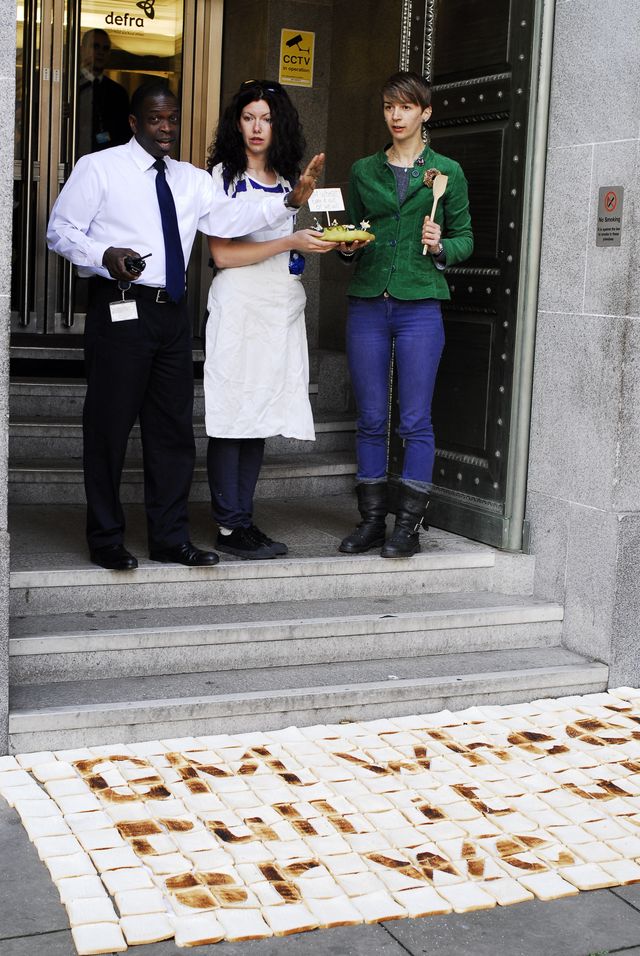 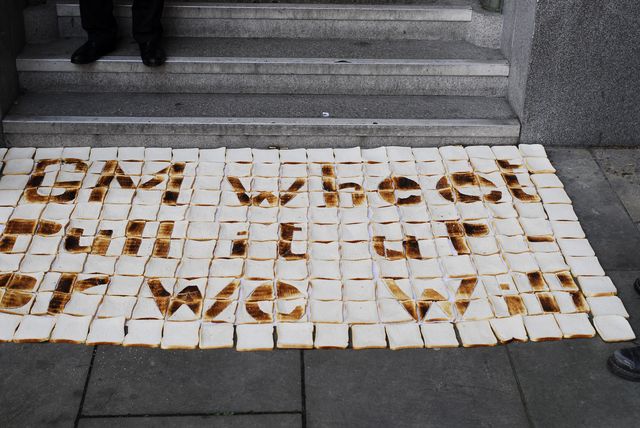 Jo Walker from the Community Food Growers Network said: “There is no market for GM wheat anywhere in the world, so any accidental escapes from this trial will have devastating consequences. We know from experiences in North America that experiments can and do leak into the food chain, and cost farmers millions in lost exports. This GM wheat contains parts of a virus, traits for antibiotic-resistance, and man-made genes ‘most similar to that of a cow’, it’s hardly surprising no one would want to eat it.”

The network of groups and individuals, who have come together under the banner ‘Take the Four Back’, say that the GM trial presents a clear risk to UK farming, and has urged the government to pull it up, adding that “if the government won’t resolve this problem, we’ll be forced to publicly remove the plot ourselves.”

Ruth Barnes, a pensioner from Hertfordshire (where the trial is taking place) added: “Voters have rejected GM in debates and on supermarket shelves, and yet the head of DEFRA, Caroline Spelman, is a former GM lobbyist who approved this GM trial despite expert scientific advice to the contrary. We’re not holding out much hope that she’ll start listening to the public. So we’re inviting people to join us to ‘Take the Flour Back’.”

‘Take the Flour Back’ will be a day of action with a public picnic and mass decontamination on Sunday 27th May, starting 12 noon at Rothamsted Park, Harpenden, Hertfordshire.” It will also bring UK campaigners together with the many people resisting GM in other parts of the world, with voices from Latin America, Asia and Africa opposing the technology and this trial.

£1.28 million of public money has gone into the trial, at Rothamsted Research Centre, Harpenden, which is designed to repel aphids, yet the team creating it hope to sell the patented GM seed on to a major agro-chemical company.

1. This trial is testing a brand-new synthetically-constructed ‘fake’ gene that is “similar to that found in peppermint…’ and have ,‘ most similarity to that from cow’… (Rothamsted Research Institute).”

2. The trial in question is designed to emit an alarm chemical which aphids give out when under attack, thus repelling them. Research by US and German scientists in 2010 found that aphids adapt to ignore this chemical after 2 years of exposure[1]. Aphids infestations effect winter wheat, but not spring wheat. The trial involves spring wheat.

4. The proposed trial is an 80 metre by 80 metre plot surrounded by industrial fencing currently being installed directly adjacent to the field containing the world’s oldest classical scientific experiment into grasses, at the Rothamsted Institute in Harpenden.

5. Wheat is self and wind pollinating. Risks anticipated by the Institute in their consent release form include out-crossing with wild relatives, like the common weed, couch grass.

6. The UK government last conducted a public debate on GM in 2003 (GM Nation), it demonstrated a categoric rejection of the technology. All the major UK supermarkets ban GM ingredients from their own brand products. Europeans have so firmly rejected the technology, that the only company trying to push through new GM varieties in the Eurozone, BASF, pulled out entirely two months ago.

7. The world’s largest union, La Via Campesina, which represents over 20 million struggling farmers across the world, regards GM technology as a serious problem, because of its inherently less stable nature, its threat to the diversity and resilience of seed varieties of which they are custodians, and because it hands over what was free to corporate control. “The crises (in food and climate) are real but solutions won’t come from expensive, patented and controlled technologies set forward by a handful of transnationals. Indeed, these techno-fixes may pose further risks to hunger, health, environment and biodiversity”. Via Campesina, ‘GMO’s Steal Our Future’[2]

8. Despite over 2 decades of promises the biotech industry is yet to produce any improvements in salt, drought or disease resistance. The two main varieties of GM sold globally are for herbicide resistance (which has massively increased the use of weedkiller) and inbuilt pesticide.

9. Wheat is Britain’s main domestic staple and one of our largest agricultural exports, worth over £1.5 Billion last year. Scotland had the world’s highest wheat yields in 2011.

from plants does not serve as a direct defense against aphids”. Bio Med Central Ecology 2010.