Protesters dragged out of BP AGM after board avoids uncomfortable questions 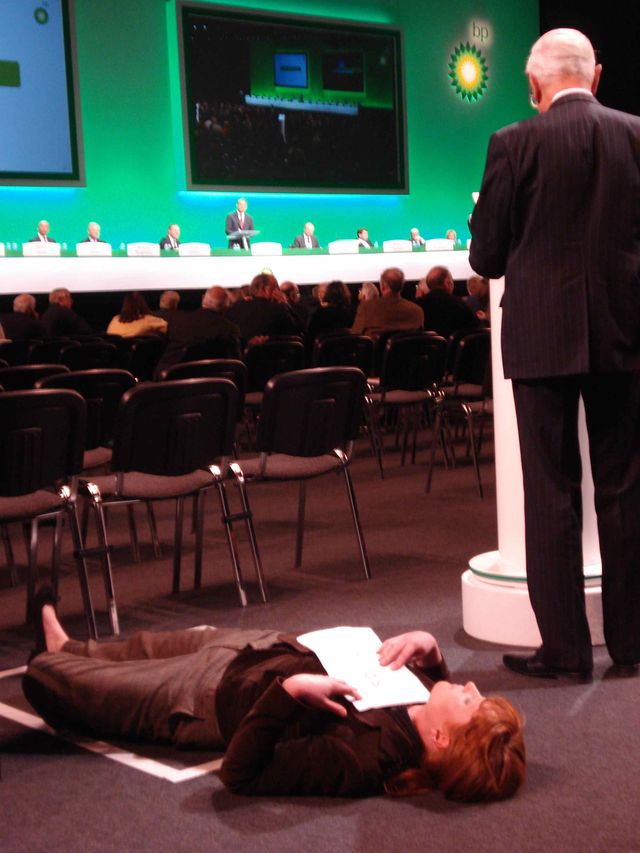 BP’s Annual General Meeting yesterday was once again an uncomfortable experience for the Board. They were confronted by questions on oil spills, tar sands, Olympic sponsorship and interplanetary escape pods, before nine people “died” in protest at the company’s contribution to climate change and human rights abuses, and were removed bodily from the room by security guards.

Early in the meeting Bryan Parras, representing devastated communities on the Gulf Coast, began to explain how the financial and health impacts of BP’s 2010 Deepwater Horizon spill were still having a huge effect on people and livelihoods, and that BP’s supposed compensation fund was not reaching those who needed it. However, he was interrupted partway through his question by the BP Chair, Carl-Henric Svanberg, and told to hurry up. Speaking after the meeting, Mr Parras said:“Last year, I was barred from this meeting by BP’s security, along with other community representatives. While I was glad to be allowed in this year, I was insulted that the Chair tried to cut me off, and that the Board then completely ignored my question and instead reeled off their prepared PR spin.”

Derrick Evans, from the Gulf Coast Fund for Community Renewal and Ecological Health, also commented: “It was good to be able to meet with the BP Board member Ian Davis, who is the Chairman of the Gulf of Mexico Committee and so has responsibility for ensuring that BP is keeping its promises to the people of the Gulf Coast. However, we were disappointed to learn that he knew nothing about the problems we are facing on the ground. He has now agreed to visit affected communities and see for himself what’s really happening, and so we look forward to helping him to fulfill that promise.”

As the meeting progressed, BP refused to acknowledge questions about whether tar sands extraction could be classified as “Ecocide”[1] and about the measures they were taking to lobby against the EU’s proposed Fuel Quality Directive [2], which would restrict the import of highly polluting fuels such as tar sands oil. Clayton Thomas-Muller, a tar sands campaigner from the Indigenous Environmental Network, asked a question about a crucial legal challenge that has been launched by the Beaver Lake Cree First Nation in Canada. If successful, this could make tar sands extraction illegal across large swathes of the country, including the leases owned by BP. Once again, the Chair simply ignored the question and made some unrelated comments in reply.

One question that did receive a response was about Olympic sponsorship. Although Iain Conn, the Chief Executive for Refining and Marketing, declined to give an exact figure for the company’s lavish sponsorship deal, he did say that BP had written a business case for Olympic sponsorship “going through exactly the same processes as we would for any investment”. He said that the aim of their role as Oil and Gas Partner, sponsor of the Cultural Olympiad and Sustainability Partner was “brand protection and connection with customers and society”, and to “enhance their relationship with strategic commercial partners”, and that the company’s expectations were being met in these areas. These comments confirm that these kinds of sponsorship deals bring significant returns to the company and are all about the bottom line.

Other questioners pointed out that the business plan laid out in BP’s Annual Report was based on fossil fuels still providing 80% of the world’s energy in 2030 – a scenario that would result in runaway climate change and global disaster on a massive scale. The meeting then took a slightly bizarre turn when a shareholder told the Chair that “if you’re planning for this level of social collapse then presumably BP must be building some kind of interplanetary escape pod in a secret bunker somewhere, for the Board and major shareholders”.

To laughter from around the room, he went on to ask where the pod would be sent (“The Moon, Mars or somewhere deep below the Earth’s surface?”), and whether tickets were available for purchase. When the Chair refused to respond, a total of nine UK Tar Sands Network protestors were noisily “killed by climate change”, dying in various locations around the conference hall, and had to be carried or dragged out by security.

There was also a colourful protest outside with music, speeches and leafleting of shareholders. The events at the AGM have now been heavily covered in the mainstream media, with several key points coming through strongly: the Deepwater oil disaster has NOT been cleaned up, and BP are under fire for their role in the tar sands and climate change (as well as high executive pay).

The UK Tar Sands Network are planning future interventions and actions, including at Shell's AGM in London and the Hague on May 22nd. Contact

info@no-tar-sands.org for more information and to get involved!

[1] Ecocide is a potential new crime against peace which is gathering momentum in the environmental law community. See

[2] The Fuel Quality Directive aims to reduce emissions from transport fuels in Europe by 6% by 2020. See www.no-tar-sands.org/campaigns/ceta/#FQD