Two anti-war protestors will go on trial in London on Fri 20th April for action at Downing Street last October to mark 10th Anniversary of Afghanistan - both also face ASBO
Fr. Martin Newell of the London Catholic Worker and Chris Cole from Oxford are charged with committing Criminal Damage on October 7th 2011 during a blockade of Downing Street organised by the London Catholic Worker. Red paint was poured to symbolise the blood of the 25,000 civilians and 2,500 soldiers who have been killed or wounded in the last decade. Six activists blockaded the entrance to Downing Street for an hour before being arrested.

In a statement, the protestors said

"For more than a decade British, US and NATO forces have been engaged in an on-going war in Afghanistan which has caused the deaths of thousands, wounded countless numbers, destroyed local communities and uprooted families. The reality of course is that war cannot bring peace, nor will armed violence ever solve political problems. Just the opposite in fact. Ten years is more than enough time to learn this lesson. Let us bury the dead, heal the wounded and end the war."

Martin and Chris will argue that their actions were reasonable in the circumstances of ten years of sustained war on the people of Afghanistan. Ben Griffin, a former soldier who served in Afghanistan and Maya Evans, who has recently returned from Afghanistan, are planned as witnesses for the defence.

The pair have been served paper indicating that the if convicted they face the imposition of an Anti Social Behaviour Order (ASBO) which will exclude them from the Whitehall area of central London for a period of ten years. The pair have vowed to fight the ASBO arguing that war is the great anti-social activity of our time

Supporters of the pair will gather outside Westminster Magistrates at 1.15pm, the trail begins at 2pm

Original report from the action: 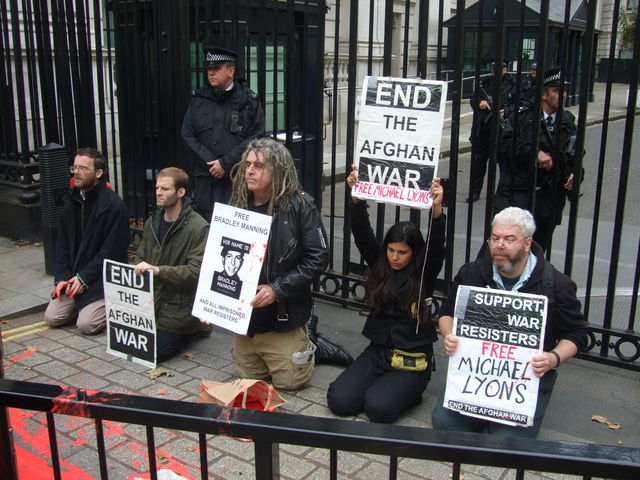 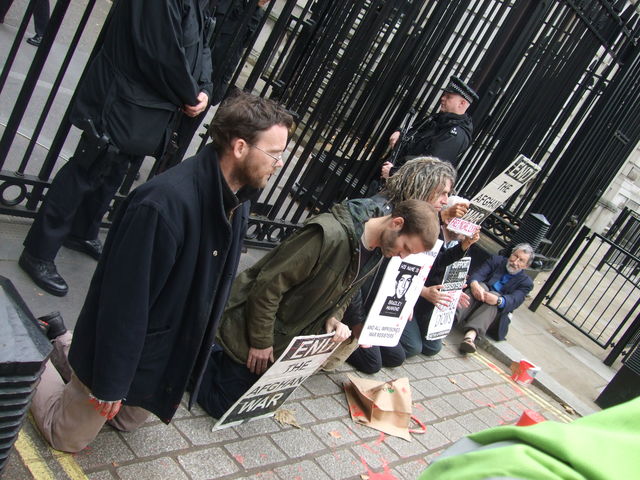 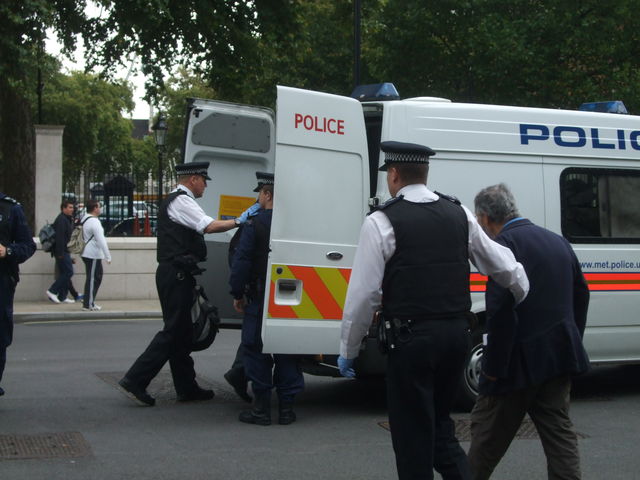 Members of the London Catholic Worker movement blockaded Downing Street today on the tenth anniversary of the start of the Afghan war. Red paint was spilt on the ground symbolizing the blood that has been spilt during the conflict; banners were held; names of the dead were read out.

Today marks ten years of tragedy. We - the US, the UK, and our allies - have spent ten years bombing, shooting, killing people in Afghanistan. A war that started a mere 26 days after the horror of 9/11 carries on to this day.

A group from the London Catholic Workers gathered this morning at the seat of power - Downing Street - to call again for the war to stop. We split red paint on the ground to remind us of all the blood spilt during the conflict; and we read out the names of some of the dead. May they never be forgotten.

We also blockaded the entrance to Downing Street - to at least create an inconvenience for the machine of power that drives this war. And we called on those passing by to join us, to wake up from their stupor and see this war for what it is.

For there's a numbness which has descended on the British population with regards to Afghanistan. We don't talk about it, we don't curse it, very few of us organise against it. Unlike the war on Iraq which was routinely pilloried and condemned, Afghanistan just keeps going and going and going, while we look away.

And yet it's a tragedy on the scale of Iraq, and with as little point. As I write there have been 2676 Coalition deaths through the duration of the American-led war (first called Operation Infinite Justiceand now Operation Enduring Freedom), also including the NATO operation known as theInternational Security Assistance Force. What is more the trend is ever upwards - pretty much every year is worse than those that came before it, with 2010 the worst so far. Who knows how 2011 will end?

Calculating casualties on the Afghan side (civilian and military) is a whole lot harder of course. People who do counts on these things generally preface all their numbers with the caveat that they are probably underestimating. The main source of the figures that follow, Prof. Marc Herold, has described the figures he came up with as an absolute minimum and probably a vast underestimate.

And yet the numbers are still appalling: 6000-9000 civilians killed directly (violently) by the Coalition, roughly the same number killed directly by the other side. A further 3000 - 20000 (that's quite a range) dead as an indirect result of the conflict. By any measure this is a momentous tragedy. Now imagine scaling it up to account for all the dead that no one counted. And then add in the untold numbers of Afghans and others who died fighting the coalition invasion; we call them the bad guys but they still bleed red.

We should also note that the same upward trend applies to these figures too: every year is worse than the last. In 2010, for instance, Marc Herold's ``vast underestimate" is that some 2777 Afghan civilians were killed, a jump of 15% over the previous year. We hear in the news that progress is being made in Afghanistan but how can this be, when every year is worse than the last?

The numbers are appalling, but they're still only numbers. Do they measure how bad a war has to get before we think we should end it? What's the maximum number of casualties that we can collectively stomach? How many mothers and fathers need to wake up screaming each morning before it's no longer OK to keep killing their children?

Pics and video of action

can be viewed at