Dissolve secret agencies and police – Anarchy in the EU!

According to a protocol of the EU Council working group on “Terrorism”, the European police agency EUROPOL is organising a conference on anarchism on the 24th and 25th of April 2012 in The Hague. According to media reports, there will be a presentation by the Italian delegation on the activities of the „Federazione Anarchica Informale“ (F.A.I.) and the conference will also discuss actions against “railway infrastructures” and against the “No Border Network”.

Very much in line with general European politics, the actual content and intention of the organisers remains in the dark. What, for example, is meant by the term “railway infrastructure”: It seems reasonable to assume that it refers to the protests against the “railway infrastructure” Stuttgart 21 in Germany as well as the high speed connection “Treno ad Alta Velocità” (TAV) which is planned from Turin to Lyon. Both projects were strongly opposed by local communities and this resistance has of course also been strongly supported by a variety of Italian and German left social movements. In this context the German government speaks of “left wing extremism and terrorism” and its alleged “attacks on train transports”. 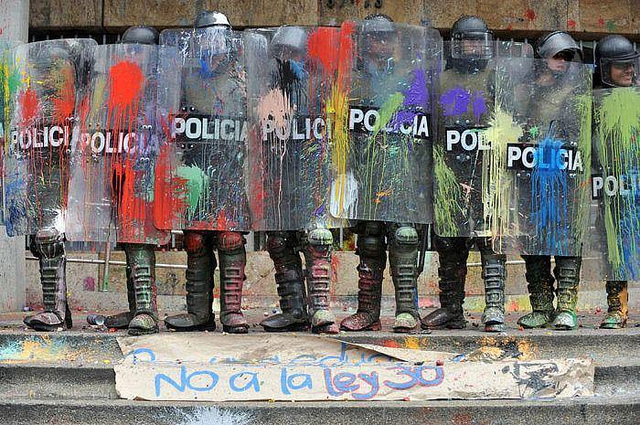 It can be assumed that the planned EUROPOL conference aims at shifting the legitimate resistance against pointless large-scale projects and dangerous technologies into the focus of conservative securocrats. This would fit the picture of the governments’ politics and their police, which repeat untrue claims that protestors would accept fatalities and should be classified as “terrorists”. Thereby it is the police themselves which endanger lives, namely by using violence and terrorizing methods against politically engaged people. Recent examples are the No-TAV activist “Luca”, who suffered from life threatening injuries after falling from high attitude because of police action; or the young man who was shot in the head with a rubber bullet by a cop at the Spanish general strike against the capitalist policies to tackle the crisis.

“96 Anarchists” and the “NoBorder Network”

According to the German government, activities of the “No Border Network” will also be addressed at the conference. Again, it remains unclear what this really means. Since the early 90’s organisations in solidarity with migration organise frequent cross-border protests, camps and campaigns. With boats on the Mediterranean Sea organsing under the slogan “boats for people” for this year it is planned to protest against the inhumane and often fatal violence of the EU border agency FRONTEX.

Possibly the above refers to incidents on the No Border camp in Brussels 2010: In an unprecedented manner Belgian police forces tried to stop people from the camp joining the international union protests in solidarity.

Here it seems likely that the later uncovered police spy Simon Bromma helped with his “insights”, which he communicated daily to the state criminal police in Stuttgart. Possibly, misleading information subsequently reached the Belgian authorities, which then lead to the arrest of the “96 Anarchists”. As was later reported by a police spokesman, without giving further explanations. The arrested activists were neither carrying “prohibited articles”, nor were they engaged in “criminal behaviour”. It therefore seems pretty clear that the arrests were only due to their “anarchist” convictions.

The German Federal Police Office for criminal Investigation (BKA) also equates left activism with alleged militant “anarchism”. In January 2011 its chief executive Joerg Ziercke was questioned by the Bundestag’s committee on internal affairs and asked to shed light on the question of why his agency maintains an extensive exchange of undercover agents with Great Britain. Ziercke justified the governmental infiltration of the mobilisation against the G8 summit 2007 and the NATO summit 2009 with an alleged “Europeanisation of the anarchist scene” in Greece, Spain, Great Britain, France, Denmark and Germany. He also justified the use of British undercover agents at the G8 summit in Heiligendamm in order to act against “Euro Anarchists, militant left extremists and terrorists”. Before his statement, the term “Euro-Anarchists” was not commonly used in German. Meanwhile, even the liberal middle-class Pirate Party is being considered as having an “aggressive stance against the state” and their conception to be seemingly “anarchist”.

The EU secret service Sit-Cen also deals with the “phenomenon anarchism”. Last October, the agency compiled a “situation assessment”, to which the German federal office for protection of the constitution, a further secret service, also contributed. EUROPOL itself publishes the yearly “Terrorism Situation and Trend Report”, with newly acquired insights. According to this report based on information from Germany, Sweden, the Czech Republic and GB, “anarchist extremists” support “anti-capitalism, anti-militarism, anti-fascism and the ‘No Border’ campaign”.

Only recently it surfaced into the public, that EUROPOL also observes cross-border campaigns of environmental and animal rights activists. Based on these “insights” the police agency organises regular conferences on so called “animal rights extremism”.

Observations and insights on “terrorism” and “extremism” are stored by EUROPOL in the rather extensive so called Analysis Work File (AWF) “Dolphin”, which can include proper dossiers on persons, objects or the progression of events. According to the German government the meeting on “Anarchism” on the 25th of April takes place in the realm of an invitation to all 20 member states of the AWF “Dolphin”. Not only by being listed in the Dolphin database are political activists criminalised. From May on a variety of AWFs are planned to be restructured under the labels of “organised crime” and “terrorism”.

“Anarchism” or the alleged “Euro-Anarchists” is rendered an umbrella term for politically unwanted international left activism. However, anarchism is moreover a political conviction, which opposes domination of people over other people, like any kind of hierarchy that suppresses individual and collective freedom. A philosophy such as this, which endorses and demands individual freedom, self-determination, equality and self-actualisation, as well as mutual respect and solidarity, ought to be respected by the freedom-embracing project that the EU purports to be.

The criminalisation of legitimate resistance against “railway infrastructure”, “train transports”, the murderous activities of FRONTEX as well as the ideological motivated defamation of anarchism is reason enough to be angry and furious. The fact, that once again a Berlin Senator for the Interior is attempting to criminalise the protest of local residents against increasing rents (recently in form of the protest against BMW Guggenheim Labs), by for example speaking about “left troublemakers” and the alleged “location risk”, proves the current rulers’ fear of the successful resistance of those subjected to their rules.

That is the reason why on the 25th of April at 5 pm we will make our way to the BKA branch in Berlin Treptow to clearly demonstrate our displeasure about EUROPOL’s “anarchism” conference, the daily racism in Europe and the equation of anarchism and left activism with “terrorism”. In addition to that, the route of the protest will also allow us to address the sickening, capitalist urban restructurings, same as attempts by the Berlin repressive agencies to intimidate in the run-up to the 1st May.

The system is criminal – not the resistance!
Our “intolerance” against their oppression – Stop the rent sharks!

Out of Control Berlin