We're currently in Wales taking action for and in solidarity with Bradley Manning - the young US soldier with Welsh roots incarcerated without trial for two years and tortured for sharing the truth about wars being fought in our name - as the National Theatre Wales performs Tim Price's play 'The Radicalisation of Bradley Manning' in Pembrokeshire, Cardiff and Flintshire during April. This is a summary of events and actions to date. 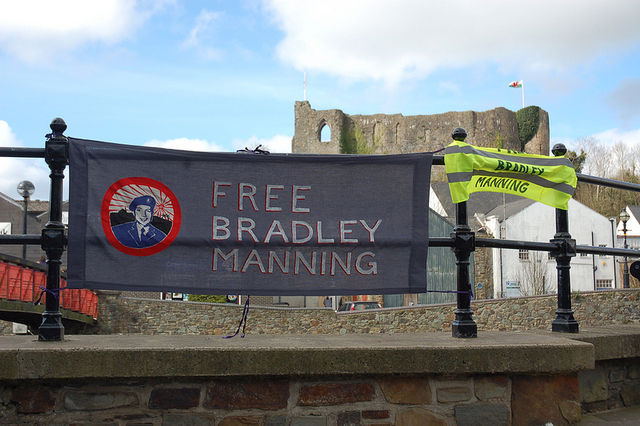 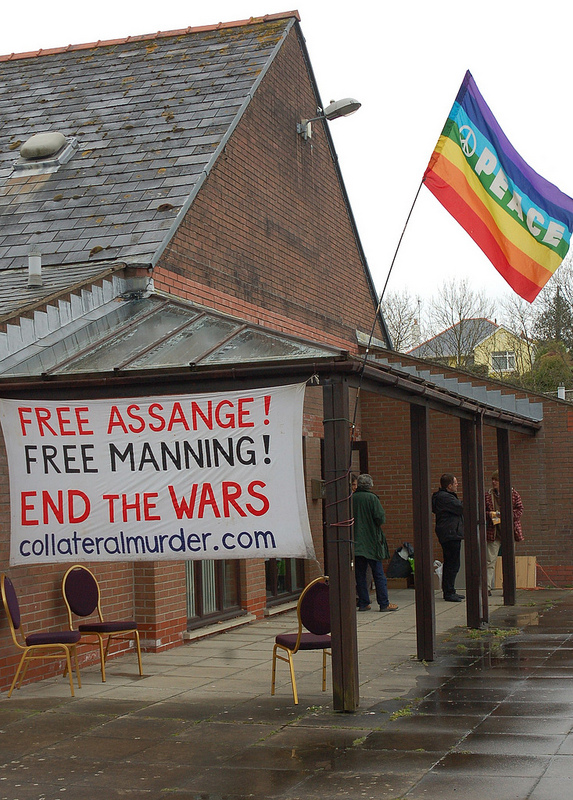 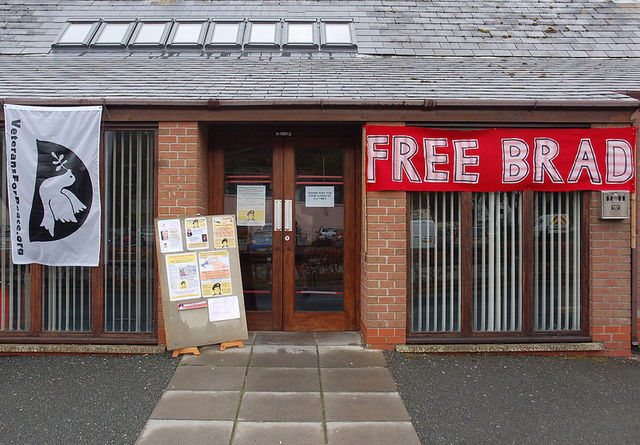 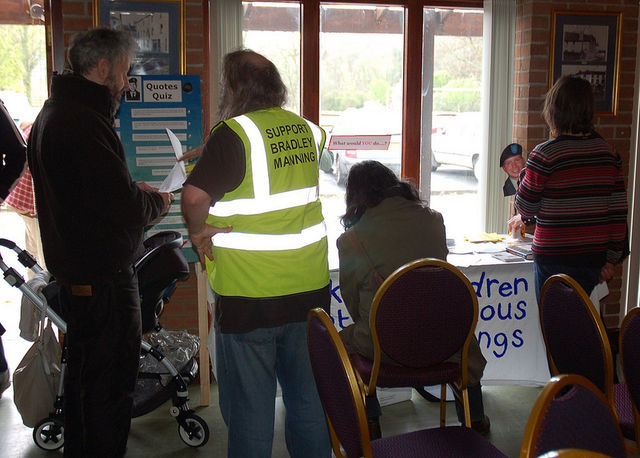 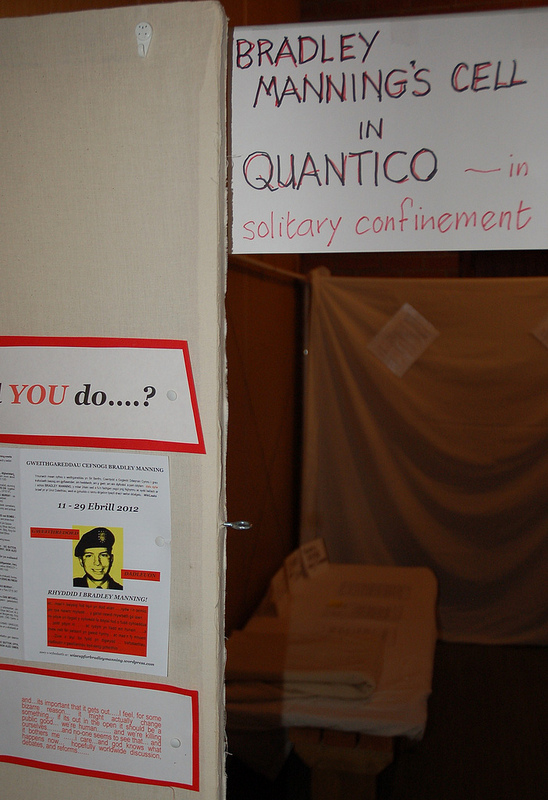 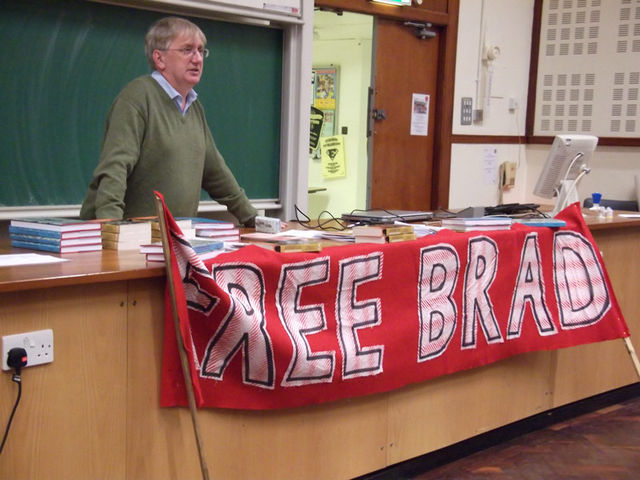 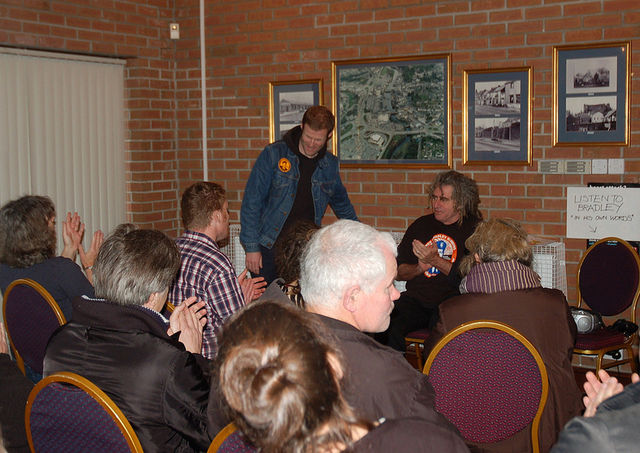 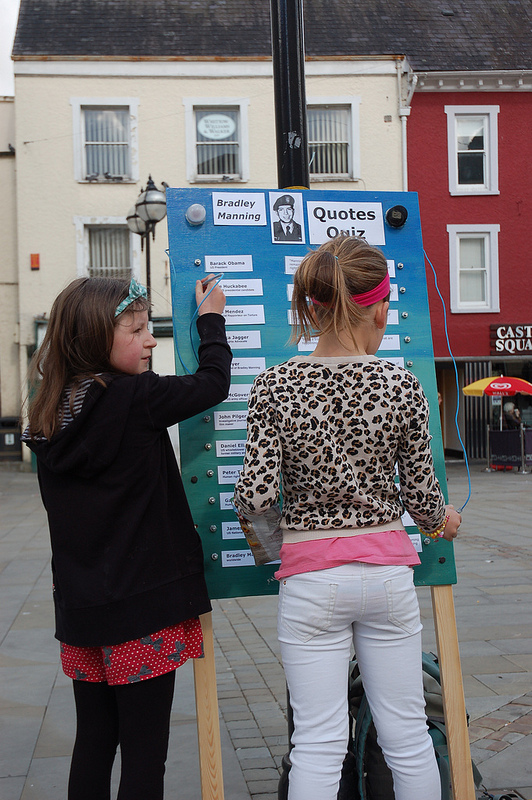 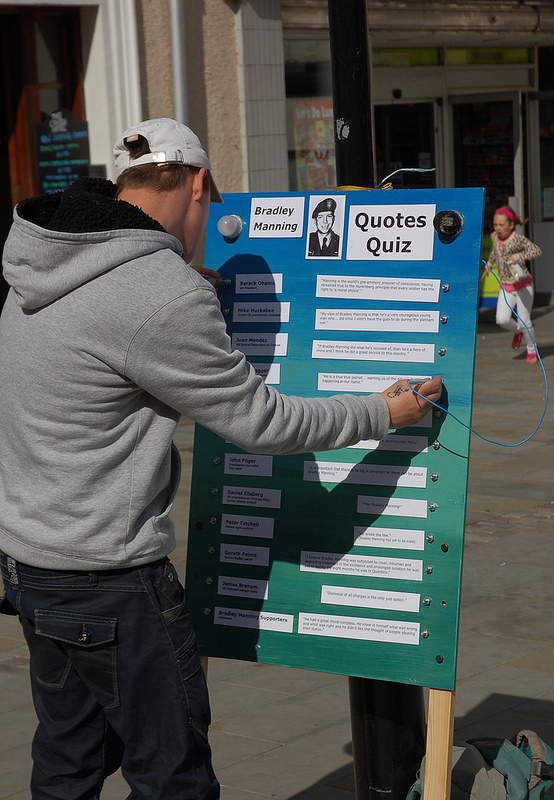 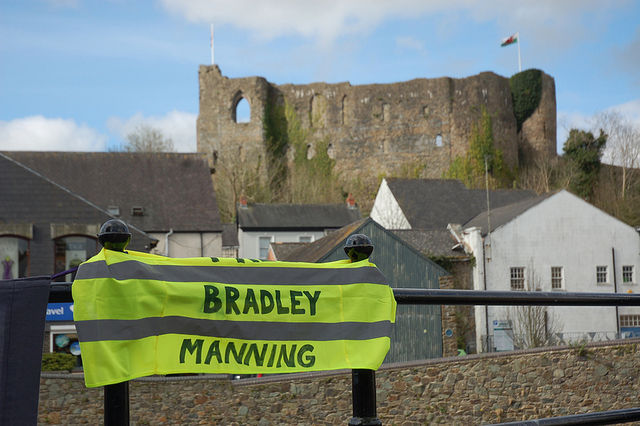 Read ex-SAS soldier and Veteran for Peace Ben Griffin's review of the play here. The play is also being live streamed for some performances. More information here.

Bradley Manning lived and went to school in Haverfordwest for several years as a teenager. As the play launched at his old school, Tasker Milward, we were on the streets of Haverfordwest with flyers and an interactive quiz speaking to local people about Bradley Manning. We have also been handing out information after every performance of the play.

On Friday 13 April, there was an afternoon exhibition about Bradley Manning at the Picton Centre in Haverfordwest, including a mock-up of Bradley Manning’s cell at Quantico where he was tortured with long-term solitary confinement and other cruel and unusual punishments until April 2011. The exhibition was left in situ for the evening when a ‘Transition Town’ supper was taking place at the venue.

Ben Griffin (ex-SAS and whistleblower) and Ciaron O’Reilly (ex-prisoner of the US and long time anti-war activist) spoke on the subject ‘War in the 21st Century’, putting Bradley Manning’s situation, the WikiLeaks releases and the state and anti-war responses to both into context; a similar talk by Ben and Ciaron took place on Saturday near Newport.

Guy Smallman's photographs from Afghanistan are on display until 24 April in Cardiff Central Library (2nd floor, near the lifts) alongside information about Bradley Manning in an exhibition entitled 'Speaking Truth to Power in Words and Pictures'. More information here.

At an evening meeting at the University organised by the Wales Council for International Affairs, Craig Murray spoke about his experiences as UK Ambassador to Uzbekistan in 2002-3 and the circumstances that led to him becoming a whistleblower over UK-sanctioned torture.

Guy Smallman spoke briefly at the beginning of this meeting about his link with Bradley Manning. Guy has been to Afghanistan on numerous occasions, visiting and photographing places and events that are largely ignored by mainstream western journalists. On 4 May 2007, NATO bombed the village of Granai in Afghanistan and admitted to killing at most 25 civilians during the attack. The Afghan government, the International Red Cross and other organisations concluded that over 140 were killed, all non-combatants. Guy visited the village two weeks after the bombing. He was shown 70 fresh graves, some holding entire families and at the end of the graveyard a single mass grave.

At the same time that he is alleged to have passed the Collateral Murder video to WikiLeaks, Bradley Manning apparently also handed over an encrypted film of the cockpit footage from the Granai attack. WikiLeaks is reported to be working on decrypting this so it can be put in the public domain. One day, we may get to see the footage of this attack and the evidence of what really happened.

Events over the next week or so include:

Information point at the Campaign Against the Arms Trade regional meeting at Chapter Arts in Cardiff, all day Saturday 21 April. More information here.

Stand Up, Stand Up for Bradley Manning! Comedy gig with Steve Parry and friends at the Yard Bar and Kitchen in Cardiff on Sunday 22 April. More information here.

Free Food, Free Bradley Manning! From midday on Tuesday 24 April. Solidarity action on the day Bradley Manning returns to court at Fort Meade, Maryland. From midday outside Cardiff Central Market (entrance near St John's church). There will also be a solidarity vigil outside the US Embassy in London at 5pm. More information about both events here.

Meeting for and about whistleblowers in Denbigh on the evening of Friday 27 April. More information here.

Gig for Bradley Manning at Saith Seren in Wrexham with Welsh and English poets and musicians on the evening of Sunday 29 April. More information here

WISE UP for Bradley Manning