****If you can't make it to the tribunal at Ft. Meade or the U.S. embassy in London, consider making a public stand for Bradley Manning on April 24th., 25th. or 26th. wherever you are - as he stands before a military tribunal that wishes to bury him alive!
Bradley has now been in military custody for over 700 days! 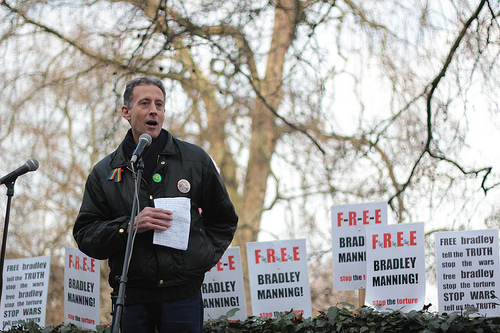 http://petertatchell.net/ will speak at a solidarity vigil for Bradley Manning at the U.S. Embassy on Tuesday April 24th. 5pm

Bradley Manning a 24 year old U.S. Army intelligence analyst, faces life in prison or the death penalty for allegedly sharing a video of U.S. war crime in Iraq with the WikiLeaks website.

http://www.collateralmurder.com/ Manning has also been charged with blowing the whistle on the "Iraq War Logs", the Afghan Diaries", "Guantanamo Files", and embarassing U.S. State Department cables.

Peter Tatchell stated,
"If Bradley blew the whistle on war crimes, he deserves a medal - not a jail sentence. All the charges against him should be dropped. The people who should be prosecuted are the US military personnel who committed the crimes, not the man who allegedly exposed their criminal actions."


The solidarity vigil is being organised by
London Catholic Worker


DIRECTIONS TO SOLIDARITY VIGIL AT U.S. EMBASSY
- Closest tubes to the U.S. embassy in London are - Bond St., Marble Arch, Oxford St. Hyde Park Corner
- Map to get to the embassy


* Bradley Manning is facing 23 charges one carrying the death penalty, accused of exposing war crimes of the U.S. military in Iraq and Afghanistan

* Bradley is being brought back to Ft. Meade Maryland on April 24th. 25th & 26th. for a pre-court martial prosecution motions hearing. Solidarity activists in the U.S. will be heading to Ft. Meade to attend the hearing and protest outside the base.
Bradley is in jail for us, we're on the streets for him.
End the Wars! Free Bradley Manning! Drop the Charges!

http://youtu.be/p1yOoHCNbqE
*Activism in Wales around the Play - Report & Photos

HOW TO VIEW THE PLAY ONLINE?
*****You can view the play, online anywhere in the world in real time, on the following dates & times (British Standard Time). You need to go to this link to register before viewing.....

At this stage, the play won't be archived for later viewing.
So if ya want to see it, here's ya chance!


PHOTOS - THE SOLIDARITY LONG HAUL IN LONDON AND BEYOND 2010-2012
A year of photos of solidarity with Bradley Manning and Julian Assange in London and elsewhere.

There are also solidarity actions presently planned at......

There are also solidarity actions presently planned at the gates of Ft. Meade, Maryland /USA and 14 cities world wide