A Report on Sizewell Camp 2012

The fourth annual camp at Sizewell nuclear power station took place from Friday 20th to Sunday the 22nd of April 2012. The aim of the camp is to make information available to local people about nuclear power, and to oppose the building of the two planned reactors, Sizewell C and D, and the dry fuel storage dump. The camp takes place in April to commemorate the Chernobyl disaster which occurred on 26th April 1986. 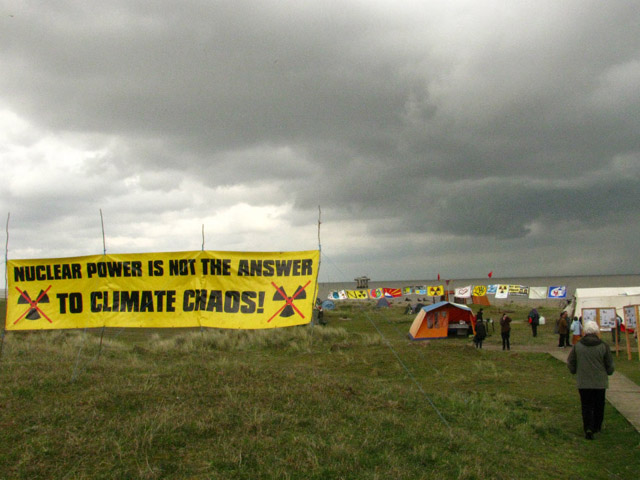 sizewell camp from the car park 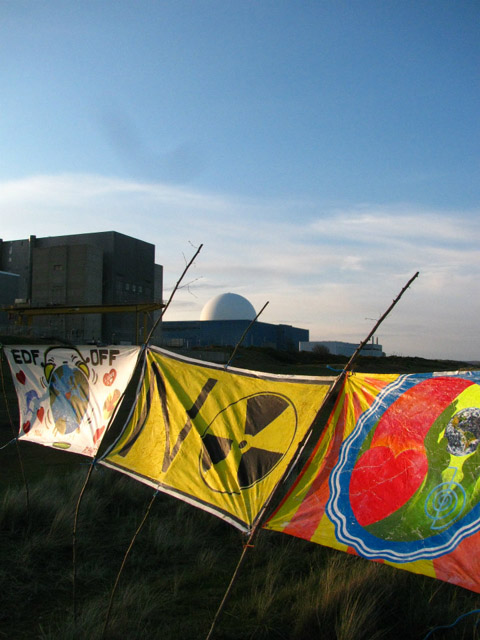 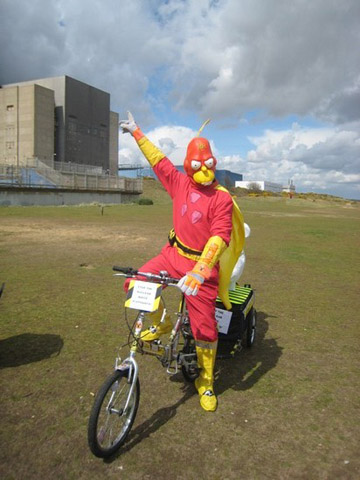 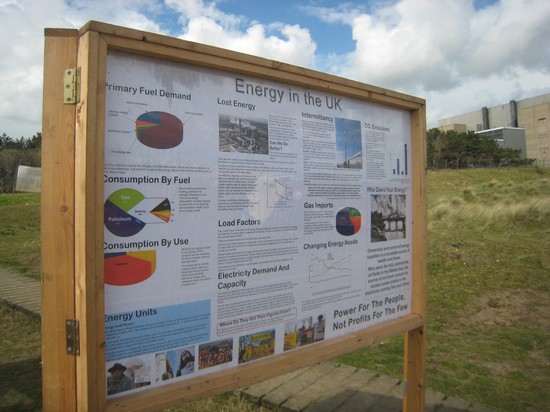 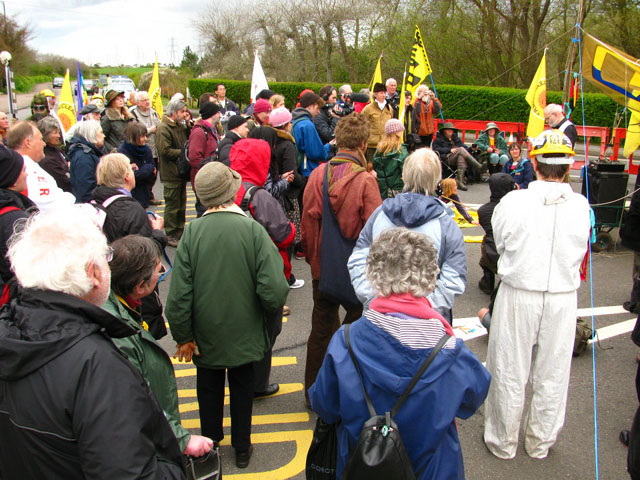 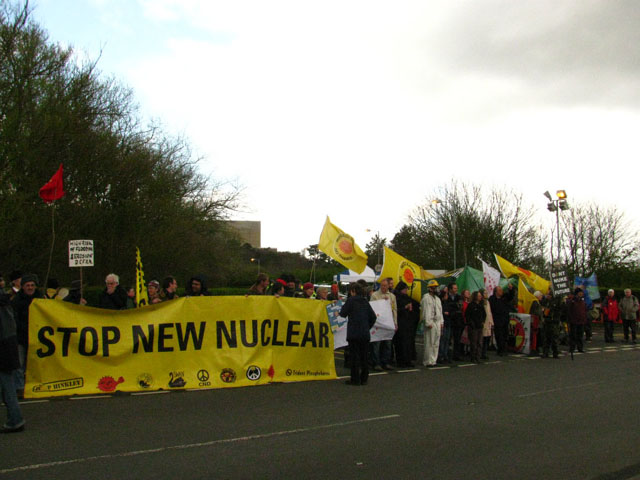 end of the sizewell demo 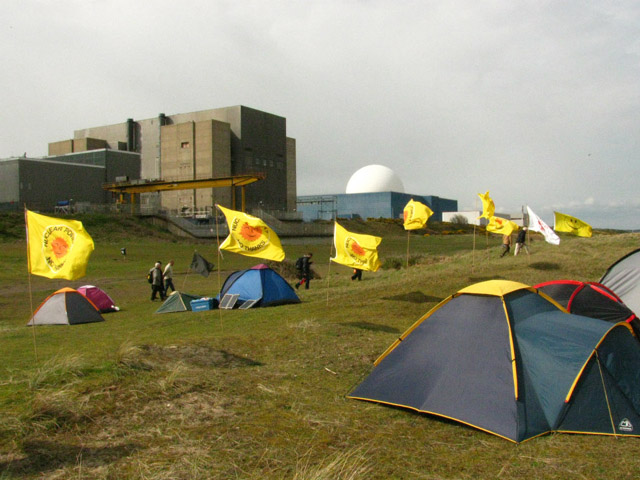 sizewell camp below the powerstation

On Saturday the 21st a demonstration was held at the gates of the power station between 12.00 and 3 .00. Speakers included Peter Lanyon from the ‘shut down Sizewell’ campaign, Ron Bailey, a local town councillor and co-author of the excellent “a corruption of governance?” report about how parliament was mislead over nuclear power, Nikki Clark, a diligent campaigner from south west against nuclear, Chris Walton from the Ringsfield hall trust, a centre for earth education and forest schooling, Lee from Taiwan who spoke of her experiences in post fukushima Japan, and Pete Wilkinson from the Sizewell Stakeholders group.

The demonstration was attended by 80 to 100 people, many of whom came from London on a coach organised by David from London CND. (Thanks for your hard work Dave). Tea and cakes were available and a tasty vegan lunch was cooked up at the camp and dished out at the demonstration. The weather was a little all over the place but a few campers rigged up a makeshift shelter from a parachute and tarps.

The demonstration went well in general except for a couple of sore points. The first was that there was some intrusive in your face filming carried out by EDF security guards while we were setting up. After some discussion we came to a grudging compromise of ‘we won’t film you if you don’t film us.’ The police kept at a distance and did their best to stay out of the way. There were only 2 police officers on the scene during the demo (though how many may have been waiting in the wings is a different issue).

The second point of contention is that someone started loudly and crassly heckling one of the speakers. I am all for free speech, but I was interested in what the speaker was saying, as were a lot of the crowd, and not so interested in the boorish heckler. If the yelling chap had wanted a slot to speak, he could have asked the organisers for five minutes to say his piece. At one point I rather thought that the headline of the local paper was going to be “punch up between protestors at peaceful demo” – not helpful in any way! Fortunately things calmed down.

After the demonstration, peter Lanyon, a knowledgeable local campaigner, took us on a tour round the perimeter of part of the power station. We didn’t make it all the way round this year, but with a bit more planning, for next year we hope to make the walk around the station more of a feature, providing the area of outstanding natural beauty has not been attacked by the bulldozers by then.

The camp went very well overall, due to the hard work and enthusiasm of the people who attended, many of whom were first timers. Approximately 40 people camped over the weekend and more visited during the day. The big bold colourful banners were simply amazing, thanks to Catherine and Jill. The banners were hung on hazel sticks which bent beautifully in the wind. They could be seen from the cliff top car park so no one could be in any doubt of what we were about.

Pete put up his detailed meticulous information boards which get better and better every year. They are erected by the edge of the walkway opposite the camp, and lots of the dog walkers stopped to read them. One of the primary reasons for the camp was to provide a space for people to come and find out about aspects of nuclear power that they may not have considered previously, like the uranium mining and leukaemia clusters for example. The boards were a great way to get the information out there. It may be that I am over optimistic, but this year I believe that the reaction from the local people was a little more friendly , and although they might not want to be seen coming to the demonstration, quite a few people came down to the camp from the nearby town of Leiston, especially to talk to us. We shared knowledge around the camp too, with workshops on basic nuclear physics and insulating your own home.

The wind certainly showed its potential over the weekend by blustering fiercely enough to blow our big marquee into the sea. It took 3 of us to prevent it sailing off into the sunset. Even after we had tethered it strictly to the earth, the wind whipped up enough to lift it and Pete, who was clinging on tenaciously, from the ground. In addition to the wind, we had pea sized hail and buckets of rain but these were interspersed with enough sunshine not to dampen our spirits. The sky gave us a couple of stunning rainbows too.

On Sunday we had our annual Chernobyl remembrance. This year in the form of a picnic with readings from “voices of Chernobyl”. The picnic ended rather abruptly when the marquee began its bid for freedom. We thought it was quite fitting that at the end of a remembrance for one failed construction that our own frail structure began to blow apart.

There were plenty of other activities going on around the camp. Nelly the norty elephant and the silent but deadly radioactive man made an appearance, and lovely food was cooked up by a host of willing helpers hustled into shape by the amazingly organised Niki. The pooh fairy did a great job keeping the toilets piss pristine , and during a ‘ted talks’ session round the fire we learned about DIY solar panels and anarchy, amongst other things. The camp was very family friendly and it was wonderful to watch the children band together and run around in the rain.

This year a few of the organisers had been into Leiston a couple of weeks prior to the camp (Leiston is 2.4km from Sizewell). We leafleted every house, and stood in the town centre talking to people about the issues. It seemed to me that people are no longer taken in by the claims for nuclear as being cheap or clean or a solution to climate change – the main attitude was “we don’t like it but what else is there?” I felt that this was a positive shift in that some people were on the point of being open to the suggestion at least that there may be a better way to go than nuclear. (Small steps!)
After the camp, a couple of dedicated campers continued to smooth community relations by going to the pub opposite the power station where it was rumoured that the landlord was not keen on the protest. Civilities were exchanged, and the landlord even gave an almost cheery “see you next year” when the campers left.

The camp had a lot of support from CANE (communities against nuclear expansion) and ‘shut down Sizewell’. Many of the people in these groups have been battling away for years, first against Sizewell B and then later against the building of Sizewell C. and it was really interesting to make connections with them and hear the history of their opposition. (It was also quite refreshing, as organisers in our 30’s and 40’s, to be considered as ‘the youngsters!’)

Another shift in attitude came from the council, EDF and the police. This year (to the annoyance of some residents), we had the quiet permission of the council to go ahead with the camp. The police invited us to meet with EDF, Suffolk coastal district council, and the most vociferous angry resident, in the cafe on the beach. The police paid for the tea. Mr security from Sizewell B was polite and offered to facilitate our protest, and to be on hand with water and medical aid should the need arise. (As it was we got plenty of water from the sky). We were not sure entirely how to react to these overtures – it felt a little like dancing with wolves, but we thought we would suck it and see this year, reserving the right to spit it out if we didn’t like the taste.

All in all, it was a wonderfully exhausting weekend. And we all came away with plans of how to improve it next year.