Occupy Newcastle strike out at ATOS 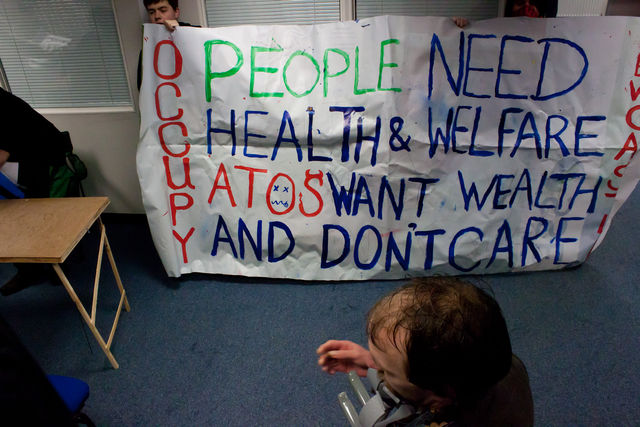 
ATOS are a private IT company who have been controversially hired to handle disability benefit reviews, tasked with cutting support to as many people as possible.

They performed street theatre inside the waiting area, at Regent Centre Newcastle, to an audience of claimants in order to highlight the unfair and profit orientated nature of the assessments.

“The protest highlighted the demoralising and dehumanising process which the ATOS assessment puts people through. In effect the most disadvantaged in society are attacked and alienated because of policies which allow for profit making companies to take control of ordinary people’s lives. Within the performance Jim’s metaphorical suicide is a true reflection of reality.”

Between January 2011 and August 2012, 1,100 claimants have died after being found fit for a work-related activity by ATOS. (THIS WILL NEED TO BE CHECKED)

Someone who is going through the ATOS process stated:

“The whole purpose of ATOS is to get people off benefits, as part of the government’s austerity programme. It’s not to assess their fitness for work.”

60% of claimants who are rejected by the ATOS assessment and take their case to a tribunal have the unfair decision overturned. This figure is higher for those who have legal representation.

ATOS security and staff were quick to show their complete contempt for people out of work with the management telling activists to ‘stop being lazy and get a job’. They attempted to stop the protest from being filmed, confiscated the table being used as a prop (injuring someone in the process) and called the police. Despite these attacks the demonstration was successful, video footage will follow as will more actions like this…

Video will be posted soon