About a dozen members of West Midlands No Borders were met with enthusiasm and interest today, as they staged an info picket outside of the Birmingham City Council house. Their presence confronted the racist violence of soon-to-be-Mayor, Councillor John Lines, and the benefactors of Lines’ privatisation of Asylum Seeker housing, global security company G4S.

Large banners spanning the entrance of the Council House that read: “No To Racist Scumbag Mayor Lines” and “G4S will screw you 2” were the backdrop as passers-by stopped, despite the cold rain, to express their support.

“I wish I had a picture of this” said one passerby, “he really is a racist!” 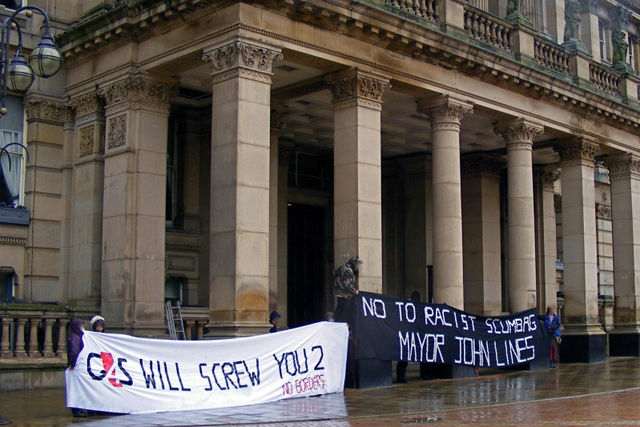 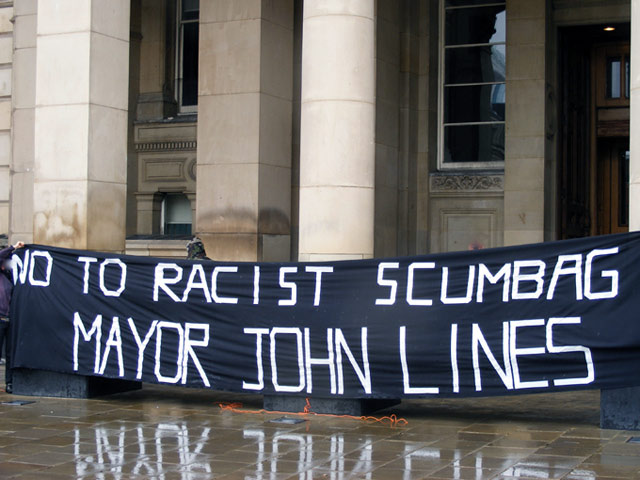 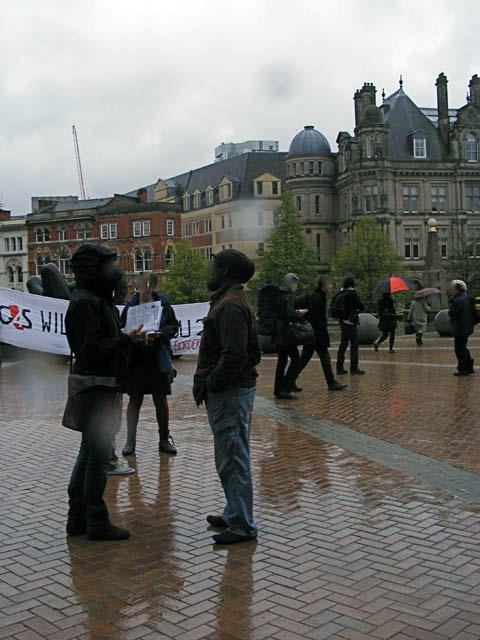 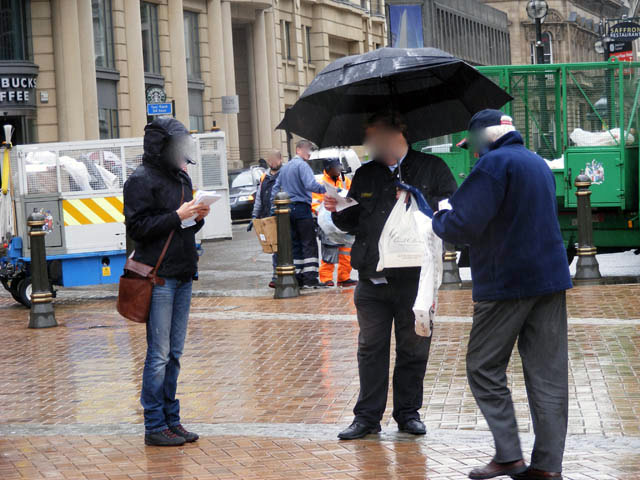 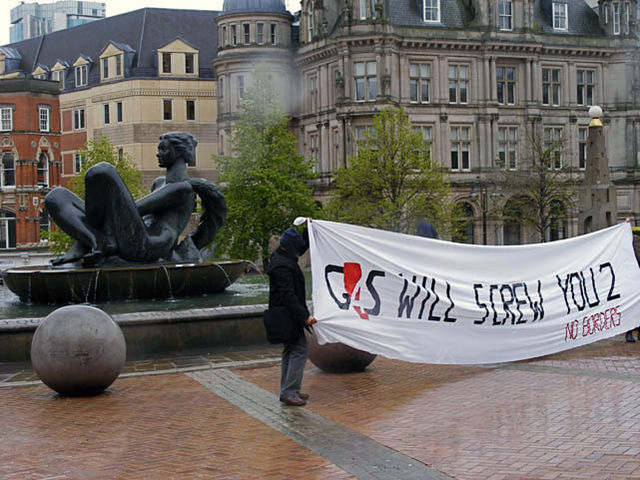 G4S Will Screw You Too

No Borders activists handed out 400 fliers over lunchtime as people expressed disgust about everything from Lines' violent, self-serving approach to community and council over the last 30 years, to G4S’s devastating human rights record, including the poor treatment of prisoners at HMP Birmingham Prison in Winson Green, recounted by one supporter. And those who've worked for G4S know that this company (which earns big money from the misery of people who cannot fight back) does not share its huge profits. G4S pays poor wages, and cuts jobs, wherever possible.

As the First Citizen of Birmingham, the Lord Mayor is supposed to represent not only the City but also the people of Birmingham. Yet Lines is entirely unfit to perform such a function. He has repeatedly revealed himself to be a foul-mouthed bullying racist, whose attitudes and behaviour are entirely out of step with the values of a cosmopolitan 21st century city like Birmingham. Lines has been twice convicted for acts of violence. Celebrating in a pub after winning an election he was irate when staff wouldn't serve him after hours and waited for the barman to came out, punching him in the face three times. Prior to that, he was convicted for beating his neighbour's son-in-law with a plank of wood and throttling him.

G4S, who is already involved in most aspects of vulnerable people’s lives, from managing workfare to detaining and deporting migrants, recently took over the contract to house new migrants awaiting decisions on their status. This lucrative contract had been held by Birmingham City Council, until Cllr Lines decided to privatise it, falsely blaming migrants for the housing crisis, and calling asylum seekers “scumbags” who are “not [his] people”.

His scapegoating of migrants shows not only a disregard for the struggles many newcomers to Birmingham face, but also a complete ignorance of policies and strict regulations put on migrants applying for refugee status. The reality is that not all who are seeking asylum have access to any public support. Those who do meet the narrow criteria have no choice about their housing; generally being moved around the country into places in such poor condition that they are otherwise vacant. Though Lines blames them for not working, the Home Office prohibits those seeking asylum from holding jobs. This creates an insecure, desolate life that no one would envy. The luckiest will receive up to £7 a day on a smart-card that only works in major retailers to buy food and clothing (not even bus fares) and is heavily monitored.

G4S is also likely to bid on the privatised policing contract in the West Midlands which, if awarded will mean that the largest global security corporation, one who has been responsible for many deaths in custody and who provides prisons and security for violent corporations and regimes world-wide is in control of housing, policing, prisons and deportations in the West Midlands. Their track record includes many violent assaults in immigration custody, leaving at least two people in wheelchairs, and the death of Jimmy Mubenga who was killed while being deported in the custody of G4S.

"Migrants coming to Birmingham to escape persecution, possibly perpetrated by the actions of firms such as G4S, are not criminals, their homes are not prisons. They are the people of Birmingham. Our people." says Marilyn Ervin, who was part of today's action. "They do not deserve to live under a continued threat of violence and abuse, either from their landlords/jailors, or from the Lord Mayor. G4S have repeatedly proven themselves unfit to take responsibility for people’s welfare, and John Lines has repeatedly proven himself to be a lying, scapegoating racist"

The citizens of Birmingham need to make it plain that we too, are not “his people”; that we have no wish to be represented either nationally or  internationally by a violent, self-serving ignoramus as mayor, and no wish to be controlled by a violent, profiteering multinational corporation that will screw us all.

For more information or to get inolved please contact: West Midlands No Borders