Barclays: Divest from Israel and the Arms Trade - picket of Barclays 27/4/12

Over twenty people turned out to picket Barclays – calling for the bank to divest from Israel and the arms trade and to cease providing financial services to ITT Exelis. We were joined by activists from the World Development Movement protesting against Barclays speculation on food prices. 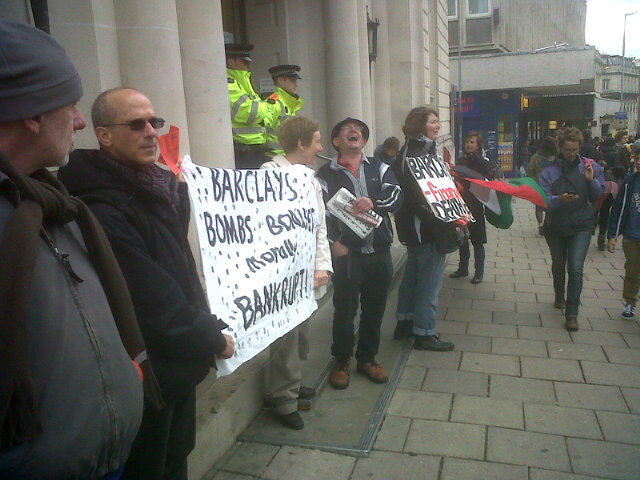 This was be the 4th boycott action that has been called jointly by Jordan Valley Solidarity, B&H Palestine Solidarity Campaign, Smash EDO, and Sussex & Brighton Uni students. We’ve effectivley closed the branch down every time.

Why Barclays? well it

has a along history of profiting from suffering and war – most people will be aware of their involvement in apartheid South Africa in the 70′s and 80′s.

is the only major British high street bank with significant investments in Israel, holding shares in 8 Israeli companies and a number of companies linked to Israel’s illegal settlements.

is the largest global investor in the arms trade and holds shares in several companies supplying arms to Israel.