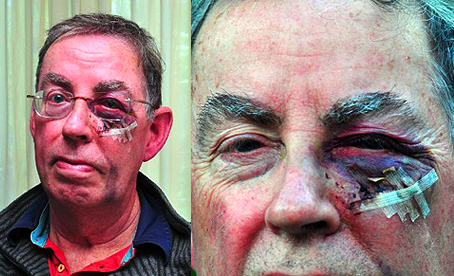 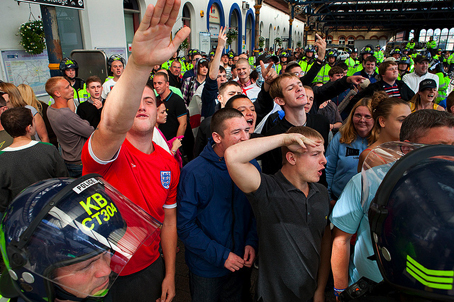 Far-right hand-signals at the March For England 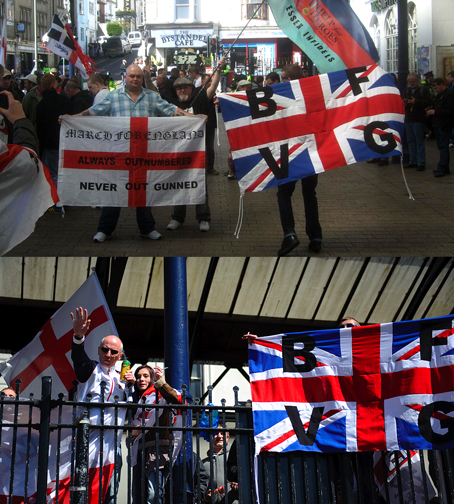 Far-right hand-signals at the March For England (bottom left) 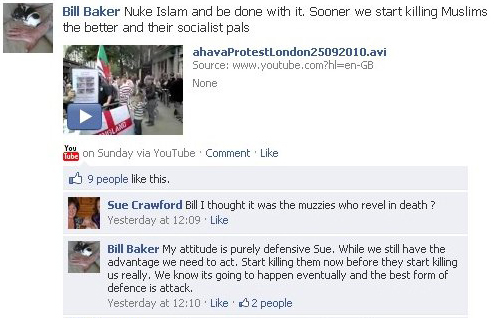 "Two pensioners handing out anti-fascist leaflets were set upon by extreme right-wing thugs in a shocking high street attack. Activist Andrew Smith, age 69, was helping man the regular Socialist Worker stall in Lewisham High Street on Saturday at around noon when he was head butted in the face, while his colleague, age 67, was punched to the floor. Mr Smith, a long-standing anti-fascism campaigner and retired teacher, needed laser surgery for a torn retina after the unprovoked assault... He told News Shopper that before the attack, the gang made reference to Brighton, where anti-fascists faced-off with the March for England right-wing group earlier this month. Mr Smith said: "They were shouting something about Brighton and accused us of attacking women and children"."

Despite the lack of ANY hard evidence (evidence like photos of the alleged victims' or their alleged injuries for instance), the EDL, NF and BNP etc have been touting round a story that, after they took women and children to the far-right March For England demo in Brighton, and after the EDL threw missiles at the counter-protestors, counter-protestors who fought back were (according to the EDL version of events) "attacking women and children". The EDL havn't shown any proof of their claims, but, always keen to believe their own bullshit, the brave warriors of British nationalism took revenge by beating-up 2 left-wing pensioners in Lewisham! Even worse, and to put this in even clearer perspective, in 2010 BNP Essex activist and March For England founder Bill Baker posted on Facebook saying the "sooner we start KILLING Muslims the better & THEIR SOCIALIST PALS", and in 2011 Anders Breivik murdered 8 adults and 69 children.

Whatever you might think of the SWP, practical suggestions for people setting-up political stalls etc are -

1/ Always set-up your stall in clear sight of CCTV (if you don't want to be seen by CCTV at all, it's probably best not to do street stalls in the first place)

2/ Always have one or more friends on hand with VISIBLE mobile phone cameras, camcorders, Flip-cams or similar, preferably recording all the time, at the very least ready to film at a moment's notice - very few Fascists will find the courage to attack if they know their face is going to be filmed