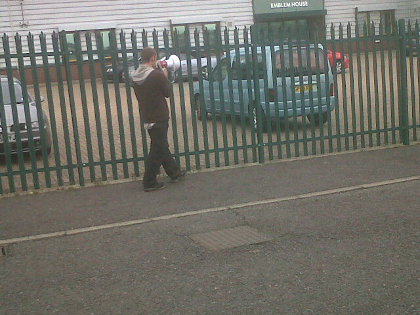 Another day, another demo. Smash EDO held a noisy demonstration outside the gates of EDO MBM as the workers were going home for the bank holiday weekend. The police seem to have given up on policing these impromptu demos for now.

http://smashedo.org.uk/events/event/bikes-not-bombs-critical-mass-to-edo), a picket of Barclays on Saturday 12th (

http://smashedo.org.uk/events/event/target-barclays-2) and more - wait and see

Keep it up. They are not wanted here in our diverse and tolerant city. I heard they are involved in the manufacture of cluster bomb products. Is this true?