In response to a call for solidarity from egypt with the 600 + detainees and the 20 + killed by SCAF (military) in the latest round of repression in Cairo, activists dropped a banner on the 6th of May 2012 outside the Egyptian Embassy in London. The banner reads: Free the Prisoners, Down with the military rule. 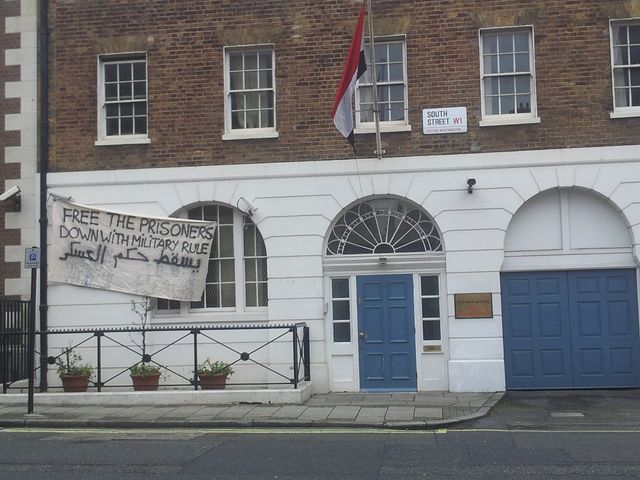 Activists unfurled a banner saying “Free the prisoners - Down with military rule!” outside the

Egyptian Embassy in London earlier today (Sunday). The banner drop was in solidarity with

the Ministry of Defence, protesting against military rule. Over the past five days 20-30

activists have been reported dead as the military have used live ammunition, birdshots,

In total, around 400 people were arrested on Friday night as the military accelerated their

where protesters were being held by the military. The army indiscriminately opened fire on

journalists, lawyers, youths and families of the detained and another 50 or so people were

arrested with another 100 injuries. In total, approximately 20 journalists have been detained,

with tens more assaulted and injured.

Many students and leaders of the student movement are currently in military custody. On

days pending investigation – most of which are likely to face military trials.

Ragia Omran, lead lawyer at the Front to Defend Egypt’s Protesters, was quoted as

saying: “This is the worst military assault on protesters since the fall of Mubarak, in terms of

force used and numbers arrested. Military has now set a curfew from 11pm to 7am.”

the Middle-East, we call for the following:

An end to military trials for civilians

follow the link below fpr video of the banner drop