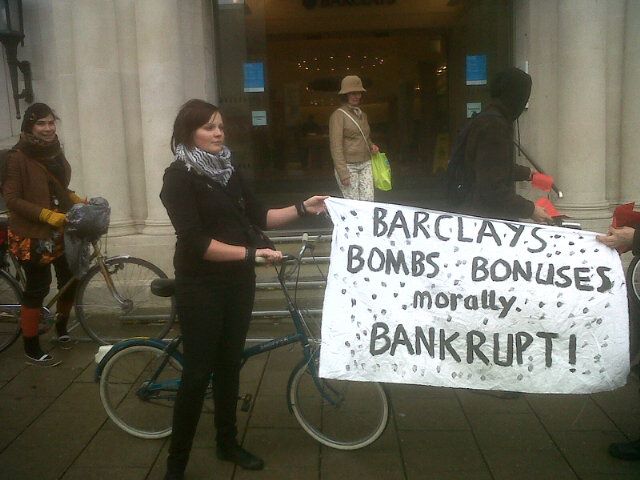 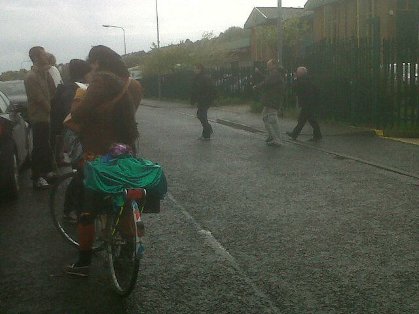 And at the factory 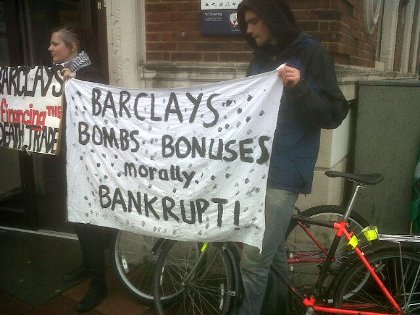 Anti-arms trade campaigners braved heavy rain today for a critical mass against arms dealers EDO MBM. Cyclists gathered on the Level, watched over by a group of motorcycle police. The critical mass kicked off at 3.30pm and initially gave its escort the slip. A sound system and Smash EDO flags made the mass highly visible as it headed to the seafront and up North Street.

Activists pulled up outside the North Street branch of Barclays Bank, unfurled banners and held a picket calling for Barclays to divest from the arms trade and stop providing services to ITT Exelis, EDO MBM's parent company.

The mass carried along to the clocktower, along Queen's Road and on to Preston Circus where we held another impromptu picket of the Preston Circus branch of Barclays. There was a great response from the public, who were unsurprised to hear about the bank's dealings with the arms trade. People really do seem to hate the banks and are looking for an alternative to putting their money in the hands of a company that invests in the arms trade.

Cyclists headed up the Lewes Road to the EDO MBM factory where we were met by a group of less mobile activists. Megaphones and another sound system were produced as we greeted the workers leaving the factory.

There was talk of a Smash EDO critical mass for ages, glad it happened and went so well.

Check out the Bicycology website, blog and film - we're on tour now: