Judith Sambrook is back in court Thursday 17 May: Shrewsbury Magistrates, 10am. Solidarity vigil outside the court from 9.30am.

Deborah Glass Woodin appeared in Reading Magistrates court at the beginning of the week, was found guilty and fined. Barbara Dowling appeared at Glasgow Sheriff's court and her trial has now been adjourned until 25 September. 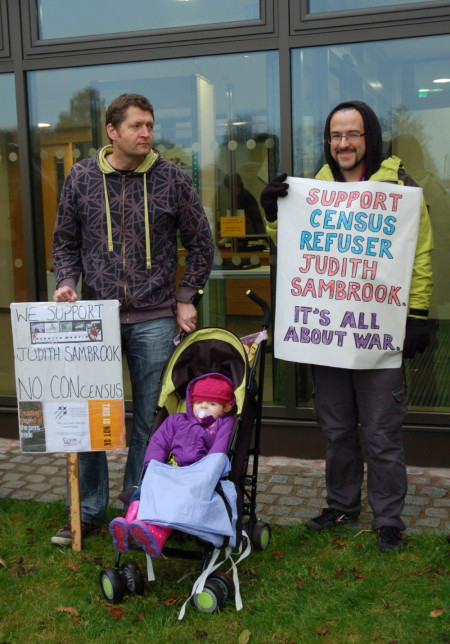 For previous reports on some of these cases, see the indymedia census refuser topic:

(Bristol)
Case dropped by CPS on grounds of insufficient evidence likely to secure conviction.
Press release from John issued on 14 May 2012:

(Wrexham, then Bristol, who sent case back to Wrexham)
Case dropped by CPS one day before John was due to appear in Wrexham
Magistrates court on Friday 11 May.

(Reading)
Trial was held on Monday 14 May, Reading Magistrates Court.
"Deborah was found guilty albeit by an apparently sympathetic judge. Fined £150, plus £150 costs, plus £15 'victim surcharge' (what victim??!). She is now considering whether or not to pay."

(Wrexham, then Shrewsbury)
Case dropped by CPS but revived by Judith.
Court date: Thursday 17 May, 10am, Shrewsbury Magistrates Court.
Crown is likely to present no evidence against Judith.

*There is some query over the above two dates - awaiting update*

(Birmingham)
Roger is refusing to pay the fine imposed by the courts and is expecting Bailiffs.

(Areas in brackets indicate court locations. In most instances, people live far from these locations)