The Crown's case against Judith Sambrook for refusing to complete the 2011 Census was formally dismissed at Shrewsbury Magistrates Court this morning. The CPS offered no evidence against Judith and she was therefore found not guilty. This is the first not guilty verdict we're aware of in relation to 2011 Census refusers. Two cases have been very recently dropped (discontinued) by the CPS, but others are continuing and only this week Deborah Glass Woodin of Oxford was found guilty of the same offence at Reading Magistrates Court. 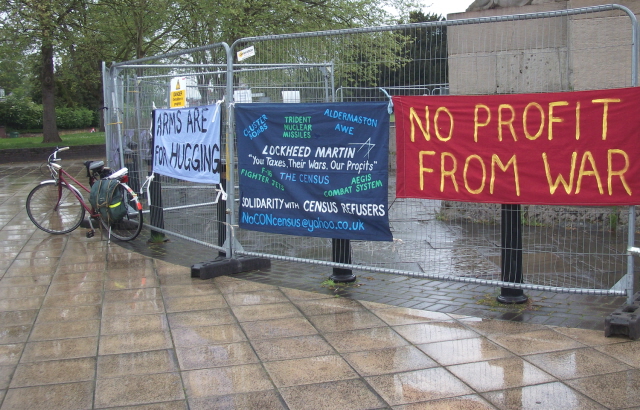 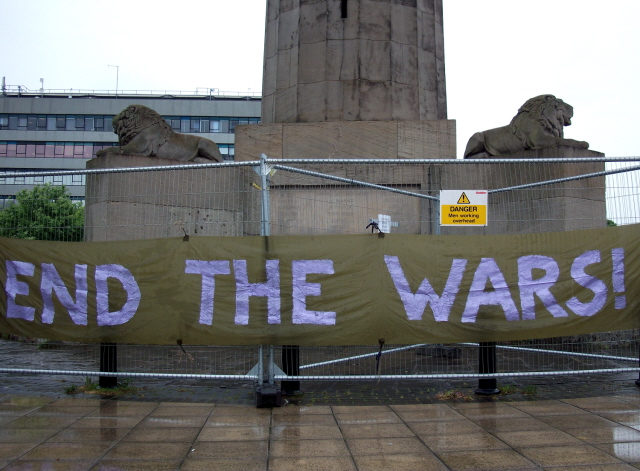 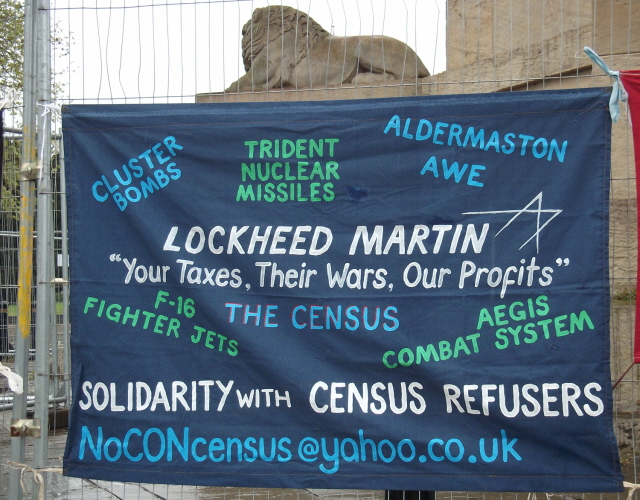 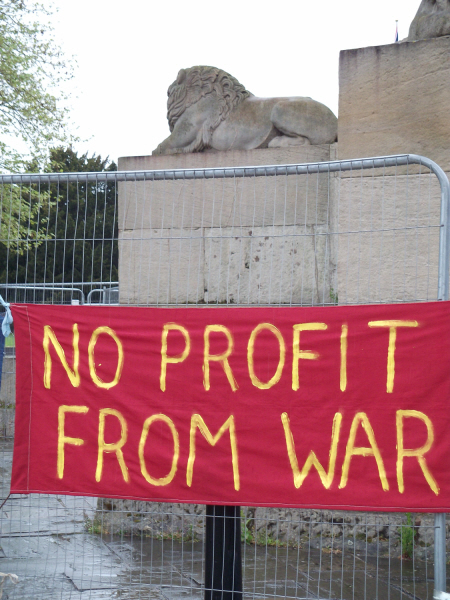 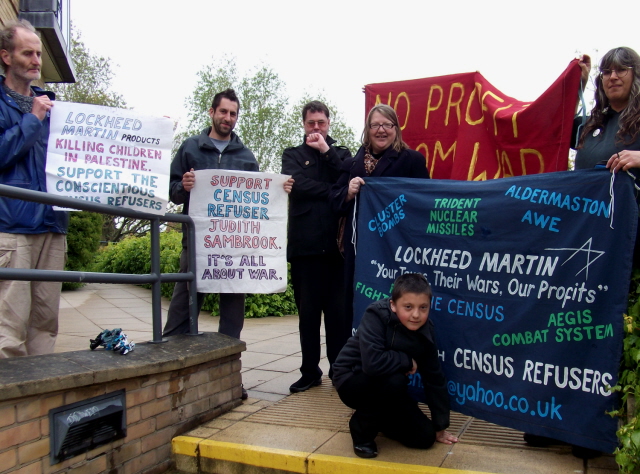 TODAY INSIDE AND OUTSIDE COURT

The day started at 8.45 am with a vigil for Judith and display of anti-war banners around the foot of (British army Commander-in-Chief, MP and foxhunter) Lord Hill's column a few yards from the court, prompting lots of waves and beeps and causing one passing motorist to leap out of his car shouting “An anti-war demo! In Shrewsbury!”

Around 9.40 Judith, a handful of supporters and a photographer from the local press arrived at the court. After a conference with the solicitor sent by Bindmans to represent Judith, the hearing itself was over in a matter of minutes and the case dismissed when Andrew Warman of the CPS announced that he was not presenting any evidence against her. Judith was granted permission to apply for her out of pocket expenses from central funds.

Her efforts to question the CPS decision not to pursue the case, especially given the other ongoing cases around the country, were rather curtly dealt with by District Judge Nigel Cadbury, who said:

“I can't force them to continue with the prosecution. If you're not guilty, you're not guilty” and then “They've reconsidered the matter and decided not to proceed. I can't force them to give you details. If you want further explanation then you can take it up with them.” He then said something I didn't get down verbatim along the lines that Judith would probably only get a one line answer from the CPS. The CPS is obstructive enough already - encouragement from the judge is uncalled for.

In Scotland, another dodgy company, CACI, got the Census contract, leading to refusals there.

A very small percentage of those people who refused to complete their Census forms in England and Wales have been prosecuted.


FAIR, FEARLESS, EFFECTIVE – THE FANTASY WORLD OF THE CPS

The CPS has been less than forthcoming about the detail of its reasons for dropping cases, which makes its decision to continue with other cases look pretty shabby and unfair.

John Marjoram's case was dropped because the CPS suddenly decided there was “not enough evidence to provide a realistic prospect of conviction”. Since there was the same amount of evidence as when it confidently brought the prosecution against John earlier in the year, there are questions to be answered over why the case was brought in the first place and why court time and public money (as well as John's time and money) were wasted on a case that was to be dropped on a CPS whim. John Marjoram's press release:

John Voysey's case, which was briefly linked with John Marjoram's (to be dealt with jointly) before Bristol Magistrates apparently objected and sent it back to Wrexham, was dropped at the request of John V's solicitors after John M's case was discontinued.

Judith's case, meanwhile, was dropped because it was “not in the public interest to proceed” according to the CPS. At first, it flatly refused to say why it considered it was no longer in the public interest to pursue the case . Eventually, and only when pressed, it ventured that the decision was based on Judith's health. Despite being informed that Judith was fit to stand trial and the discontinued case being 'revived' by Judith who attended court today, Andrew Warman for the CPS offered no evidence against her. The CPS hadn't mentioned any evidential reason for dropping the case, so it's unclear where the evidence against Judith had gone, nor whether the evidence against other census refusers is also going to vanish in a puff of publicly funded smoke.

None of this lives up to the slogan CPS uses on its website: 'fair, fearless, effective'. 'Unfair, fickle, feckless' might be nearer the mark.

There are also questions to be asked about legal aid decisions in census refuser cases, in particular why some defendants have passed the public interest test for legal aid while at least one has been repeatedly refused.

Well done Judith !
The CPS are mad. They should of heeded the old saying "Let sleeping dogs lie !"