G4S profiting from abuse the world over... 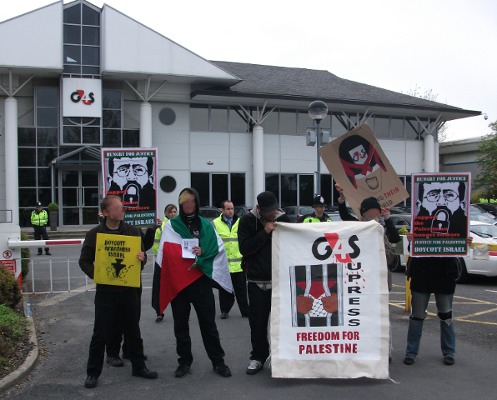 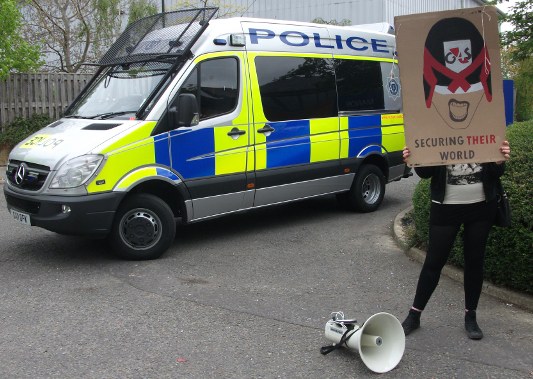 A demonstration was held outside of G4S' headquarters in Crawley today to send a message via megaphones to the private security company profiting from providing services to Israel's prisons, police stations and businesses in Israel's illegal settlements.

Today's demo was in support of the victorious Palestinian Hunger Strikers and in solidarity with all the people still incarcerated and persecuted under the Israeli apartheid regime. People held banners and read out messages of solidarity for those that had been on hunger strike.

Despite G4S being the largest security company in the world, their private security guards were supported by a few vans of police preventing access to the site. The protest managed to continue around the inside of the compound to the companies office in full view of the workers and leaflets were handed out to passers-by.

The illegal occupation of Palestine continues and with it the indiscriminate arrests of Palestinian women, men and children. Many are held in administrative detention without charge, with military courts judging those who are 'lucky enough' to receive a trial. Widespread reports of systematic violence and torture by guards is common place.

This action is in response to a call from the Popular Struggle Coordination Committee and the Boycott National Committee for actions 'emphasizing imprisonment as a critical component of Israel’s system of occupation, colonialism and apartheid practised against the Palestinian people"

"Palestinian civil society and human rights organizations have called for intensifying the global Boycott, Divestment and Sanctions (BDS) campaign to target corporations profiting directly from the Israeli prison system. In particular, we call for action to be taken to hold to account G4S, the world’s largest international security corporation, which helps to maintain and profit from Israel’s prison system, for its complicity with Israeli violations of international law." -

Today people made their demand to G4S known, 'support the international boycott and pull out of contracts with Israel'.

And the campaign against G4S does not stop here. G4S is also profiting from the asylum and detention system in the UK, from child detention, from privatisation of public services and from privatising security the world over from prisons, detention centres, military bases, oil, gas, nuclear and mining projects down to local policing, security guards, body guards, and armed response teams in every continent with long list of wide-spread abuses against people everywhere.