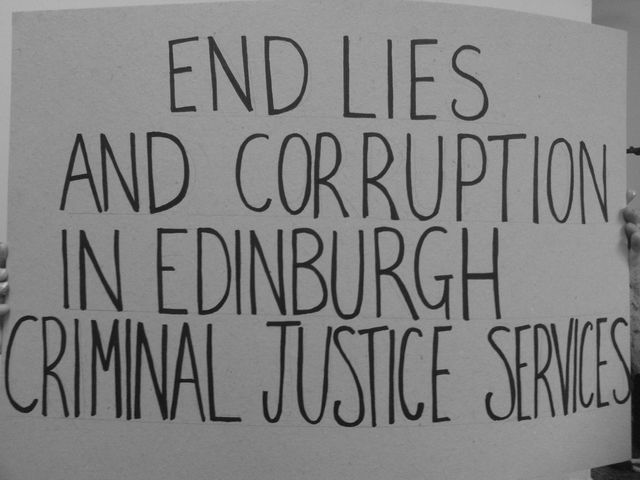 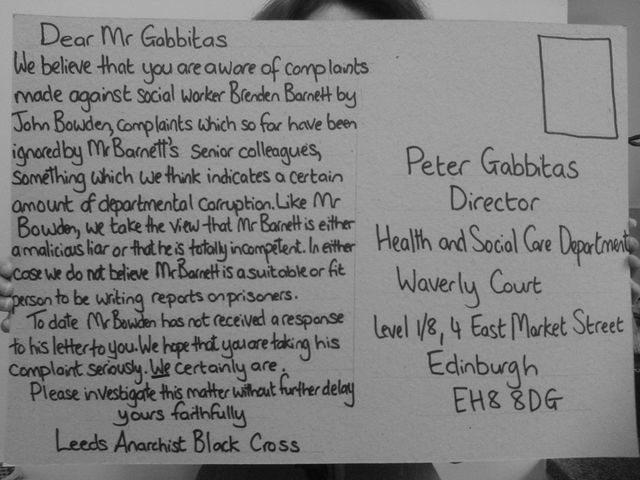 Long-term prison militant John Bowden is certainly no stranger to harassment and injustice within prison, nor is he unfamiliar with social workers making up lies. The latest episode in John’s 32 year-long battle for freedom however, certainly has something of the Kafkaesque about it. Basically an idiot social worker called Brendan Barnett prepared a report for the Parole Board containing the sort of lies which would put shame to a naughty three year-old – the full story is at

http://leedsabc.org/corrupt-social-workers-attempt-to-rid-themselves-of-prisoner-john-bowden/ All the indications are however that Barnett is not simply a silly little boy, he is rather a malicious liar abusing his position of power over a long-term prisoner. Unfortunately, when John Bowden made an official complaint, Barnett’s colleagues closed ranks, and are currently attempting to have John banished from Scotland, so letting Barnett (and themselves) off the hook. This corruption apparently goes right to the top, as John explains in his most recent article on the sordid affair:

“I have now complained to Peter Gabbitas, Director of Health and Social Care Department in Edinburgh, who has overall responsibility for Barnett and his colleagues, and he has yet to even acknowledge my letter, which suggests a disinclination on his part to recognise either my existence or that of my complaint. Incredibly, it would seem that a pathological liar like Barnett has the absolute freedom to describe someone in an official report as a “racist and homophobic” serial killer without a shred of evidence, and absolutely no one in his entire department has the integrity or moral courage to criticise or expose him, and that apparently includes even the department’s Director. The complete absence of any basic integrity among those at Edinburgh Criminal Justice Services is both scandalous and deeply worrying for those under its supervision.”

Since Mr Gabbitas seems to have overlooked John Bowden’s letter to him, we thought we’d send him a reminder in the form of an A2 postcard, which reads as follows:

We believe that you are aware of complaints made against social worker Brendan Barnett by John Bowden, complaints which so far have been ignored by Mr Barnett’s senior colleagues, something which we think indicates a certain amount of departmental corruption. Like Mr Bowden, we take the view that Mr Barnett is either a malicious liar or that he is totally incompetent. In either case we do not believe Mr Barnett is a suitable or fit person to be writing reports on prisoners.
To date, Mr Bowden has not received a response to his letter to you. We hope that you are taking his complaint seriously. WE certainly are.


You can also write in support of John Bowden to one or more of the following (as well as to Brendan Barnett at the same address – and phone number - as Michelle Miller):


Letters of support to John Bowden should be sent to: