Faslane 30 Days Of Action: Update And Final Call Out

Dear fellow anti-nuclearist/ peaceist/ anti-militarist/ anarchist/
willing-to-stand-up-and-be-counted-ist, You are being invited to the 30th Anniversary of resistance at Faslane! 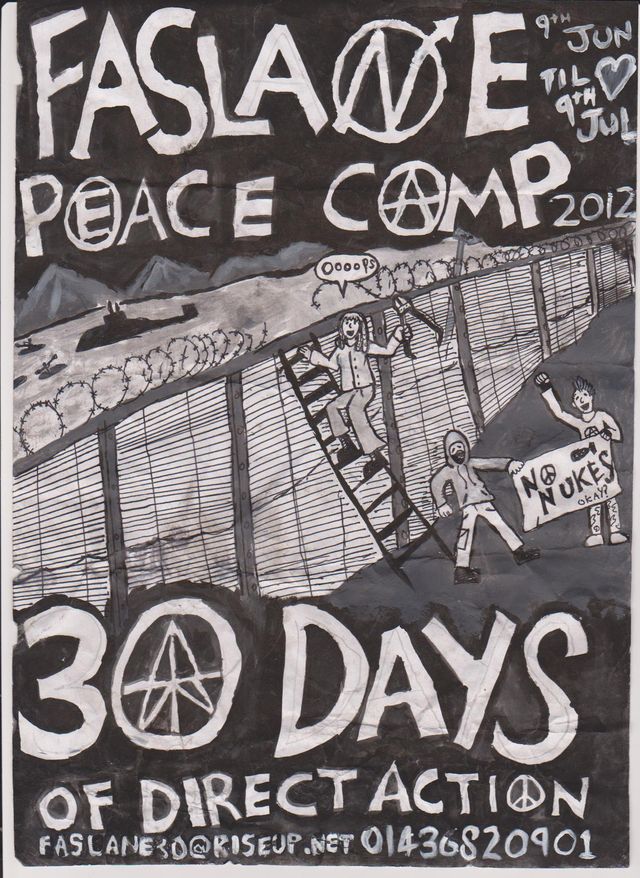 As of June 12th this year, the Peace Camp will have been in existence for 30
years. Whilst it is great that there has been such dedication from thousands over the years, the radioactive beast still hasn't been chased from it's lair! A 30 Day campaign of anti-nuclear insubordination, from June 9th to July 9th, has thus been planned.

You can find details of some of the public events listed chronologically below, but for the most part, there will be artful insurgency throughout of a nature we would prefer not to disclose to “the powers that be”...Energies and custodial time willing, we hope to take non-violent direct action at least once a day! And not just at Faslane, oh no!

So do come along whenever you can and you will find actions waiting to happen via autonomous, inclusive, consensus based planning and participation. Everyone is welcome (except for undercover police officers... We have trained a dog to sniff you out. You have been warned.) Fun, frolics, vegan feasts and brushes with the law are all guaranteed!

With a vote on Scottish Independence and Trident replacement in waiting this is the time for a renewed campaign of resistance!

There are scenic camping spots and vegan food will be provided for all meals (donations for which will be gratefully received from those who can afford it). Caravans will be allocated on a needs basis first so do let us know in advance. We can answer questions and queries by email or phone us on 01436 820901 or 07511793227
Please proliferate this in any way that you can.

We love you and need your help to be very naughty throughout our 30 Day campaign,
Faslane Peace Camp

P.S. THIS IS NOT A PARTY. The sole intention of this campaign is to resurrect an anti nuclear campaign at Faslane that has long been waning at a time when it is most essential in connection to the Scottish Independence debate, Trident replacement and a potential for actual nuclear decommissioning in the UK. Repeat, THIS IS NOT A PARTY. Do come if you wish to be part of a big team of loveliness, direct action and action support. Do not come if you want a party.

EVENTS THAT WE CAN ANNOUNCE:

PEACE PICNIC JUNE 17TH: Helensburgh CND would like to invite all local groups to a peace picnic at Faslane North Gate on Sunday June 17th from noon to 4pm. Jeely Peace cafe from Stirling CND will provide catering. Please bring banners, musical instruments and your friends. The Peace Camp will be pleased to welcome you before or after the picnic, or any time, ever.

PEACE MARCH FROM GLASGOW TO FASLANE 21ST-23RD JUNE: A group of
enthusiastic walkers and concerned citizens will meet at George Square, Glasgow at midday on Thurs 21 June to walk to Faslane in the name of peace and no nukes! They will be stopping to camp en route overnight. The pace will be relaxed. Everyone is welcome, bring banners and practical shoes!

RISE UP SINGING 1ST AND 2ND JULY: *Come and sing Trident out of Faslane and out of Scotland! *To re-invigorate the diverse creativity of Faslane 365 and to keep the issue of nuclear weapons firmly in the public eye and on the political agenda, Rise Up Singing (a Trident Ploughshares affinity group) has organised a two-day gathering to celebrate the 30th birthday of Faslane Peace Camp. Everyone welcome! No singing experience necessary. Bring a song to share, a banner and some cake, and we'll provide the tea.

ACADEMIC SEMINAR ROADBLOCK 6TH JULY:
On Friday July 6th academics and activists from all over the world will participate in a seminar blockade as part of Faslane 30. The trans-disciplinary seminar blockade follows similar actions at Faslane in 2005 and at COP15 in Copenhagen in 2009 and is part of an emerging tradition of putting social theory into personal practice. The theme of
the seminar is ‘security’ and participants are invited to reflect on the complex issue of nuclear weapons from a range of perspectives -governance, securitisation and discourses of ‘terror’, ethics, as well environmental and social justice. Leaving morality aside for just one moment, we ask how is spending on nuclear weapons justified strategically, economically and socially in an era when the nature of conflict is so
changed, when much of the world is in economic meltdown and so many people are suffering from policies of austerity? The seminar blockade will be peaceful but will insist on claiming the public space for democratic debate on what security means both geopolitically and in people’s everyday lives. Contributions will engage with broader themes of politics, democracy, governmentality, conflict resolution, citizenship, global
relations and anti-war. The seminar will involve creative public and participatory scholarship, using a variety of media and forms: paper presentations are envisaged - though PowerPoint is logistically unfeasible! - alongside workshops for small group debate, experience sharing and other kinds of learning. In particular, we hope that peace
campaigners at the camp will be centrally involved in the seminar. The timing and exact locations of seminar events will necessarily be determined on the day, but participants are invited to gather at the Peace Camp between 8 and 9.30 am.

CIRCA 7TH JULY:
The Clandestine Insurgent Rebel Clown Army (CIRCA) will NOT be marching on
Faslane nuclear submarine lair on Saturday 7th of July, oh no. Even though the Trident missiles at Faslane Naval Base could kill all the Clowns on the planet –and all the clowns too! – we won’t be there. Even though the Trident missiles at Faslane are going to be replaced at an astronomic cost when all Clowns are feeling the pinch, we will not be roused to action. Even though none of our Clown comrades and friends in Scotland want Trident or its replacement, CIRCA aren’t for turning (up). Most of all, even though Rebel Clowns would defend everyone for just the price of a rubber dingy and load of custard pies, even though Trident replacement will take our Army jobs away, we will NOT be part of Faslane 30. Academics say that CIRCA has died a death in Britain, and they are right. They must be right because they are academics and academics know everything about elites, exploitation, militarisation… (Funny how nothing changes, then,
eh?) However. A new Army of Rebel Clowns from all over Britain is trained and ready to join our international comrades and peace camp friends to PARTY on the 30th anniversary of resisting nuclear nonsense at Faslane. If Trident makes us redundant and academics pronounce us dead, we will come to the party as the unemployable undead, as gummy vampires, vegan zombies and mangy werewolves. CIRCA will NOT be marching on Faslane, but a ghost army of Rebels Clowns – seasoned corpses and the freshly (sic) deceased (diseased?) might, just might, be there! Come on, do the
Resurrection-Insurrection Shuffle!


... And the rest is top secret, but do come along and be included! Partcipating groups include Peace Campers past and present, local CND groups, Trident Ploughshares Affinity groups and Trident Ploughshares Scotland. We also anticipate a large number of people who are not affiliated with any particular anti-nuclear groups so don't be put off if you're freelance!