Brendan Barnett may soon be looking for another job. 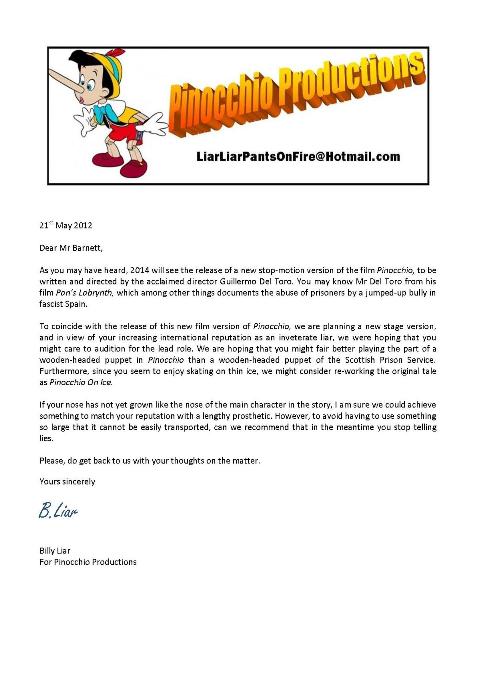 http://www.indymedia.org.uk/en/201205/496231.html) that Leeds ABC understands he has been invited to audition for the lead role in a prospective new stage version of ‘Pinocchio’. Mr Barnett has risen to prominence in recent months by telling lies of Titanic proportions about long-term prisoner John Bowden. A letter from Pinocchio Productions to the “Wooden-headed puppet of the Scottish Prison Service” reads as follows:

As you may have heard, 2014 will see the release of a new stop-motion version of the film ‘Pinocchio’, to be written and directed by the acclaimed director Guillermo Del Toro. You may know Mr Del Toro from his film ‘Pan’s Labrynth’, which among other things documents the abuse of prisoners by a jumped-up bully in fascist Spain.

To coincide with the release of this new film version of ‘Pinocchio’, we are planning a new stage version, and in view of your increasing international reputation as an inveterate liar, we were hoping that you might care to audition for the lead role. We are hoping that you might fair better playing the part of a wooden-headed puppet in ‘Pinocchio’ than a wooden-headed puppet of the Scottish Prison Service. Furthermore, since you seem to enjoy skating on thin ice, we might consider re-working the original tale as ‘Pinocchio On Ice’.

If your nose has not yet grown like the nose of the main character in the story, I am sure we could achieve something to match your reputation with a lengthy prosthetic. However, to avoid having to use something so large that it cannot be easily transported, can we recommend that in the meantime you stop telling lies.


Leeds ABC would like to wish Pinocchio Productions well in securing Mr Barnett’s services; he can hopefully do less harm in the theatre than he has as a prison social-worker, a position from which we sincerely hope he will soon be sacked.