Brendan Barnett judged to be too big a liar even for ‘Pinocchio’. 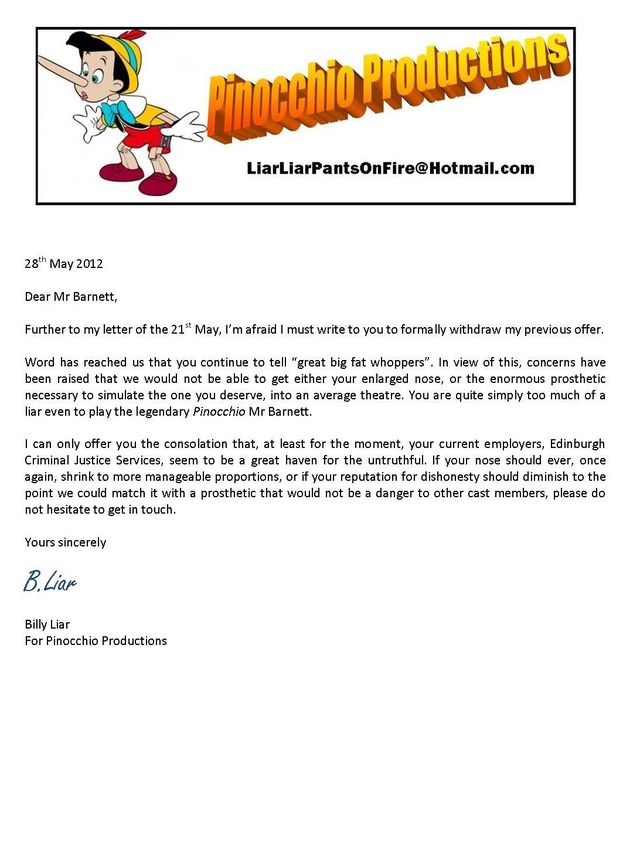 When lying prison social worker Brendan Barnett’s bosses eventually baulk at covering up for him, and the Scottish Prison Service throw him to the wolves as they did with their previous stooge Matt Stillman, he may find he has serious career problems. However, as Leeds ABC recently reported (see

http://leedsabc.org/lying-prison-social-worker-invited-to-audition-for-pinocchio/) the man whose lies have made Edinburgh ‘Criminal Justice Services’ a laughing stock, was recently offered alternative work. ‘Pinocchio Productions’ hoped to use Barnett’s growing reputation as a world-class liar to enhance their planned stage version of ‘Pinocchio’, with the Edinburgh social worker being offered the lead role as the wooden-headed puppet whose nose grows when he lies.

Having hoped this career opportunity might at least prevent Brendan Barnett from causing more damage as a wooden-headed puppet of the Scottish Prison Service, we were therefore disappointed to hear the news that ‘Pinocchio Productions’ are no longer interested in employing ‘Pinocchio’ Barnett.

Further to my letter of the 21st May, I’m afraid I must write to you to formally withdraw my previous offer.

Word has reached us that you continue to tell “great big fat whoppers”. In view of this, concerns have been raised that we would not be able to get either your enlarged nose, or the enormous prosthetic necessary to simulate the one you deserve, into an average theatre. You are quite simply too much of a liar even to play the legendary Pinocchio Mr Barnett.

I can only offer you the consolation that, at least for the moment, your current employers, Edinburgh Criminal Justice Services, seem to be a great haven for the untruthful. If your nose should ever, once again, shrink to more manageable proportions, or if your reputation for dishonesty should diminish to the point we could match it with a prosthetic that would not be a danger to other cast members, please do not hesitate to get in touch.


Leeds ABC would like to wish ‘Pinocchio Productions’ good luck in finding someone to fill the lead role in their production. Might we suggest sending talent scouts to Prison Service Headquarters, The House of Commons, and the nearest police station. We also hope that Barnett’s senior colleagues wake up to the damage he is causing in his current profession, and send him packing just as ‘Pinocchio Productions’ have done.

There will be a Day of Action in support of John Bowden, the victim of Brendan Barnett’s outrageous lies, on Monday 11th June (see

http://leedsabc.org/day-of-action-in-support-of-john-bowden-11th-june-2012/). In the meantime please send careers advice to:

Letters of support can be sent to John Bowden at: