A lively demo took place in Oxford today to support the group of detainees in Campsfield who are currently on hungerstrike. 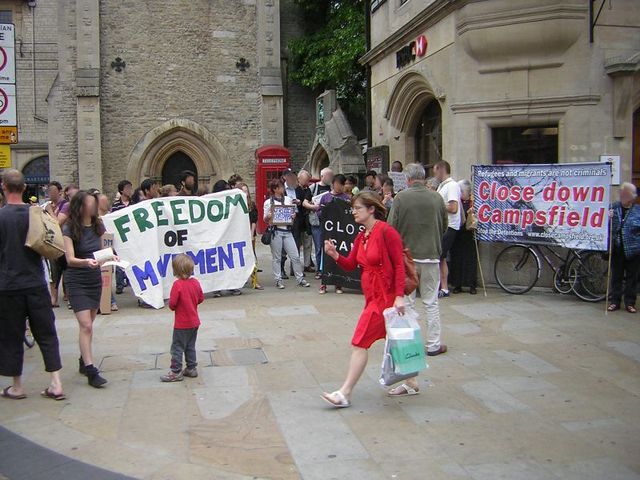 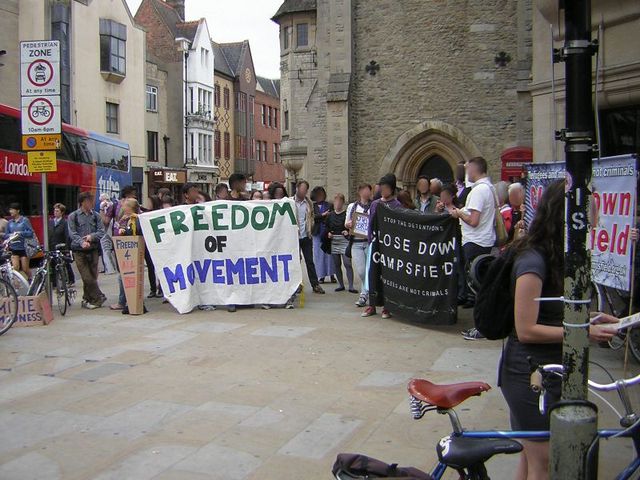 side view of demo 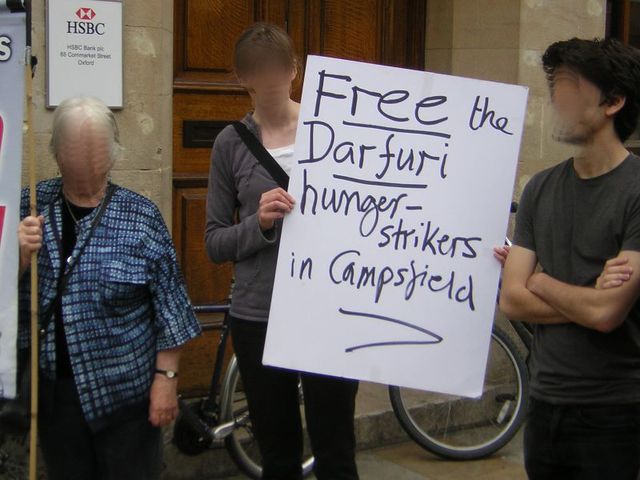 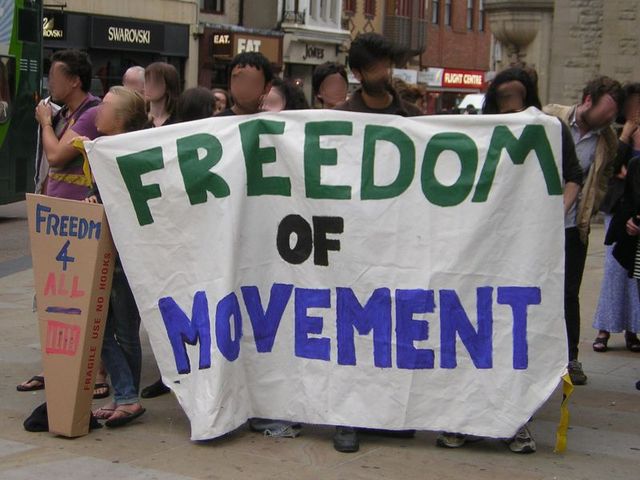 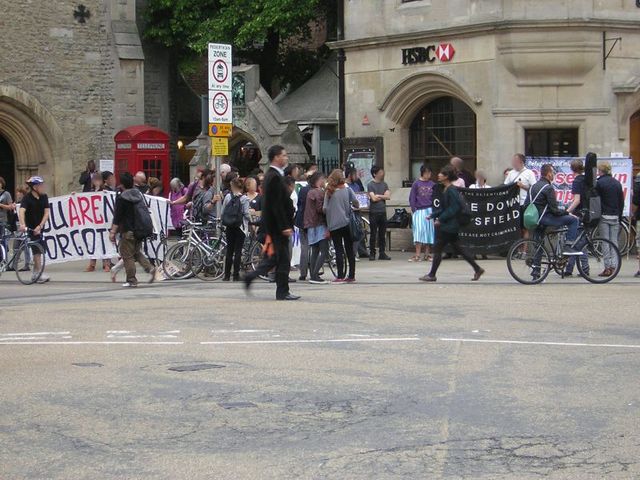 demo from the other side of the road

7 guys from Darfur detained in Campsfield migration detention centre near Oxford have been on hungerstrike since 24th May. Some background info is here:

Today a pretty sizable (esp considering it was called at short notice) group of people held a demo in Oxford town centre to publicise the hunger strike and encourage people to call on the authorities to release the detainees, and to get involved in local migrant support groups.

Chants included:
"Never mind the Jubilee, just release the detainees!"
"Freedom NOW!"
...as well as the usual classics and some improvised songs.

Updates on the hunger strike:

After people kicked up a fuss about visitors being blocked from meeting the hungerstrikers on Wed, the Centre Manager of Campsfield apologised, tried to blame others lower down (the Duty Manager and Residential Manager), and claimed that their decision, although "ill informed", had not been "politically motivated" but "based on concerns regarding detainee welfare and the maintenance of safety and good order in the centre".

As a result of all this we were able to visit on Thursday.

Having spoken with detainees face-to-face and got more accurate information, it appears there were originally 11 hunger strikers, all from Darfur. 1 dropped out, 1 was moved to Colnbrook, 1 released and 1 has decided to start eating because he will be released. Contrary to suggestions by Campsfield staff, all 7 remaining hunger strikers refuse all food. They are taking water but refuse to put vitamins in the water.

Hunger strikers were put under pressure to sign a form relieving Campsfield management / the UK Border Agency from all responsibility for the effects of the hunger strike on the men refusing food when UKBA came to visit them today. The form was not even translated and the hunger strikers refused to sign it.

We heard today (Friday) that 4 more of the remaining 7 hungerstrikers have been moved to Colnbrook detention centre, while 3 remain in Campsfield. Clearly the authorities hope that by splitting the group up they can break the hunger strike.

Finally, the sensational backstory of one of the men - who is happy to go public with all the details below - is included here:

SAF (Sudanese Armed Forces) attacked his village in 2007. He was shot
in the leg and still has marks from bombing by Antonovs when hiding in
trees with others. He went to Juba in 2008-09 where he had a surgical
operation putting a plate in his leg. However, the job was clearly not
well done as he has constant pain in his leg now and cannot walk for
longer than 15 minutes. Even during the visit he had to constantly
move and was obviously in discomfort.

In 2010 he went to Khartoum and lived in guest houses in the
possession of Minni Minawi Al Feteehab in Omdurman. (MM = Darfur rebel
leader who at the time had joined the Government of Sudan but is now a
rebel leader in the Sudan Revolutionary Forces again). When Minni
Minawi left the government, NISS (National Intelligence and Security
Services) agents approached him and asked him to testify on video that
Minni Minawi had abandoned his people, in return for money and
accommodation. He decided to run away and went to stay at the house of
a relative in Omdurman, but NISS found him and arrested him in
September 2010. They imprisoned him at Kober Prison without charging
him at any point. He says they did not torture him, but when asked to
describe some of the things they did, he said they kept him in
handcuffs for a whole month and constantly deprived him of sleep. He
also complained that they made him clean their offices, describing it
in the same terms! He was released in May 2011. He was told he had to
report every Tuesday in a building behind the Canadian Embassy.
Instead he went to Juba where James Wani Igga (Speaker of the SSLA –
the South Sudanese Parliament) wrote him a letter to be able to take
hard currency out of a bank so he could go to Europe and seek medical
treatment for his leg.

He woke up in hospital in Dover after jumping off a bridge on to a
train and hitting his head. He was moved to detention in Dover the
very same day and his initial screening asylum interview was done
while he was still affected by the concussion, dozy and unable to
remember things properly. After three days he was moved to Campsfield
on 26 March 2012, where he has been ever since.

He says he was in prison for no reason in Sudan and now is in prison
in Europe despite having committed no crime. He wants to get medical
treatment for his leg and wants to be medically assessed even while in
detention. This was his main reason for coming to Europe and is still
his main aim. He wants to be released, but would be happy to be
removed to Juba in South Sudan, or even to France, since the UK Border
Agency tell him they have evidence he was in France. He has had a
conversation with the South Sudanese Embassy in London to the effect
that he believes they would be fine with him living in Juba, but the
Home Office refuse to remove him to Juba. He says he cannot go to
Khartoum and if he did he does not know what would happen, and
believes he could be arrested at the airport with no-one to look out
for him, and "disappear". While the UK Border Agency say he was in
France, they are unable to remove him to France at the current time
and say removing him to France could take a long time.

He has gone on hunger strike demanding to be released or given a
ticket to another country (other than Sudan, but he would be okay with
South Sudan) where he will be allowed to stay. He will stay on hunger
strike "to the extreme" until this happens.

He has no lawyer. When he applied for return to South Sudan, he was
told that he did not need a lawyer. He did not know anything about
appealing his refusal.

Mohamed says there were originally 11 Darfuri men on hunger strike.
One dropped out, another was released, another has been moved to
Colnbrook IRC near Heathrow, another has started eating again as his
lawyer has told him he will be released. 7 remain on hunger strike.
They are refusing all food (which is cruelly brought to them at
intervals, and they have to refuse it), and drinking only water. They
refuse to have vitamins in their water. Today (01 June 2012) was the
8th day of the hunger strike.

Today the UK Border Agency came and asked him and the other hunger
strikers to sign a form which they were told said that Campsfield /
the UK Border Agency were not responsible for any ill effects that
resulted from the hunger strike. He and the other hunger strikers
refused to sign it, saying they were responsible as they could end the
hunger strike by releasing them or removing them to a safe country. At
least one other man is accused of having been in another European
country before arriving in the UK. He says that if this is true, he
should be removed there rather than staying locked up with no time
limit.

Mohamed says he is happy for all the above details to be public.