This afternoon's actions by Brightoners against the English Defence League proved a valuable lesson in the value of protest. Without the concerted efforts of the hundreds who turned out, the members of EDL would tonight be downing pints of cheap lager in the city's bars. Instead they have been thrown out of town - hopefully for good. 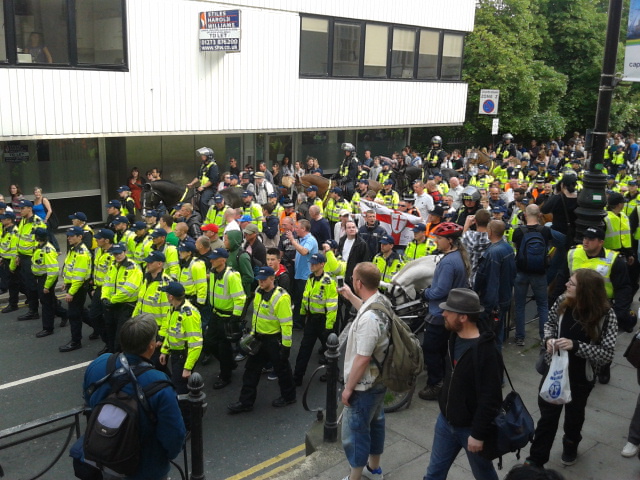 This afternoon's actions by Brightoners against the English Defence League proved a valuable lesson in the value of protest.

Caught sunning themselves on St James' Street and the Palace Pier, the EDL were swiftly surrounded by hundreds of irate Brightoners.

Police were forced to intervene but despite overwhelming numbers and reinforcements from Hampshire, were unable to prevent repeated skirmishes.

Ultimately commanders took the sensible decision to kettle the right-wing hooligans, before escorting them to Brighton Station, accompanied by a rapidly-growing crowd, eager to see intolerance thrown out of the city.

Here's how how the action panned out:
1.00 UKUncut, Smash EDO an Brighton anti fascists are having tea and cakes at Churchill Square. Some fine cardoman tea is served, alongside Jam Cakes. Highlights include a puppet show, a a casio organ player, and some rousing oratory.

1500 EDL have been sighted in Kemptown. Brighton anti fascists begin to move, heading down North Street. The cops panic; blocking the whole road, and sending the horses in for good measure. Protesters escape down vaious side streets. The afternoon's consumers look a little uneasy; have Sussex's finest just kettled a bunch shoppers?

1527 Protesters gather again on the Steine. From Kensington Gardens five overweight, bald men cross the road and head up St James' Street. Cries of 'Fascists go home,' erupt; one woman begins to prod the men with the tip of her black flag.

1534 Police arrive in force at the junction of the Steine and St James'. This doesn't prevent two men in England t-shirts enter the crowd, throw a few punches and then run off. It's a hit and run tactic that will be seen all afternoon.

1556 Police horses dominate the road. At the pier, a group of twenty men, some wearing EDL shirts, start to chant.

1559 Police lines form and are broken. The protesters hang back at the bottom of St James' Street. Large, burly men approach at a distance, and begin chanting: 'EDL, EDL.' A woman screams. The crowd surges towards them.

1602 EDL race to the bus station. They have made Belushi's Bar their base. Some are shoved and thrown bodily out of protesters' lines. Police horses charge between the two sides; soon all northern entrances to the bus station are blocked, the EDL pinned inside.

1615 Or maybe not. Two escape the kettle; one is grabbed by Gold Command, no less, who makes the arrest. The arrestee is drunk, sweating with some dodgy toothwork - this doesn't prevent him giving protesters the finger as he's led away in handcuffs.

1620 An EDL member is in the crowd with protesters. "Yeah, come on, I'm standing here in the middle of them." Again, he's thrown bodily into the arms of the cops.

1630 Yet another EDL is in protesters' lines, this one with a Thai-looking woman at his side. 'Get a job,' she yells, 'I've got one, thanks,' says a chap dressed in black, 'you get a job.' 'I've got a job,' she replies. A pause. 'What do you do?' the black clad chap asks. 'I'm a cleaner,' she says. It's the nearest the two sides will have to a discussion all afternoon, and is cut short by fellow anarchists ejecting the couple from the crowd.

1650 A protester is arrested for assaulting a police officer. Her crime, it appears, is to have clutched the arm of an officer as he threw her to the ground. Her family rally round as she is taken away, and head off to Hollingbury Police HQ.

1706 Police now have three lines across North Street; up ahead they have kettled around 30 EDL and are heading up the hill.

1720 The right-wingers are manhandled past the clocktower, and onto Queen's Road. The noise is massive: prostesters line the pavements, pouring scorn onto the bare heads of the out-of-towners. Shoppers, informed of what's going on, join the melee.

1740 Taken around the back of the station, the kettle moves through the rear carpark. Yet more Brightoners have gathered here, and taunt them. The police seal the station, and take the EDL inside.

The afternoon's valiant efforts by local people have prove an important point. Without the concerted efforts of the hundreds who turned out, the members of EDL would tonight be downing pints of cheap lager in the city's bars. Instead they have been thrown out of town - hopefully for good.

well done all of you!

but why oh why do anti-fascists so often have to make cheap digs about people bodies and appearances? lines like "The arrestee is drunk, sweating with some dodgy toothwork - this doesn't prevent him giving protesters the finger as he's led away in handcuffs" are soooo annoying and just take away from what is otherwise a good report on an excellent day.

the fash are so easy to criticise why resort to bollox about the way they look? its not necessary, you can slate their ignorance or their politics without effort as they are shit and obviously so.

does a person have to be thin, heterosexual, and have good teeth to engage politically? no of course not. i have a beer belly and my teeth are fucked, but am anti-fascist through and through.

I saw much of the 'demonstration' today. Well done to all who turned out to make clear that violent, crude fascist thugs are not welcome in Brighton. The arrest of the lady by the old steine, part of which I witnessed, is disconcerting.Nobody should be in any doubt as to the kind of people the English defence League are so well done all

Yes, indeed, liars never prosper. Reading your casuals blog entry about Brighton is like reading about some alternative reality.. loved the bit about knocking people out left and right.. I know that is your wet dream guys, but it involves actually training a bit instead of downing pints of lager and taking lots of coke :) Whatever you are going to writy in your shitty little blog, the entire day was utter failure for you.

I think you need to get laid more often. It sounds like your bollocks might explode in a shower of backed up self-righteous anger any minute. Maybe you need to spend less time engaging in laddish male bonding with your patriot pals and spend a bit more time getting comfortable with your sexuality.

A scruffy self hating moron TM

not all short haired people are racists

i would like to say that i saw the anti right wing side still picking on people who had nothing to do with protesting or the EDL as they headed to the station.
Passion is good on both sides but if you want to shout at people be sure they are deserving of your off our street chants.
Freedom of speech means though that we may not agree with other peoples views that's Muslims who are against gays or EDL that are against Muslims burning poppy's but this is small sections of community's my personal opinion is that this is England and i am proud to live here and share my country if those that enter respect my country and our traditions and i will try and understand theirs.
non violence is the way forward have your say spread the word of what you believe but don't force it upon everyone.
I love gay pride but some people may hate it my feeling is you don't have to go to it if you are offended but should anti gays be able to stop it.
so use your freedom wisely.
.

I may not agree with what you say but I will defend to the death your right to say it?

Though these words are regularly attributed to Voltaire, they were first used by Evelyn Beatrice I may not agree with what you say but I will defend to the death your right to say it?

So please respect others views THIS IS ENGLAND our fore fathers fought for our rights and those who live here.

But burn poppy's on our streets is ok.

But EDL is not allowed a voice.

Protesting against a golden jubilee ok.

Royal family generate an income for our country.

How much does it cost to police these protests.

How much to fight a war for a country that then hate us after we leave.

Who is right and who is wrong that's the great thing about choice its yours to make.

THIS IS SUPPOSED TO THE UNITED KINGDOM OF GREAT BRITAIN.

Rights and Freedom to all.

wanted photos of the silly little boys and girls who came to the seaside town brighton looking for a ruck and got the piss taken instead we need more photos with names to update what we have of fash across the country
love annie fashwatch.weebly.com 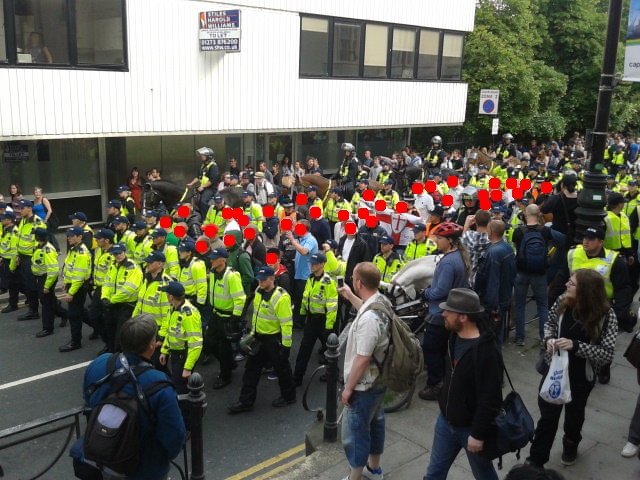 Errrm, does this actually count?

I actually counted how many edl there were in that photo.

Is the blatant anti-working class trashy comments in this article necessary?

EDL Scumfucks And Their Trolling Followers 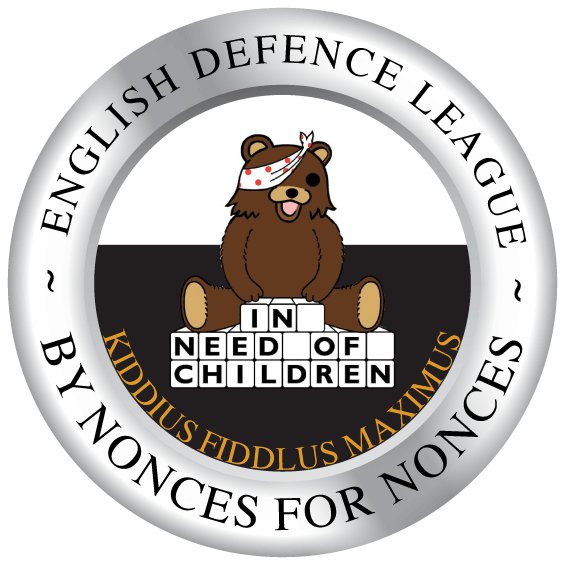 Fuck off Ben or Arthur, or whatever your EDL Trolling name is.

There's nothing to compare Brighton's Pride with a bunch of pissed-up racists goosestepping through the town.

Get a fucking grip, EDL followers.

YOU ARE NEO-NAZI SCUM!

Bristol won't be so welcoming to the fash scum!

It's a hotbed of militant anarchism!!!

So we have the thruth then. the EDL are not interested in Sharia law or anything even remotely to do with Islamics or Muslims.

The EDL are a political group setup to oppose the Socialists in the UK. They are an anti-protest group and are officially anti-Indymedia too.

They have only one interest and strategic aim. To keep people from protesting on the streets of Britain. All this crap about the Caliphate is exactly that...crap.

They are here to prevent protest, freedom of speech, freedom of assembly and freedom of movement. They are almost certainly a part of the current Governments anti-protest agenda. They were probably setup with the help of Conservative funding.

They are here to OWN protest.