No lock-ons, tripods or superglue...just bodies. A spontaneous sit-down protest in front of an airport-bound deportation coach helped gain time for a last ditch legal challenge, which cancelled the enforced removal of about 40 ‘failed’ Tamil asylum-seekers. 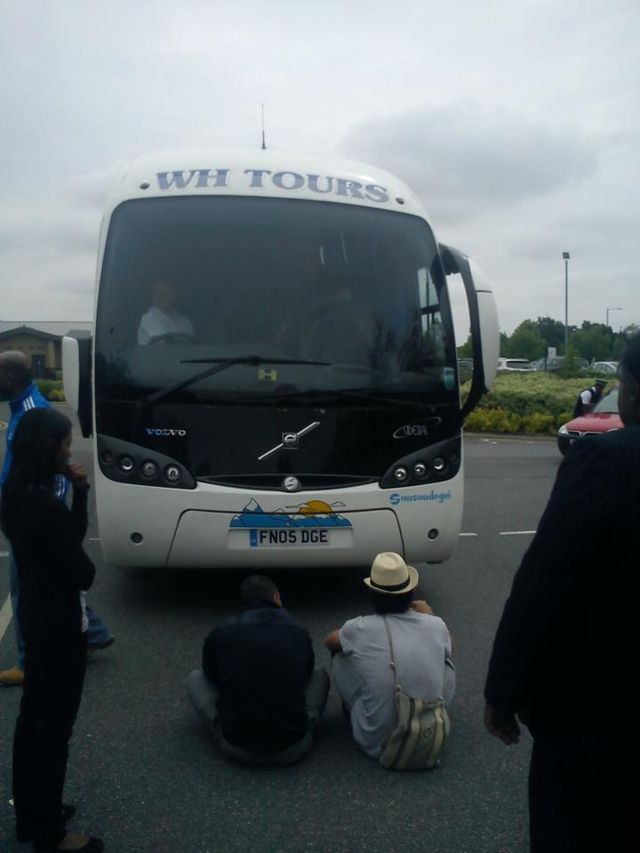 A defiant protest by family, friends and supporters of Tamil refugees outside Colnbrook Immigration Removal Centre (IRC) Thursday morning delayed the departure of an airport-bound deportation bus, but ended with 4 arrests. Their action provided extra time for barristers to win very last minute injunctions from the High Court, which cancelled the deportation of around 40 people; one man was already seated aboard the aircraft with the engine running when news came through that his removal was stayed.

Two large coaches loaded with deportation guards had arrived at Colnbrook IRC at 8.20am. A dozen friends and family members of deportees gathered from 9am for an emotional farewell vigil outside the detention centre. Supporters believed that some of the people due to be deported would be tortured by the Sri Lankan government on return. Their claim is supported by several new reports. [1][2][3]

When the first coach tried to exit Colnbrook at 11 am, supporters spontaneously ran out in front of the coach in protest. Several people sat in the road and the coach driver turned off the engine. The second coach was able to exit the detention centre.

Security staff and police were challenged about their awareness of the human rights situation in Sri Lanka – protestors brandished copies of Freedom From Torture’s report into ongoing torture in Sri Lanka and asked them if they had watched Channel 4′s ‘Killing Fields’ documentary, which none of them had. Protestors also reminded the most senior police officer at the scene, Inspector Qasim, of Britain’s obligations under Article 3 of the UN Convention Against Torture (“No State Party shall expel, return (“refouler”) or extradite a person to another State where there are substantial grounds for believing that he would be in danger of being subjected to torture”).

More police were called to the scene, including a dog unit and a firearms officer, in what felt like an attempt to intimidate the small group of a dozen supporters. The police, of course, did not facilitate free assembly and expression, instead deciding to stop people from protesting at 11.30 am. They forcibly cleared protestors from the road, without making clear which section of the Public Order Act they were using. 2 protestors were aggressively handcuffed, and another 2 bystanders were randomly arrested. The coach then left for the airport, and the arrestees were taken to West Drayton Police Station.

They were held in custody for almost 12 hours before being released: 2 without charge, 2 on minor charges.

This 30-minute delay was crucial in barristers obtaining injunctions in the High Court preventing many people from being deported. Justice Eady stated that “the recent Human Rights Watch report, dated 29.05.2012 suggests that there may be new evidence relevant to the risk of ill treatment”. Channel 4 explained that: “The Human Rights Watch report in question called on the government to suspend the planned deportations in light of 13 cases it had documented of failed Tamil asylum seekers being tortured by the security forces on return to Sri Lanka, most recently in February this year”. Yesterday’s flight was the fifth British government charter flight to Sri Lanka since June last year.

Sources at Colombo Airport claim that 36 people were however deported (22 Tamils, 8 Sinhaleese and 6 Muslims), accompanied by 72 British officials, and interviewed on arrival by the notorious Sri Lankan C.I.D. It is standard practice for the UK Border Agency to employ at least 2 private security guards from the firm ‘Reliance’ for each deportee.

There are more videos of yesterdays protest which will be published at some point.