Activists from Palestine Place today joined a coalition of Protesters from over 20 different organisations (including No Borders, War on Want, Women of Colour united, The National Coalition of Anti Deportation Campaigners, and others) to form a visual and physical protest presence outside the G4S AGM which was held in Paternoster Square. 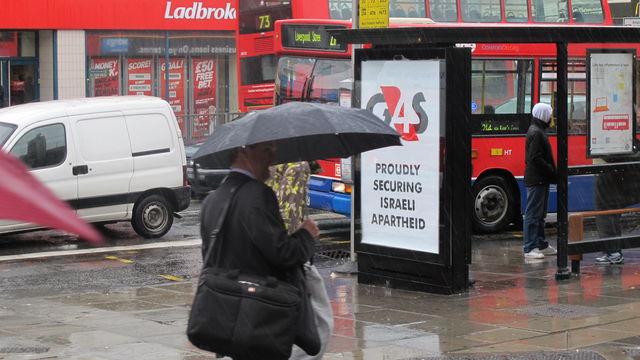 More than 50 people today joined a vibrant demonstration to protest against notorious security company G4S and it's involvement in the Israeli apartheid state, forced prison slavery, and the deportation machine; as well as it's involvement in a whole range of privatisation projects and the workfare scheme.

Some protesters dressed in prison garbs and chained themselves together to form a visual spectacle of what G4S do, whilst others held placards with slogans such as "securing apartheid" and "deadly deporters". Zines written about Jimmy Mubenga, who was brutally murdered by members of G4S as they tried to forcefully deport him, were handed out; and activists even managed to hand spoof AGM programs detailing G4S most inhumane elements to shareholders visiting. A large banner which read “Solidarity with Palestinian Hunger Strikers” was attached to two bikes inside Paternoster square and activists spoke to many members of the public about the plight of Mahmoud Sarsak currently in his 82nd day of hunger strike. The demo lasted for several hours, before protesters eventually dispersed, many heading back to Palestine Place for a number of events scheduled tonight.

Elsewhere in the city G4S were busy putting up posters for there new advertising campaign, which can be seen outside Kings Cross Station.