The London Guantánamo Campaign [1] regrets the decision of the American Supreme Court, on 11 June, to reject petitions from 7 Guantánamo Bay prisoners [2], held without charge or trial for over a decade, to challenge the basis of their detention. This comes in the same week as the 797th anniversary of the Magna Carta, on Friday 15 June, conferring the rights to a fair trial and habeas corpus [3], among others, for almost the past eight centuries. The court gave no reason for its decision to overturn this basic right it had earlier upheld.

The London Guantánamo Campaign will mark International Day in Support of Victims of Torture, on 26 June, with a vigil in Trafalgar Square at 6-8pm: 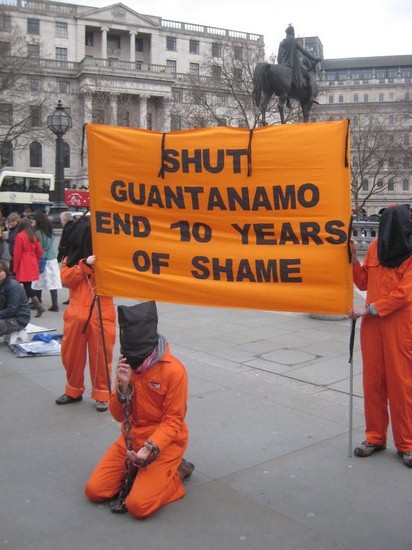 On the same day, 11 June, the Save Shaker Aamer Campaign [4] marked this upcoming anniversary with a protest outside Parliament calling for the release and return of British resident Shaker Aamer [5] to the UK and demanding that the government uphold his rights under Articles 39 and 40 [6] of the Magna Carta.

Aisha Maniar, a spokesperson for the London Guantánamo Campaign, says, “Almost eight centuries of hard fought-for and secured basic legal rights and liberties have been eroded through over a decade of indefinite detention and mistreatment under Presidents Bush and Obama at Guantánamo Bay and other places like it. Basic rights have been denied not just to these prisoners, but to all: the logical extension to this regime is the National Defense Authorization Act (NDAA 2012) recently passed by the US government.

“The British government has fared no better through its failure to secure the release of British resident Shaker Aamer, who has been detained by the US without charge or trial at Guantánamo Bay for over a decade, and its current efforts in the Justice and Security Bill to deny claimants the right to open justice and a fair hearing. Where then is the protection for ordinary citizens against arbitrary acts of the state?”

The London Guantánamo Campaign will mark International Day in Support of Victims of Torture, on 26 June, with a vigil in Trafalgar Square at 6-8pm:

http://www.supremecourt.gov/orders/courtorders/061112zor.pdf The prisoners are from the 40 detainees remaining at the camp who do not face trial or charges but have been held for over a decade without knowing the grounds for their detention. 169 prisoners remain in total.

3. The Magna Carta was signed in 1215, a charter granting rights and freedoms to ordinary subjects. It is a cornerstone of the English legal and constitutional system and has influenced American and international law.

Habeas corpus is an application made by a prisoner, or on their behalf, to a court for said prisoner to know whether there is sufficient cause and evidence for continued detention. It is considered to safeguard individual freedoms against arbitrary state action.

http://caselaw.lp.findlaw.com/scripts/getcase.pl?court=US&vol=000&invol=06-1195), the Supreme Court held that this constitutional right – to know the case against you and reasons for detention - extended to prisoners held at Guantánamo Bay.

5. Shaker Aamer was cleared for release by the US military in 2007. He claims to have been tortured repeatedly during his time in US custody, on one occasion in the presence of a British intelligence agent. He has a British wife and four children living in Battersea, south London. Former Prime Minister Gordon Brown sought his release in August 2007, along with four other residents held at Guantánamo Bay, the last of whom was released in February 2009. His lawyer, Clive Stafford-Smith, has recently expressed grave concerns for his physical and mental health due to prolonged arbitrary detention.

6. Article 39. No freemen shall be taken or imprisoned or disseised or exiled or in any way destroyed, nor will we go upon him nor send upon him, except by the lawful judgment of his peers or by the law of the land.