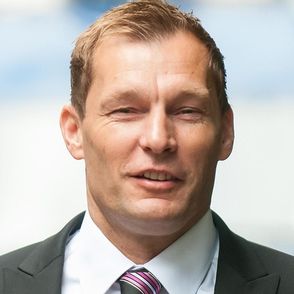 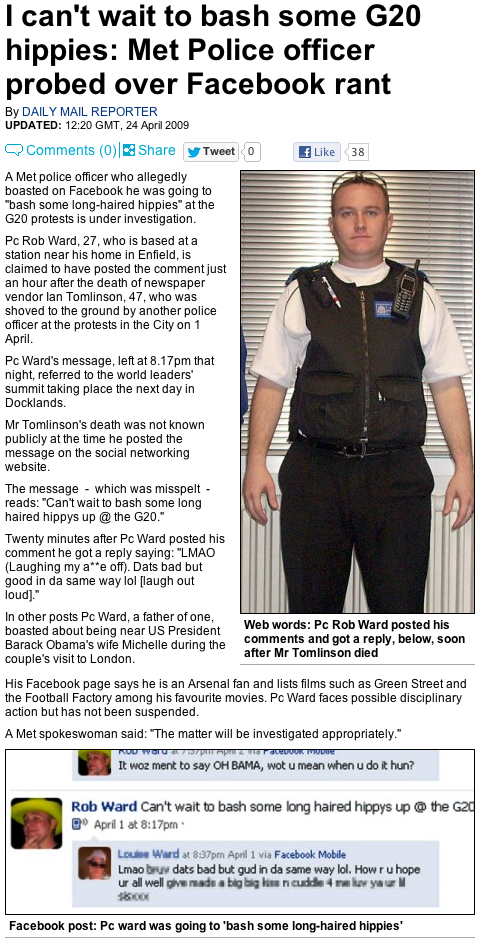 Today, 18 June 2012, BBC News reported that innocent pedestrian Ian Tomlinson was killed at the G20 protest in London, 1 April 2009, as the result of a "gratuitous act of aggression by a lone (police) officer" - Metropolitan Police TSG officer PC Simon Harwood from Carshalton - "whose blood was up". The BBC imply this statement was made by prosecuting QC Mark Dennis, and if so Mark Dennis should choose his words more carefully, as Simon Harwood was not alone in wishing to attack G20 protestors, and many of Simon Harwood's police colleagues actively contributed to events which helped hasten Ian Tomlinson's death and actively participated in many stages of the subsequent cover-up.

Throughout the day PC Simon Harwood and other police officers hid their ID numbers, and an hour after Ian Tomlinson was killed, PC Rob Ward from Enfield posted on Facebook saying he "can't wait to bash some long haired hippys up @ the G20" (meaning at the next day's protest outside the G20 summit in London's Docklands). The police lied to the media, resulting in news reports that police had been "pelted with bricks as they help dying man", when in fact this had not happened, and instead the police had ignored their victim's pleas for help, forced away an ITV photographer and a medical student who'd tried to give medical aid, and refused to co-operate with an ambulance crew who were trying to save Ian Tomlinson's life.

The BBC's own dishonesty comes however in reporting that earlier in the day PC Simon Harwood had [quote] "tried to arrest a protester who he had seen trying to write something on the side of a police van", that "the demonstrator managed to wriggle free" and that Simon Harwood "then decided to join other officers who were on foot in Threadneedle Street". What really happened was that far from managing to "wriggle free" the protestor had his head smashed into the side of a van door by Simon Harwood, who then, rather than deciding "to join other officers" instead attacked a BBC cameraman and attacked a City worker before going off kill Ian Tomlinson. It would be much appreciated if the BBC would please stop lying about police brutality.

Simon Harwood's police colleagues then procured a fraudulent pathologist's report, and colluded with IPCC chairman Nick Hardwick in pretending no CCTV cameras overlooked the scene of Simon Harwood's attack. Among many other police attacks during the same protest, PC Delroy Smellie slapped and truncheoned female protestor Nicola Fisher, and other police officers truncheoned and kicked peaceful Climate Camp activists as they held their hands in the air chanting "this is not a riot".