Bradley Manning, accused WikiLeaks whistleblower, is back at Fort Meade, Maryland, USA today for another pretrial 'motions' hearing. He has now been incarcerated for 25 months in circumstances that make a fair trial impossible. Solidarity actions are taking place around the world today. In Wrexham, banners were put up over the main A483 by-pass this morning. 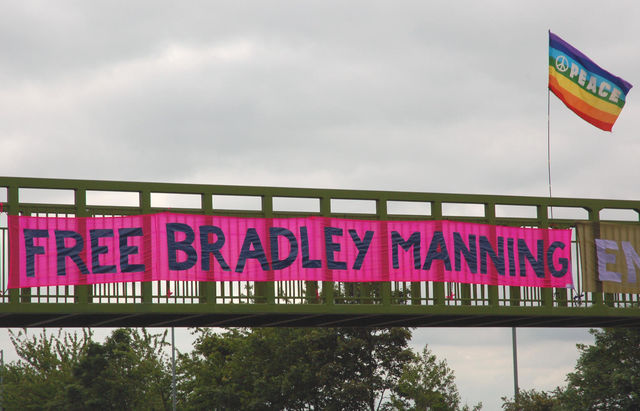 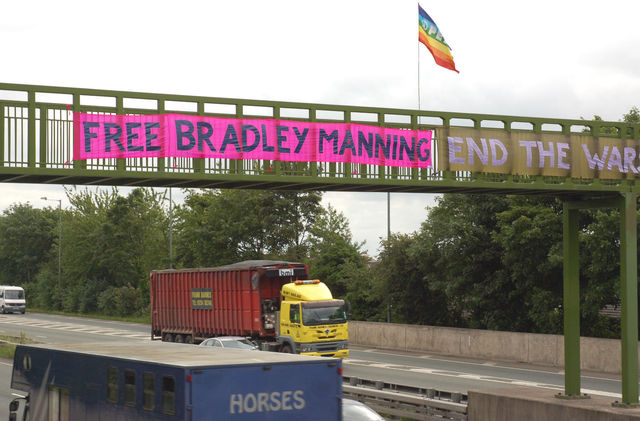 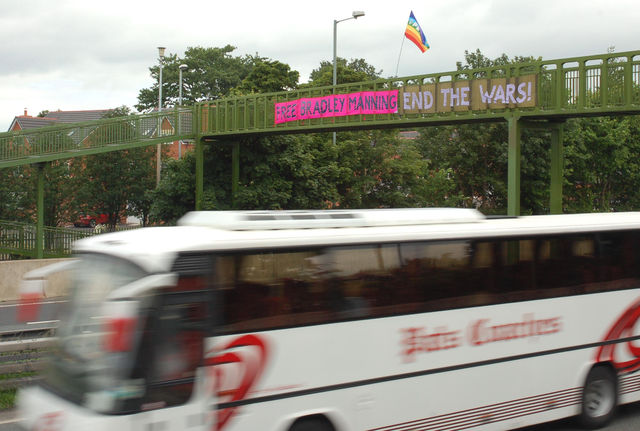 THE TORTURE AND PERSECUTION OF WHISTLEBLOWERS

Bradley was tortured for 11 months by the US while in detention, just one example of the breach of his constitutional rights. Commander-in-Chief of the military, President Obama, preempted the court martial and declared him guilty over a year ago, one of many reasons why a fair trial is now impossible.

Obama was elected on a platform of increased protection for whistleblowers but more have been prosecuted under his administration than under all previous US administrations put together, just as the classification of documents as 'secret' has reached unprecedented levels under his leadership.

Bradley Manning has connections with Wales: his mother was born and still lives here along with other members of the family, while Brad himself lived in Wales for several years as a teenager. Activists held three weeks of solidarity actions and events in Wales for Bradley during April:


FODDER FOR THE ANTI-WAR MOVEMENT

The huge collection of documents Bradley Manning is accused of leaking have given the world an unprecedented insight into the wars being waged by the US with British support, notably Iraq, Afghanistan and the ubiquitous so-called 'war on terror' as well as exposing the nature and extent of US meddling and machination around the world. Although much of the information contained in the war diaries, war logs, diplomatic cables and so on was already known or suspected, these documents have provided irrefutable evidence, much of it 'straight from the horse's mouth': a vast dossier of information for the anti-war movement.


SUPPORT THOSE PERSECUTED FOR SPEAKING TRUTH TO POWER

Celebrated American whistleblower Daniel Ellsberg, who leaked the 'Pentagon Papers' during the Vietnam War, said he's been waiting 40 years for another large-scale leak to happen. Now that it has, the least any of us as anti-war activists can do is to show our solidarity with those being persecuted for getting the truth out, notably Bradley Manning and Julian Assange.

Prosecutors in Bradley's case have been withholding evidence that the defence has requested and that should have been disclosed. The defence team has now filed a relief motion for this hearing calling on the military judge to temporarily suspend court martial proceedings and order the prosecution to explain itself.

Photos from second banner drop and report from the court 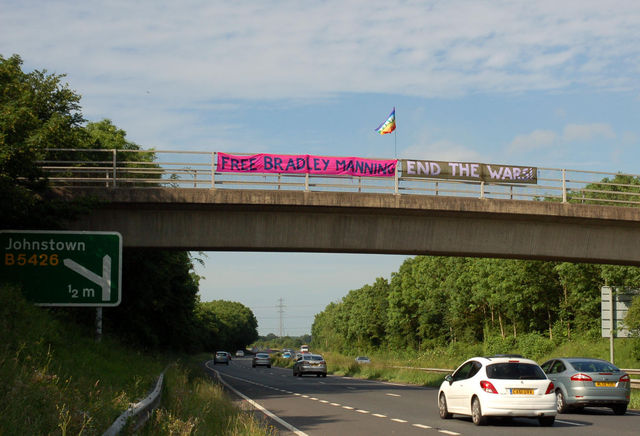 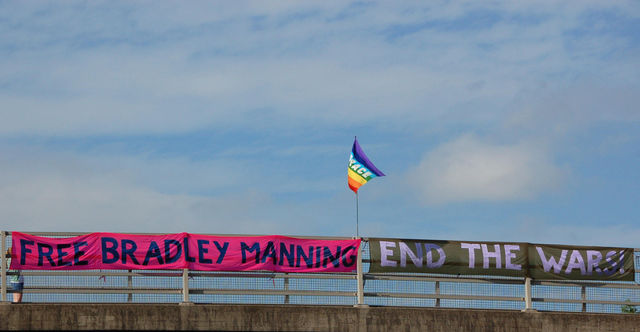 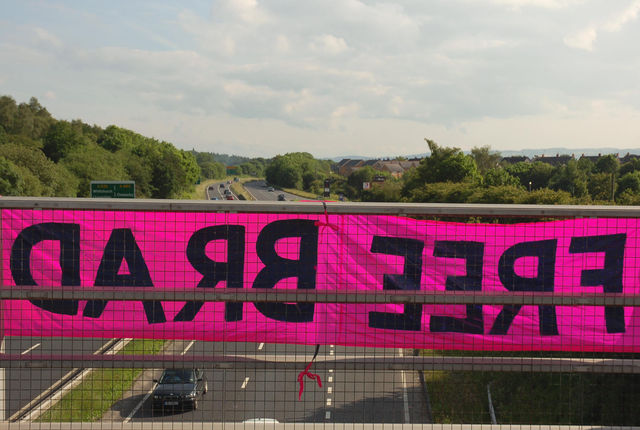 As Bradley Manning's hearing was getting underway at Fort Meade, Maryland, there was a second solidarity banner drop in Wrexham from 4.30-6.30pm.

FORT MEADE, Maryland -- Judge Denise Lind ordered military prosecutors to provide a detailed account of their discovery of evidence that could help PFC Bradley Manning's defense. The ruling came in response to a motion by lead defense counsel David Coombs, who cited misleading statements made by government lawyers about their efforts to locate required materials.

"The Obama administration can't hide from reality forever" said Jeff Paterson, a lead organizer with the Bradley Manning Support Network. "Any ruling in favor of the truth is a victory for Bradley Manning, because the government's strategy of abuse, obfuscation and outright deception simply won't stand the light of day."

Judge Lind also ruled that the government must provide impact assessments and other reports from the CIA, the FBI, the Department of State, and the Office of the National Counter Intelligence Executive (ONCIX). Coombs complained that he was only made aware of an additional assessment produced by the Department of Homeland Security (DHS) after the last round of hearings concluded on June 8.

"They knew DHS was doing an assessment for ONCIX and didn't tell the court," said Coombs, citing earlier suggestions made by prosecutors that there was no ONCIX assessment. "The court needs to pull at the string of this argument, because if you do, it falls apart."

PFC Manning's lawyers contend that these documents would show that there was no substantive harm posed to national security by the WikiLeaks releases.

On Sunday, hundreds of supporters of the accused WikiLeaks whistle-blower marched in LGBT Pride Parades in New York, Chicago, and San Francisco. Supporters are preparing for another round of demonstrations to coincide with pre-trial hearings scheduled for July 16 to 20 at Fort Meade.