The lead up to the Olympics has seen a rapid increase of police brutality against migrant communities in Calais and their supporters. Calais is an 'Olympic village' during the Games and in preparation the authorities have begun cleaning up the streets to make Calais 'migrant free'. 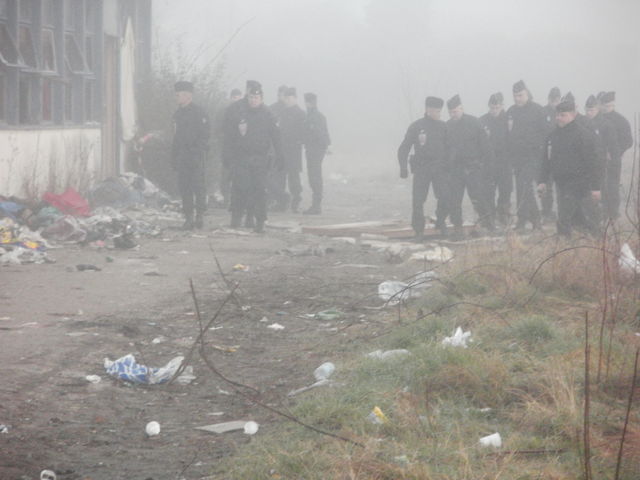 Eviction of the latest 'Africa House'

An eviction of a small 'global' squat 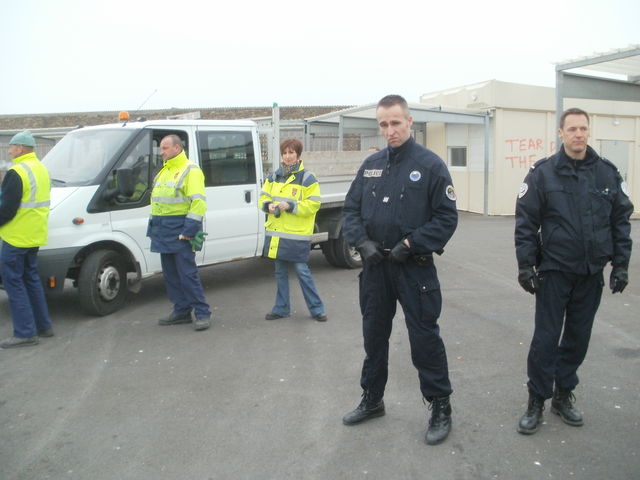 One of the many evictions of the 'Food Distro'

Over the last few months there has been a big sweep of people's living spaces, evicting and demolishing many of the buildings where people sleep and driving people out of the city.

After the eviction in March this year of the biggest squat, known as Africa House, many people with and without papers have been depending on smaller squats for shelter to avoid sleeping on Calais’ violent streets.

But these spaces have continually been raided and at least another 10 squats have been evicted since, including an Iranian squat, an Eritrean squat, a Somali squat, a Palestinian and Egyptian squat, a Sudanese squat and some mixed 'global' squats with people from Sudan, Eritrea, Chad, Iran, Afghanistan and Iraq.

All the long-standing squats have also gone within the last few months, including Palestine House, Paradise House and the Villa, which have been home to people for years.

There has also been continued destruction of migrant camps in the jungle, in town, in the parks or under bridges as well as constant evictions of the food distribution area – a concrete yard surrounded by barbed wire where people have resort to sleeping when they have no-where else to go.

It's not that raiding and evicting sleeping spaces is anything new, but these last months they have gone for everywhere and it has been near impossible for people to find shelter to sleep for any length of time.

It seems obvious this has been a part of a push to clear up the city for the Olympics.

At the end of March there was also a big round up and pre-emptive arrest of migrants and No Border activists during an official Olympic visit by the new UK ambassador Sir Peter Ricketts. People were held in custody for the duration of his visit and some people were badly beaten by the cops. (See

Evictions of squats have largely been illegal. In France residents must be informed beforehand, notices placed in City Hall and on the building set to be evicted, and people should be allowed to contest the decision and how to do this should be included in the notice. The police are also meant to show the judgement when making the eviction. This very rarely happens.

There has been some effort more recently to at least get court orders for a few of the evictions of the bigger squats, but most evictions are still being carried out illegally. The police consistently raid and evict when and how they like.

A social housing organisation, The Office Public de l’Habitat de Calais (OPH), is largely complicit in these evictions. They own a lot of empty buildings and have been authorising the evictions and demolitions, and showing up whilst police are kicking people out from their buildings onto the street.

For the Olympics the regional council are launching a dual operation, running an artificial 'Welcome the World' campaign to boost tourism from passing athletes and spectators whilst at the same time cracking down on migrants, driving out 'foreigners' who do not have cash to spend.

Over 100 million euros have been pumped into the area for the Olympics in order to build gymnasiums and boost  tourism. There is 34 Olympic and Paralympic training sites in Nord Pas-de-Calais and foreign teams have, and will, be training there. Last year 47 foreign delegations passed through, including for example from Pakistan and Senegal, visiting to use these facilities.

Last Thursday June 21st Manuel Valls, the French Interior Minister, visited both Calais and London, to discuss the Franco-British security during the Olympic and Paralympic Games.

In Calais he met with officials to talk about high security and surveillance of the port.  In London he met with his counterparts, Theresa May, the Home Secretary and Damien Green, Minister for Immigration, as well as James Brokenshire, Minister for Security and Counter-terrorism, to discuss 'terrorist' threats and immigration during for the Olympics.

During this meeting Theresa May also announced plans to hold a G6, bringing together the interior ministers of the six most populous European countries, in London in November 2012.

Security for London Olympics will see police and private security occupying the streets, flyer drones for aerial surveillance, warships docked up in the Thames, ground-to-air missiles on stand-by and snipers on rooftops.

State 'security', or in other words the attempt to control people, for 'immigration' purposes and against 'terrorism' is becoming very much hand in hand, with multinational arms companies and defence industries increasingly expanding into the realm of immigration control and merging surveillance systems.

The 'clean up' of cities in London and Calais in the name of keeping the Olympic industry and its spectators secure, is in reality an opportunity for reinforcing the deployment of draconian surveillance systems and arsenal of security measures to protect the privileged and their profit-making.

CALL OUT FOR THE SUMMER: people needed on the ground in Calais to support people with and without papers in the lead up and during the Olympics.

CALL OUT FOR SQUATTERS: supporting people find places to sleep would be much appreciated at the moment!

CALL OUT FOR TENTS AND SLEEPING BAGS!

Most needed: tents, sleeping bags, men's shoes like trainers, men's clothes esp. jackets and trousers, sporty not formal, it rains a lot over people who have nowhere to sleep, the noborders have a small garage for storing materials and have been doing distributions in emergency 24/7 since 2009, now with all the destructions of blankets, shelters and people property by police there is a major crisis, it is festival season in UK and it should be possible to collect lots of stuff, it was done the previous years but this year when is most needed I haven't heard from anyone...