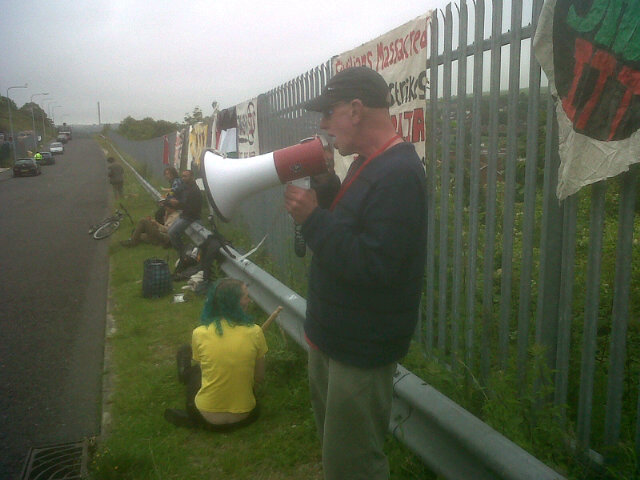 A bad singer outside EDO

Today activists bearing marracas, cymbals, a guitar and a saxophone made a cacophony of bad music outside the arms factory gates.

Last week Sussex Police nicked our sound system. Unperturbed tone-deaf anti-militarists sang Frank Sinatra, Jingle Bells and part of the sound track from Grease to the workers as they finished their shifts.

The local rag, the Evening Anus, published an article accusing Smash EDO of 'hijacking' the Olympic Torch ceremony by holding a mass demo (in Brighton) on the same day as the torch will reach Hove

http://www.theargus.co.uk/news/9784764.Smash_EDO_accused_of_hijacking_city_celebration/ - its really starting to seem like groundhog day, when we called our last mass demo The Argus accused us of planning to disrupt the Jubilee.

On top of that the MET have been emailing us asking us to liaise with them about protests at the Olympics, despite Smash EDO having no plans to demonstrate against the Olympics whatsoever.

We will be demonstrating outside Barclays, which provides services to EDO's parent company on the New York Stock Exchange and is the largest global investor in the arms trade, on Saturday at 1pm in North Street, Brighton.