New group Cardiff Migrant Solidarity have set up an anti-deportation campaign for Chijioke Elijah, A Nigerian Activist who was arrested in Bridgend on Tuesday 26th June. Chijioke Elijah is currently being detained at Colnbrook IRC and has been given removal directions for the 5th July charter flight that is due to land in several African countries. 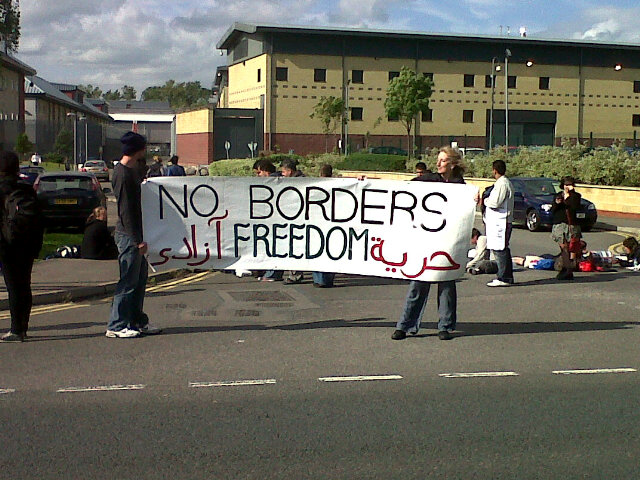 Blockage of Colnbrook in 2011 against charter flights

Cardiff Migrant Solidarity is a new group supporting refugees, migrants and sans-papier and fighting against racism and repression in South Wales.

Chijoke was forced flee Nigeria in 2005 following an extremely violent attack on him, which left him scarred and unconscious. He believes this was as a result of his activity with MASSOB, a political organisation that works for the resurgence of the state of Biafra from Nigeria. His family and friends are extremely concerned that he may be deported to Nigeria imminently and are very worried about his safety there. Recent news articles show that the Nigerian police are regularly using lethal force to control crowds at MASSOB protests.

For the past two years Chijioke has been engaged to Lisa, a British citizen. Lisa and Chijioke are very much in love and Lisa’s family has welcomed Chijioke with open arms. If Chijioke is returned to Nigeria his relationship with Lisa will be torn apart. With children and grandchildren in the UK Lisa is unable to relocate to Nigeria to be with Chijioke.

Cardiff Migrant Solidarity is calling for people to write letters to the Home Office, and MPs, on his behalf to try and reverse the decision to deport him to Nigeria. His campaign is also online at NCADC where you can find a template letter.

Chijioke says, “I can’t go back to Nigeria. My life is in danger there. I have a family here and I don’t want to be separated from them. My partner Lisa is devastated and her children were crying all day yesterday when they heard what had happened.”