On Tuesday 26th June, a group of people from environmental, development and farming groups joined together to denounce land grabs outside an international agricultural investors conference in London. 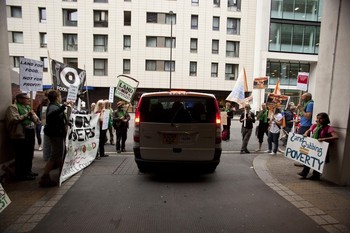 An Investors meeting at this week’s Agricultural Investment Summit in London got a clear message from protestors gathered outside – land is for people, not for profit!

Organisers of the £3,660-a-head conference call farmland “one of the greatest investments in the world” and bill the summit as an opportunity to “overcome the perceived obstacles to investment” with titles of talks such as “Agriculture in Africa: ‘land grab’ or untapped opportunity?”
Conference URL Ref:

Protestors voiced their opinions on the pavement outside the Victoria Park Hotel, near Victoria Station where inside delegates were enjoying a networking and drinks reception at the end of the day's sessions late afternoon Tuesday (the first day of the 3 day-event).

The protestors say that City investors and pension funds are taking land from countries and vulnerable communities who need it to grow food, with the increasing spread of land grab investments buying up agricultural/forestry land and land for prospective mining in developing countries worldwide such as across Africa, Latin America and the Indonesian archipelago by financial players such as pension funds.

The summit organisers, backed by the WTO, the World Bank and a host of financial institutions, describe their land grabs as an ‘emerging and expanding asset class’, and bill the summit as an opportunity to ‘overcome the perceived obstacles to investment’. It is time that we stand up in solidarity with those who loose their land and make it known that pension fund investors in London’s square mile are key players in this ‘global industry’.

Through land grabs a few powerful corporations are increasing their control over food and energy production, natural resource extraction and the lives of small-scale farmers across the world. Invariably land grabs lead to the eviction and displacement of local communities and increased poverty as rural communities are forced away from the land that they rely on and into the capitalist labour market.

Nyikaw Ochalla of the Anuak people from Ethiopia whose livelihoods are threatened by the land grabs of foreign companies. “Africa, Asia and Latin America are seeing an acceleration of land grabbing at a rate not seen since colonial times.”

The protestors will be demonstrating against the summit and have released a statement, signed by over 60 European and international organisations, calling for pension funds and other financial institutions to stop land grabbing.