Activists are staging a rooftop occupation at the headquarters of security multinational G4S near Crawley, West Sussex, in protest at what they claim are “illegal and criminal activities” in both the UK and Palestine/Israel. 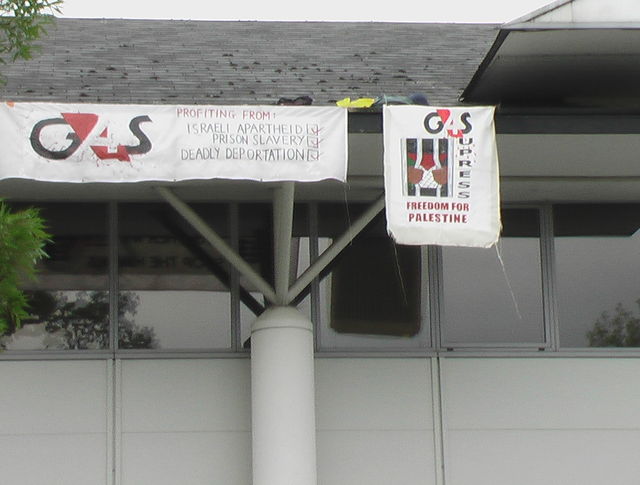 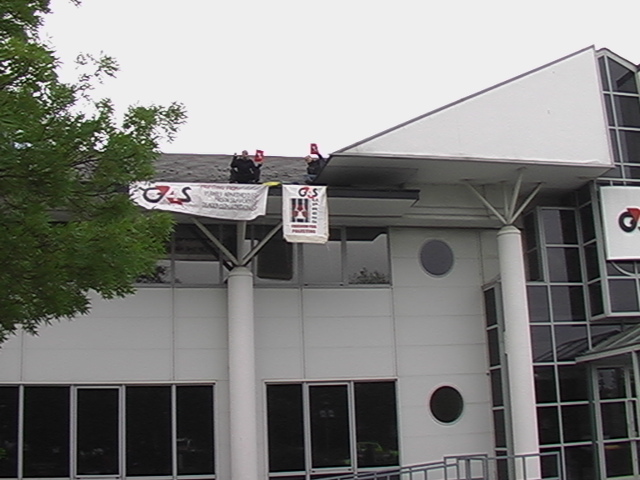 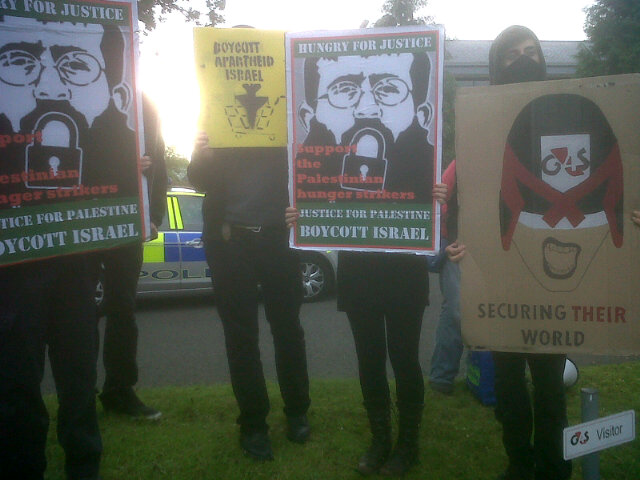 Activists are staging a rooftop occupation at the headquarters of security multinational G4S near Crawley, West Sussex, in protest at what they claim are “illegal and immoral activities” in both the UK and Palestine/Israel.

Early this morning, two activists climbed on top of the multistory building and
secured themselves in place using superglue and bike locks.

Two banners were seen hanging from the edge of the building. One read “G4S – Profiting from: Israeli Apartheid, Prison Slavery, Deadly Deportations”.

Another dozen protesters are surrounding the building on the ground, shouting slogan and holding anti-G4S placards.

G4S provides equipment to prisons inside Israel to which Palestinian political prisoners from occupied territory are transferred in violation of the Geneva Conventions, tortured and subjected to arbitrary detention.[1]

The company provides equipment to the Kishon and Moskobiyyeh detention facilities at which human rights organisations have documented systematic torture and ill-treatment of Palestinian prisoners, including child prisoners. A recent UK government backed delegation found that Israel is breaching at least six violations of the UN convention of the child in its treatment of child detainees.[3]

More than 1,600 Palestinian political prisoners went on a mass hunger strike on 15th April this year. Mahmoud Sarsak ended his 92-day hunger strike on June 18 and is due to be released on 10 July, but three others remain on hunger strike in protest against their detention without trial.[4] G4S also provides equipment to Israeli in the West Bank that form part of the route of Israel’s illegal Wall and to illegal settlements.

In the UK, G4S runs six private prisons at which 400 prisoners are forced to work 40 hours a week for as little as £2 a day.

The company also runs three immigration detention centres, where detainees have made repeated claims of abuse and assault.

Last year the company lost a multi-million contract with the UK Border Agency to deport refused migrants after 773 complaints of abuse were made against it and following the death of Jimmy Mubenga, an Angolan asylum seeker who died as a result of G4S security guards applying illegal restraint techniques. [5]

Despite all this, G4S is being awarded a wide range of public service contracts, from taking over police forces and providing controversial workfare schemes and asylum accommodation on behalf of the government to providing all security at the London Olympics. [6]

Today's protest is the latest in a new, international campaign against the
controversial company. On 7th June, more than 70 people demonstrated outside the G4S Annual General Meeting and handed shareholders an “Alternative Annual Report” detailing the company's alleged violations of human rights and international law.
[7]

One of the rooftop protesters, Tom Hayes from the Boycott Israel Network, said: “UK businesses should not be profiting from the detention and mistreatment of children.”

“Brutal systems of discrimination such as Israeli Apartheid are maintained because companies like G4S are willing to do business with them, in total disregard of the human consequences and of international law. G4S is an example of a business that cynically views the practices of such regimes as good for business.”

“Action much be taken to prevent corporate complicity with Israeli violations of international law.”

The other protester, Sean Flint from No Borders UK, said:

“I wonder how many Jimmy Mubengas it will take to realise that companies like G4S don't care about people placed in their care, but are only concerned with maximising their profits, no matter what the human cost.”

“Awarding control of the police, justice and prison systems to a company with such a blatant disregard for basic human rights, as the government has shown its willingness to do, is truly frightening.”

[1] For more information on the role of G4S in Israel and Palestine, see

[6] For more on G4S' activities and contracts, see

[7] For details of recent demonstration at G4S AGM see