Queer Friends of Bradley Manning will have a presence at Saturday's World Pride event in London. Join them to show your solidarity with Bradley Manning, the gay US military intelligence analyst with Welsh roots and accused WikiLeaks whistleblower who has been detained without trial for over two years, tortured and denied his rights. Brad faces life in jail without parole if eventually convicted as charged. Exposing war crimes is not a crime! 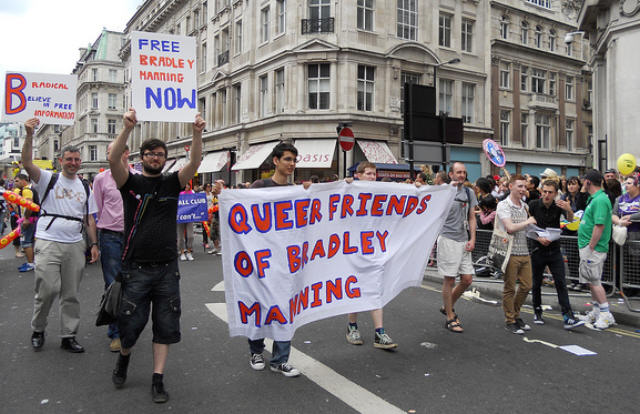 Queer Friends of Bradley Manning with banner at Pride London 2011

"The pre-march line-up takes place in Baker Street. Queer Friends of Bradley Manning is in the Green Section which meets from half way down Dorset Street up to Paddington Street - so if you walk that stretch of Baker Street you should find us."


DETAILS OF CUTBACKS TO THE EVENT THIS YEAR

The World Pride event in London on 7 July has been severely cut back with floats banned from the route and start times moved after a funding shortfall.