On Sunday a diving team of The Black Fish successfully released hundreds of bluefin tuna back into the Adriatic Sea from cages at a fish farm near the island of Ugljan, Croatia. The action is marking the start of a new campaign to highlight the lucrative trade in the endangered bluefin tuna, a fish species heavily impacted by illegal overfishing in the Mediterranean Sea. 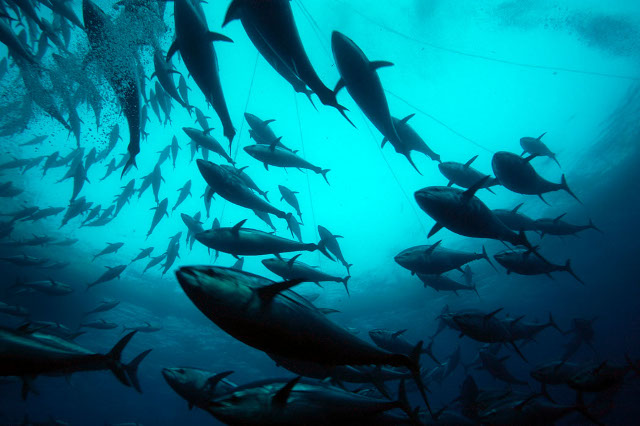 The Black Fish have been working on the ground in Croatia for several weeks investigating the country's controversial tuna industry. It was three days ago when our crew members witnessed the slaughter of several tuna fish and decided to intervene. Members of our diving team were able to pass by security and entered the water late at night to free the fish.

Bluefin tuna are one of the world's largest and fastest fish as well as the most endangered of all tuna species. In recent years the bluefin tuna has been heavily overfished in the Mediterranean Sea to meet the demand for prized sushi, mostly destined for the Asian market. The International Commission for the Conservation of Atlantic Tunas (ICCAT) is the international body tasked with the conservation of bluefin tuna populations but has proven ineffective in its attempts to combat illegal fishing and poaching of the threatened species.

New measures were agreed upon two years ago which included new rules on quotas and a minimum landing size of 30kg. This meant that only fish over 30kg would be allowed to be caught, allowing younger fish at least one spawning cycle before they are caught and killed. However, along with these new measures ICCAT also agreed on an exemption allowing countries fishing for bluefin tuna in the Adriatic Sea to catch juvenile (baby) fish. This has been a disastrous decision for the bluefin as animals are killed off before they have had a chance to reach sexual maturity.

Wietse van der Werf, co-founder of The Black Fish: "This exemption to the ICCAT rules is a form of legalised poaching. By giving in to the tuna industry lobby and allowing this type of destructive fishing to continue, ICCAT has clearly failed the bluefin tuna. It is increasingly clear that any chances of saving the bluefin tuna through conventional means are failing and it is for this reason The Black Fish has kicked off its new bluefin tuna campaign with this action. It is about time we ended Croatia's special treatment and worked towards real measures that put a stop to the overfishing of bluefin tuna."

The company which owns the tuna farm where the fish were released is called Kali Tuna and is part of the US based company Umami Sustainable Seafood. Umani is a major player in the bluefin tuna industry with operations in US, Mexico and Croatia. The firm went public last year with shareholders from around the world now cashing in on the company's lucrative bluefin tuna trading, which is set to have landed them with over $54.000.000 US in profits last year. With slogans such as 'Aquaculture - Growing to the tune of Mother nature' and 'Keeping Bluefin tuna stocks thriving', the company is keen to portray itself as a 'sustainable' bluefin tuna trader.

"With over 90% of Atlantic bluefin tuna populations wiped out in the last 30 years, this seems nothing more than an attempt at greenwashing their immoral and damaging operations. The truth is that this company is directly responsible for the overfishing of threatened bluefin tuna populations in the Mediterranean Sea and driving the species literally towards the brink of extinction. The only reason Umani is keen to invest in its sustainable image is because it secures future profits to their shareholders." argues van der Werf.

The Black Fish is committed to highlighting the illegal and destructive practices of the bluefin tuna industry and where possible, protecting individual animals of this endangered species from harm. Please consider supporting us or getting actively involved in our growing marine conservation community. For more information, please see our website or follow us through Facebook and Twitter.