Our friend Noureddin Mohamed died in suspicious circumstances in Calais in the early hours of Saturday morning (7 July 2012). Another of the thousands of deaths on Europe's borders. Another police cover-up. But we will not let him be forgotten. 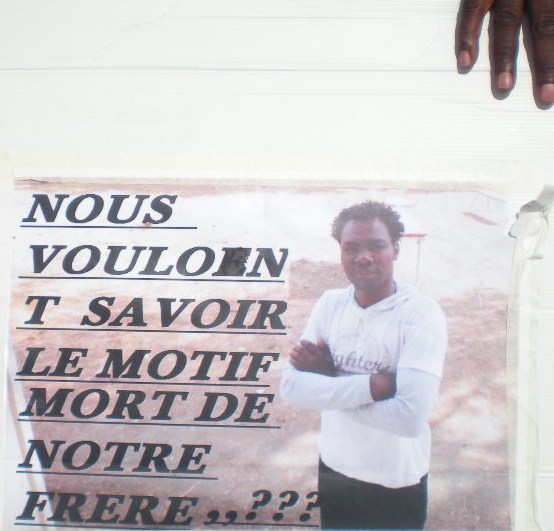 at the town hall

Our friend Noureddin Mohamed died in the centre of Calais in the early hours of Saturday morning (7 July 2012). Noureddin was 28 years old. Originally from North Darfur, Sudan, he had been in Calais for more than four years. He was well known and loved in Calais, and leaves many grieving friends. He died just some 200 metres from the Sub-prefecture (government office) where he had recently been granted leave to remain in France as a refugee.

That night, Noureddin had been out with a group of friends in the town centre. But a normal night out in Calais, if you are black or look “foreign”, means the constant danger of harassment and aggression from the police. In Calais companies of CRS riot police patrol the streets night and day with specific orders to stop anyone who looks like a migrant, and arrest anyone who can't show the right travel documents. Despite a recent French appeal court ruling against such racist policing (see notes), nothing has changed.

According to Noureddin's friends, as they left a bar near the main street Rue Royale, they were once again stopped aggressively by the police. Refugees are used to this treatment in Calais, and generally shrug it off. Noureddin and his friends split up, and Noureddin left alone on his way home. Minutes later he was dead. At 3.30 am, his body was dragged out of the canal 200 metres from the Sub-Prefecture.

Noureddin's friends do not believe that his death was an accident. And they do not believe the official story, which was immediately parroted without further investigation by the local press. According to the police, Noureddin stole a mobile phone from a woman, her friends chased him, and Noureddin jumped into the canal where he drowned. Everyone who knew Noureddin insists that he was not a thief, and had never done anything like this. Nor do they believe that he simply “jumped”. The police have provided no evidence for their story, except the word of the three people who are supposed to have chased Noureddin.

We cannot say, at this point, whether the police were involved in Noureddin's death. We do not currently know the truth about the three people who are supposed to have chased him. We do know that racist attacks against migrants are all too common in Calais, sometimes involving local fascist groups, as well as the police themselves. Whatever happened that night, Noureddin's death deserves a proper investigation.

Instead, the case was closed immediately, and the police have refused to perform an autopsy. On Wednesday (11 July) Noureddin's uncle submitted an official demand to the state prosecutor for an inquiry into “murder by persons unknown”. According to legal counsel, this demand means that the authorities should now perform an autopsy and reopen the investigation. So far, though, there has been no official response.

Every day this week, friends, family, and their supporters have held demonstrations demanding justice for Noureddin. On Tuesday (10 July) around 60 people – not only Sudanese but Afghan, Eritrean, French, and others -- demonstrated outside the central police station. They were met by a show of force including around 20 CRS riot police, with flashball guns, who blocked off all the streets around the areas.

Undeterred, on Wednesday (11 July) members of the Darfuri communities from Paris and Belgium arrived to join another demonstration outside the Town Hall. They carried placards with pictures of Noureddin, demanding “We want to know the reason for the death of our brother.” The mobilisation continues today (Thursday 12th), and solidarity demonstrations are also planned in Paris, Lille, Germany, London, and elsewhere in the coming days.

Passed over in silence.

Noureddin's story is far from unique. There is no accurate count of how many migrants have died in Calais, their deaths ignored, the facts covered up or altogether unreported. Just to give one recent example, Noureddin's story raises grim parallels with the death of a young Eritrean man, Ismael, whose body was found at the bottom of another canal bridge on 22 December. The police immediately closed the case, writing it off as suicide, without any evidence for this conclusion. Again, the authorities refused an autopsy or any further investigation. Ismael had no family members nearby, the police refused to let his friends even see the body, and threatened them with arrest by immigration authorities if they returned to the police station. Eventually one white friend, a French citizen, was allowed to identify the body.

In the case of Zenebe, whose body was found on 9 April in the deserted lace factory where he was living, the police do claim to have launched an investigation, but there has been no outcome from this so far.

On 22 April 2011 the body of a 24 year old Afghan man was dragged from another canal in Calais. Again, the police claimed he had drowned accidentally. He was being chased at the time by immigration police (PAF) officers.

The deaths in Calais are just a few of the many lives lost at Europe's borders. According to the press monitoring researchers of “Fortress Europe” blog, at least 18,244 deaths at European borders have been reported by media since 1988. Many more, for sure, go unreported.

Most of these die in the Mediterranean sea. On Monday night (9 July) a young Eritrean man was rescued off the coast of Tunisia, the sole survivor of a boat carrying 55 Eritrean, Somali and Sudanese refugees.

In the most infamous recent story to come to light, over 60 African refugees died as their boat drifted for 11 days in March 2011. The boat was in contact with the Italian coastguard, a military helicopter (country unknown) flew over and lowered bottles of water, and finally it drifted in full view of an aircraft carrier, probably the French ship Charles de Gaulle. No one came to their rescue.

In Calais as in the Mediterranean, as at the Greece-Turkey border graveyard of the Evros valley, the lives of migrants from Africa and Asia are not worth saving, their deaths are not worth recording or investigating. Police and other state authorities are often actively involved in these deaths. Other times, they are merely complicit. Police and other officials cover up killings of refugees and refuse to investigate suspicious deaths. A migrant's death doesn't mean the same as a citizen's. Because a migrant's life is not worth the same as a citizen's.

It is not only the state authorities who are complicit in these killings at the border. Amongst others, we should note the role of the media. Not all deaths in Calais are even reported. But as Noureddin's body was found in full public view in the town centre, his death couldn't be ignored. Both local newspapers (Nord Littoral and Voix du Nord) immediately ran the police story. The supposed “theft” of a mobile phone was reported as fact. Journalists made no attempt to investigate further. No one tried to contact Noureddin's friends and get their side of the story. Noureddin was immediately written off as a thief and his death as an accident or even, perhaps, a well-deserved end.

This complicity in silence and slander makes the life of a migrant cheap. Racist police officers know that they can beat, chase, and continually harass migrants without fear of sanction. As people were leaving Tuesday's demonstration, one CRS (riot police) officer called after them: “be careful you don't fall in the water”. It's certainly clear for “civilian” racists and fascists, too, whose side the authorities are on. So long as deaths go without acknowledgement or reply, it's open season on migrants in Calais.

The mobilisation in Calais this week has seen demonstrations every morning outside the police station and town hall, with Darfuris now coming from Paris and Belgium to join the demos. In the repressive conditions of Calais, it takes courage to come out and demonstrate on the street if you don't carry the right papers. But anger, sorrow, and solidarity overpower fear. The anger and protest now begins to spread, amongst Darfuri communities elsewhere in France and beyond, and to other migrants and friends. Can this become the start of a movement against the border killings? Will we find the strength to say “Enough”?

Justice for Noureddin, and for all our sisters and brothers on the borders.

The Calais Migrant Solidarity dossier detailing the extent of repression in Calais, "This Border Kills", can be downloaded here in English and French:

Article in English on the new court ruling against arrest of migrants without criminal suspicion:

“Fortress Europe” research on deaths at the borders:

Deaths in the mediterranean: