Turned out nice again - despite pre-demo smears from the local rag and assortment of Tory wankers - Smash EDO succeeded in shutting down the arms factory for the day and a blockade and lock-on is still in place at Home Park Rd. 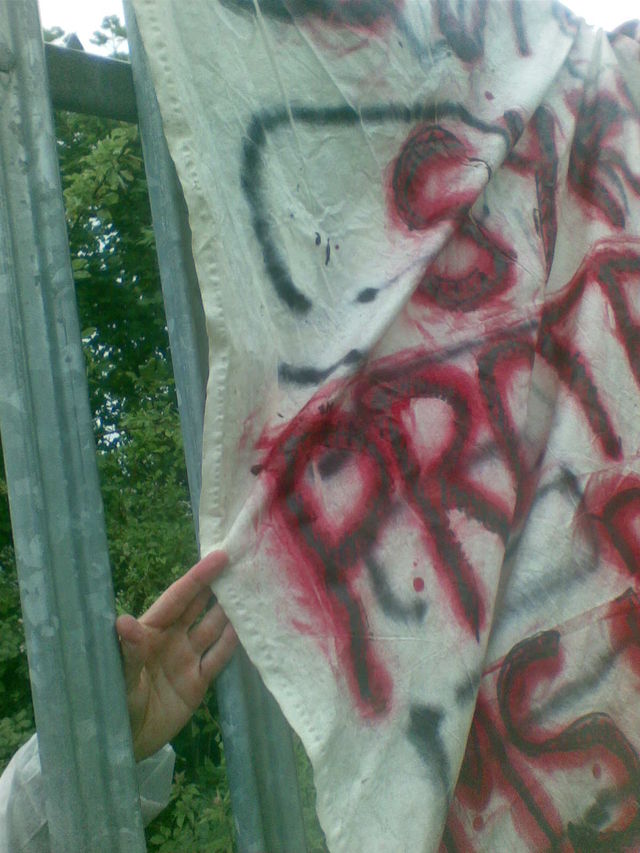 Banner outside EDO despite police cordon

Smash EDO has outmanoeuvered Sussex Plod, and the Argus today with a well worked campaign of direct action against the Brighton arms company. Around 60 'weapons inspectors' marched up Lewes Road and got to EDO ITT at around 3pm. Sussex Plod had set up a metal barrier blockade at the top of the Home Park Rd to stop protestors getting to the factory. This backfired after two campaigners breached the barriers and scaled the narrow gap between the metal fence and infamous verge. Once outside the factory they avoided arrest and dropped an anti-arms industry banner over the fence right in front of the factory. There is currently a six people lock-on with the arm pipes disguised beneath cardboard missiles on the march. Nothing like the detective skills of the all-new police liaison officers, hey lads and lasses. Get down there now to support those locked on.