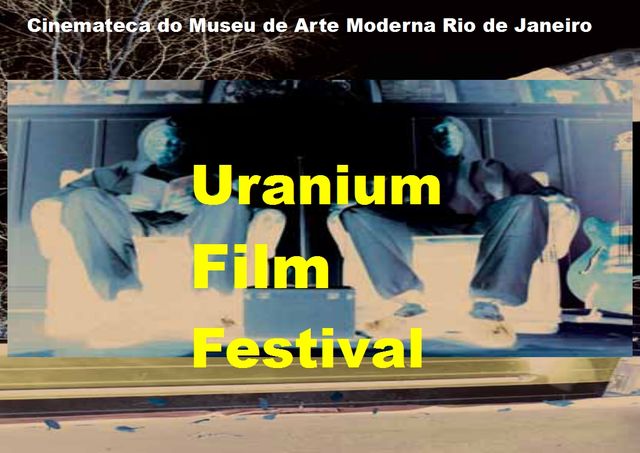 During three Weeks the Festival screened 54 documentaries, movies and animated films from all continents. Parallel to the Festival a photo exhibition by US-Photographer Robert del Tredici and the Atomic Photographers Guild was shown in the foyer of the MAM Cinemateca. After Rio de Janeiro the Uranium Film Festival is now travelling. The next stop will be Berlin at the beginning of October!

About the Yellow Oscar Winners

Marko Kattilakoski’s movie Coffee Break (Fikapaus) from Sweden received the Yellow Oscar in the short film category. “Coffee break is a movie with a minimal budget but a lot of heart. It is a dark, ironic Swedish comedy-thriller about Chernobyl, the worst nuclear disaster in history”, said festival director Norbert G. Suchanek. “The nuclear issues need films like Fikapaus. And I hope that the Yellow Oscar stimulates not only Marko to continue his genius work, but also other `nuclear´ filmmakers to follow his example.”

In his award statement Marko Kattilakoski said: “Coffee Break was a story I had to tell. The team I gathered believed in the idea and we made the film with minimal budget and a lot of heart. I was very proud and happy that "Coffee Break" was accepted to the festival. I am even prouder and happier now receiving the Yellow Oscar 2012.”

Bill Keislings "Not For Public Release: A nuclear incident in Lock Haven”, produced in 2010 won the festival’s Best Feature Award. The documentary examines the problem of privatized Pentagon nuclear waste, and how the government's secretive handling of this sensitive issue places unsuspecting citizens in unacceptable risk.

„Thank you for the good news that my documentary `Not For Public Release´ has won the Yellow Oscar Award”, said Bill Keisling. “The nuclear incident in Lock Haven, Pennsylvania, and its many victims, have received no publicity whatsoever from the corporate media in Pennsylvania and the United States. The Yellow Oscar Award from the Uranium Film Festival will not only shine light on my film, it will help to illuminate the plight of the many nuclear victims in the United States, most of whom are usually completely ignored by the government and media here.”

Last but not least the festival honoured “Leonids Story” by German Film director Rainer Ludwigs and Ukrainian Producer Tetyana Chernyavska. Leonids Story is an outstanding, heartbreaking animated documentary about the nuclear disaster of Chernobyl 1986. Judge Leo Ribeiro, Professor for animated film at Rio de Janeiro’s Univercity PUC (Pontificia Universidade Catolica) said: “Leonids Story is an Animated-Documentary Short, a genre that is booming right now. Rainer Ludwigs mixes digital and traditional techniques in a perfect balance. The use of images and pictures mixed with drawings creates a dialogue between reality and imagination that the film leads to a shocking end.”

In his impressive Award speech Rainer Ludwigs said in the Cinemateca of Rio de Janeiro’s Modern Art Museum: “We are happy to be part of this festival, as filmmakers and as viewers. Here I saw films that taught me, that this chain begins with the unhealthy mining of uranium, gets worse during the whole process until the reprocessing of spent fuel, silently polluting complete coast areas, nature paradises, bringing cancer and other diseases, destroying peoples health and professions. The festival has opened our eyes. It has shown us, nuclear problems are not only national problems but have a worldwide structure. A festival like this is an important institution and may be the only weapon against this worldwide crime, which brings profit to few and ruins the life of millions. This festival has opened our horizons, so we hope that it will be established in cities all over the world.”

Rainer Ludwigs: "We would like to thank the Uranium Film Festival Team for their enthusiasm, for their initiative, for the invitation and being so heartily welcomed in this great city Rio de Janeiro, in this country which represents so well most of the natural wonders of our world.”

"The 2nd International Uranium Film Festival in Rio de Janeiro is over, but it continues with travelling festivals", declared the festival directors Marcia Gomes de Oliveira and Norbert G. Suchanek at the end of the Ceremony. "A selection of the best films of the Festivals 2012 and 2011 will be presented during the next travelling Uranium Film Festival in Berlin, planned for October.