Solidarity in London, Wrexham, Brisbane as Bradley Manning is back in court in US

Accused WikiLeaks whistleblower Bradley Manning has been back in court at Fort Meade, Maryland, US this week for another pretrial hearing. Solidarity action has been organised outside the court, elsewhere in the US including 'Fort Manning' occupation of the federal courthouse in LA and around the world including London, Wrexham and Brisbane. For some background and a summary of the current situation at court, see this antiwar.com interview with Nathan Fuller of the Bradley Manning Support Network and Kevin Gosztola's blog. 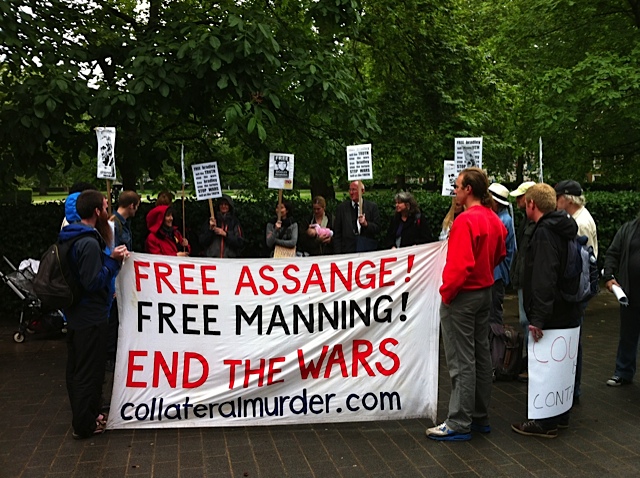 Vigil outside US Embassy, London 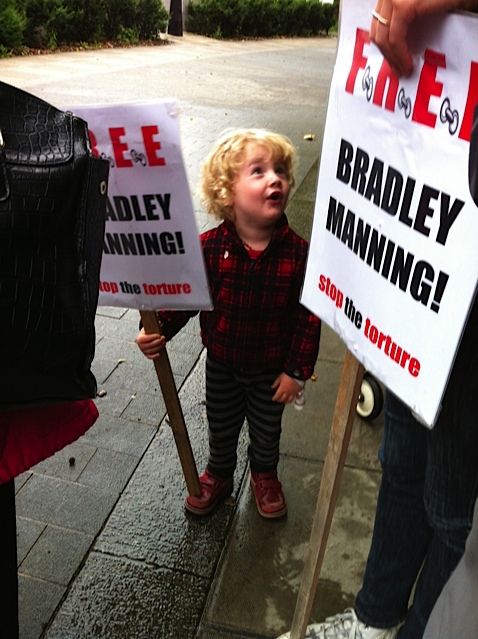 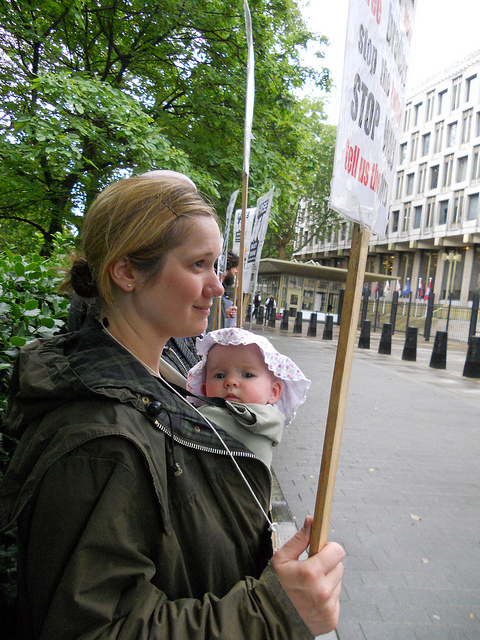 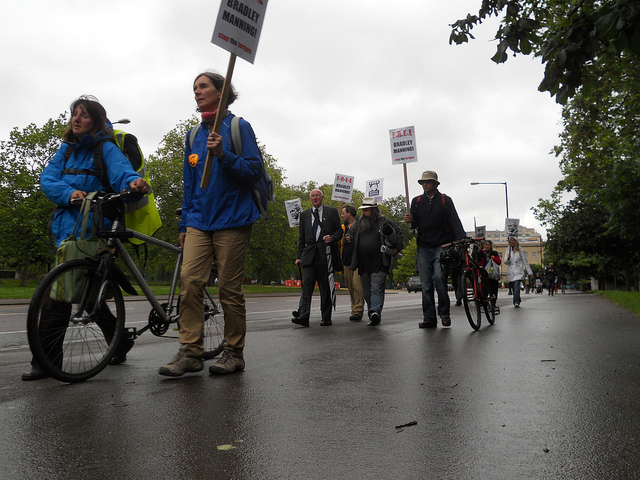 Walking between US and Ecuadorian Embassies 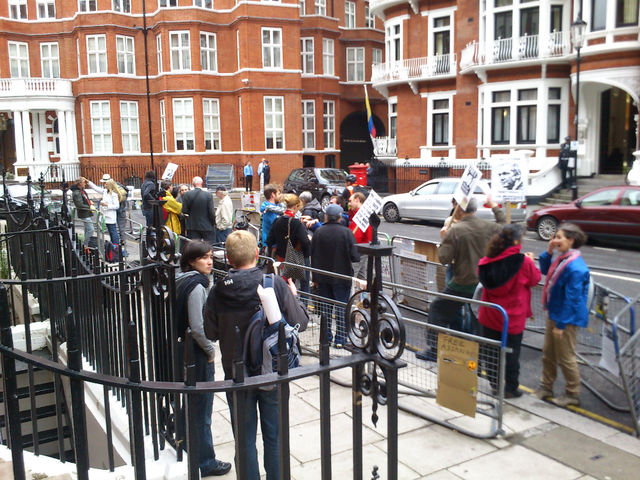 Outside the Ecuadorian Embassy 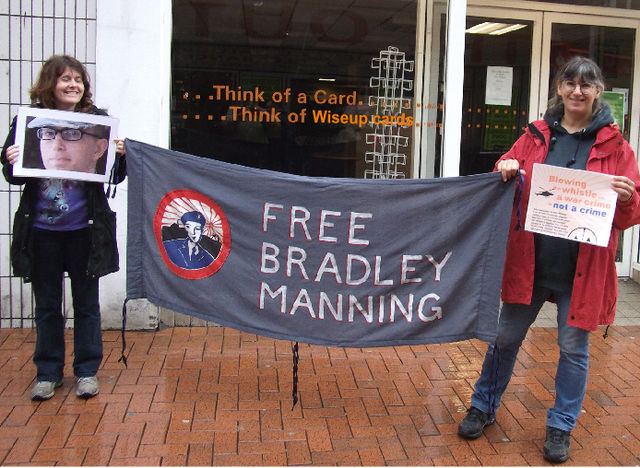 "Yes we Can!" Brizzy Bins Obama for Brad

This report is based on an original posted on the wise up for bradley manning blog.

The WISE Up network reports from 16 July: London, Wrexham and Brisbane

Vigil at the US Embassy in London

After over two years in prison awaiting trial for allegedly leaking information revealing US war crimes to the organisation WikiLeaks, PFC Bradley Manning is again in front of a US military judge for another pretrial motion hearing. Today, in solidarity with Manning, 25 people gathered in London's Grosvenor Square to face the US Embassy in silence.

Afterwards information was exchanged on the current state of play in the Manning case, Julian Assange's current position and possible future action which will be publicised once dates are set.

Onwards to the Ecuadorian Embassy

We then walked from the US Embassy to the Ecuadorian Embassy where WikiLeaks editor Julian Assange has sought political asylum. People stood for Assange for a couple of hours despite the poor weather.

When people are subjected to persecution for resisting war it is our duty to support these people in any way we can. Offering support by our physical presence on the streets is a simple and effective act of solidarity.

A daily vigil has taken place outside the Ecuadorian Embassy since Assange sought refuge there almost a month ago. Please drop by if you are passing through London.

More photos from yesterday by IT Friends of Bradley Manning.

Vigil and leafleting in Wrexham

Two of us took to the streets in Wrexham today for a couple of hours in support of Bradley Manning, who has connections with Wales, lived here as a teenager and has family in Pembrokeshire. There was interest in Bradley's Welsh connections, his plight at the hands of the US, his young age and his possible fate if convicted.

We held a banner, handed out flyers and engaged in conversations about Brad with passers-by...

...including one rather bizarre conversation with a man who thought our banner related to a past character in the soap opera EastEnders who he insisted was also called Bradley Manning. When I had a chance to look it up later, I discovered that the character was in fact Bradley Branning. I guess it's an understandable mix-up in a world where the line between fiction and reality is deliberately blurred to divert us from the things we should be aware of and concerned about; for instance, stories about soap opera characters frequently masquerade as news reports in national newspapers and online. I didn't have the presence of mind to ask him what he thought we were doing with a banner calling for the freedom of a fictional character killed off by the BBC over two years ago.

Knit-in at the Sit-in: Hats from Occupy Berkeley, California

WISE Up for Bradley Manning network took delivery of a box of hats and scarves from Occupy Berkeley Knit-in the other week, including one with 'stars and stripes' that we've been asked to pass on to a member of Brad's family. The Knit-in makes warm things for occupiers and activists in cold places. Previous recipients include Occupy DC and Occupy Newfoundland, women activists in Cairo and anti-nuclear protesters in Fukushima.

Given that it's (allegedly) summer here in Britain, we thought we'd store them until winter, but 16 July in Wrexham was so wet and miserable we were glad of them. Big thanks to Occupy Knit-in for your solidarity.

Our man in Australia, Ciaron O'Reilly, has been busy organising solidarity for Bradley Manning and Julian Assange in Brisbane, including a vigil on 16 July to mark the start of this latest pretrial hearing with the theme "Yes We Can!" Brizzy Bins Obama for Brad.